This article is about the public television organization in Hungary abbreviated as MTV. It is not to be confused with MTV Hungary.

First pioneer transmissions were in Hotel Gellért in 1936. Test transmissions commenced in 1954, however these were generally with stills or short clips of motion pictures, merely for experimental purposes. Regular test transmissions could be received from February 23, 1957. Transmissions began officially on 1 May 1957, when the May Day ceremonies were brought to the viewers for the first time. Daily news programmes began on July 2, 1957. The television service began its career as part of Hungarian Radio, which was renamed "Hungarian Radio and Television" on August 18, 1957. MTV suggested the establishment of an international organisation for exchanging television material, which was to be named Intervision. The first four members of the organisation were Czechoslovakia, the German Democratic Republic, Hungary and Poland.

By 1959, Hungarian Television had over 50,000 subscribers. In 1960, the Corporation decided to establish an archive, where its programmes are stored even today. In less than ten years of operation, MTV had some 2.7 million viewers by 1964. Studies showed that there were about 3-5 viewers per television set. Another study revealed that by 1965, 46% of the inhabitants of rural areas named television as their choice of entertainment, instead of reading (25%) or radio (10%).

Theatrical transmissions were popular at this time: in 1966 23 plays were broadcast from Budapest, 20 from other cities. Also, 25 television movies and five musicals were transmitted this year.

1969 brought the one millionth subscriber, which meant about 4 million viewers. The first colour recording was made this year: it was Béla Bartók's The Miraculous Mandarin. Although the Orion company presented its first colour television set, transmissions continued to be in black-and-white until 1971.

1971 brought the first regular transmission in colour, and the test transmissions of a second channel were begun as well. This decade was probably the most proliferous in the history of the whole company, with thousands of hours of programming made.

Annual programming time reached 4.300 hours, equalling to 83 hours a week. Teletext services commenced in 1981, called Képújság (Picture Newspaper), and television manufacturers started including teletext decoders in their sets. Long-running programmes were started in this decade, including Ablak (Window) and Panoráma (a foreign affairs programme). Regional programming began in 1984 in Pécs, and cable television began in Székesfehérvár the same year. RTV, a programme guide similar to BBC's Radio Times was bought by 1.4 million viewers weekly. MTV's gradual decline began in 1985, this was the final year when MTV was self-sufficient.

The first broadcast of a telenovela on Hungarian television happened in the mid-1980s with the premier of the Brazilian Escrava Isaura (Hungarian title: Rabszolgasors - "Slave Destiny" in English). The first Hungarian soap opera Szomszédok (Hungarian for "Neighbors") also started its 12-year-run on 7 May 1987 and was broadcast every second Thursday.[6]

By the late 1980s, experimental digital television recordings were made, but at the time only in studios. From 1988 seniors of 70 years were exempted from payment of the licence fee. Minority programmes in other languages began too: these programmes were recorded generally in regional studios, primarily in Pécs and Szeged. MTV2 was given some independence from its sister channel MTV1, and just like at the BBC, they were given separate controllers.

By 1989 the service began broadcasting five days per week to prepare the seven days, as previously Monday only. Some exceptions were made from this practice, for example when the first Hungarian cosmonaut, Bertalan Farkas entered space. Nap-kelte (Daybreak), a daily television magazine programme began in 1989, the first programme to be made by an independent Hungarian television company, namely Nap-TV.

With the changeover from socialism, MTV was completely re-structured, some posts were abolished while others were created. Some programmes were axed from both channels, and new ones were started. This decade was a very hectic time in the life of the Company, as TV-presidents seemed to come and go, and so did the programmes.

MTV was admitted as a full active member of the European Broadcasting Union on January 1, 1993. In 1992, a new public service television station was started, and was named Duna TV. This was completely independent from MTV, although some collaboration exists between the two. Commercial channels became available to cable viewers in Budapest the same year.

In 1997, TV2, a commercial channel was to be launched on the frequency where m2 used to be. However, MTV argued that by doing this, its audience would be given to the new channel as a present, which would mean severe disadvantage to both MTV and RTL Klub, the other debutee commercial channel. The authorities decided to leave the frequency empty, and allocate a new frequency to TV2. m2, however, was still moved to satellite and cable reception only, which, at the time was quite rare. The programming available on MTV-2 was aimed at audiences which were most unlikely to receive the channel, so this meant a severe handicap for the company. Currently the company is recuperating from the decline earlier.

During the 1990s the MTV gradually lost its independence and became the voice of the all-time government, often accused of biased on commenting news . It is one of the most popular sources of news, and its background news programmes such as Az Este (The Evening) are both liked and internationally recognised. Its line-up of programmes feature long-running shows, such as the science news programme Delta, whilst other programmes like A Hét (The Week), a weekly review programme and Ablak (Window), an afternoon-long umbrella programme featuring general interest programmes, were both axed in recent years.

MTV is continuously underfinanced, just like many other public service channels around the globe, and is therefore struggling to produce programmes.

Whilst remaining entirely state-owned, the company was re-organised as a Closely Held Corporation. Funding changed significantly in 2002 with the end of the mandatory television license fee levied on all household with a television set. Following this change, funding for MTV instead began to come from government grants and advertising.[7]

The 2006 protests didn't leave the headquarters unscathed; in fact, it was occupied by the rioters for a short time.

In 2000, m2 began broadcasting 24 hours a day, with repeats from its sister channel, m1 and from its archive library and from the Hungarian National Digital Archive and Film Institute (Magyar Nemzeti Digitális Archívum és Filmintézet).

In 2011, most of the assets and employees of MTV were transferred to the newly created Media Service Support and Asset Management Fund (Hungarian: Médiaszolgáltatás-támogató és Vagyonkezelő Alap, abbreviated MTVA), a government organization controlled by the Media Council of Hungary.[1] Magyar Rádió and Duna Televízió were also made a part of the MTVA, which, together with MTV, unified all three public service broadcasters in Hungary for the first time. Additionally, the Hungarian news agency Magyar Távirati Iroda was merged into the MTVA and has since been responsible for the production of all news content aired on the three broadcasting organizations.[2][8] 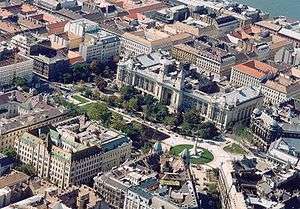 The Hungarian Television's central building was located in the heart of Budapest on Szabadság tér (Freedom Square), across the Hungarian National Bank (Magyar Nemzeti Bank), the U.S. Embassy, and near to the Parliament. The building gave room to the Stock Exchange before the war. It is sold now and MTV has moved to the outskirts of Budapest to a purpose-built modern building. The old headquarters can be reached by a five minutes walk from Kossuth tér where Metro line 2 stops.