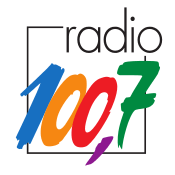 radio 100,7 is a public-service radio station in the Grand Duchy of Luxembourg. Broadcasting in the Luxembourgish language, the station's principal focus is on culture and information, although entertainment – in the form of a relatively wide spectrum of music, with the accent on classical – also features prominently.

Established under the provisions of Luxembourg's Electronic Media Act of July 1991, and run by the Établissement de Radiodiffusion Socioculturelle du Grand-Duché de Luxembourg (ERSL), the station began broadcasting on 19 September 1993 as honnert, 7: de soziokulturelle radio ("one hundred point seven: the socio-cultural radio station"). The name, derived from its allocated FM frequency of 100.7 MHz, was changed in 2002 to the somewhat snappier "Radio 100,7".

Radio 100,7 has been a member of the European Broadcasting Union since 1997 and co-operates closely with other European public-service broadcasters.

On weekdays, the station offers a 1-hour English-language program, Time Out, presented by Benny Brown, which starts at 6:35 pm, with a roundup of the day’s main national news, and a mix of music that is rarely found on the radio nowadays (Blues, Rock, Country, Indie Rock).

In 2015, the radio launched for the first time in Luxembourg a competition for original radio plays. In spring 2016, a second contest started under the theme “Social media and their impact on time and culture”.