Radio Television of Serbia (Serbian: Радио-телевизија Србије – PTC or Radio-televizija Srbije – RTS) is the public broadcaster in Serbia. It broadcasts and produces news, drama, and sports programming through radio, television and the Internet. RTS is a member of the European Broadcasting Union.

Radio Belgrade began its broadcasts in 1929. The first news announcer in 1929 was Jelena Bilbija. The first radio program in Serbia was broadcast in February 1924, when released radio signal was transmitted from the transmitter in Belgrade suburb of Rakovica. After five years, on March 24, 1929 Radio Belgrade began with regular broadcasting of its program from the building of the Serbian Academy of Sciences and Arts.

The Second World War interrupted the broadcasting of the national radio program in Belgrade. During the war, there was a German radio station, which broadcast programs in Serbian language. The emergence of the current Radio Belgrade followed the liberation from the Nazis on November 10, 1944.

The first televised broadcast was on 23 August 1958, an edition of the Dnevnik (Journal) news programme with Miloje Orlović, Branislav Surutka, Olga Nađ, Olivera Živković and Vera Milovanović. The first RTB program was broadcast from the Belgrade Fair and from a new TV Studio build there. From 1961, RTS began to use quadruplex video tape recording equipment. The Sixties saw dramatic development in all genres of TV programs. TVB became famous by its sitcoms (directed and written by Radivoje-Lola Djukić, Novak Novak and others (unfortunately, only a small proportion is preserved, owing to implicit censorship and shortage of tapes). Also, TVB had excellent documentary programs (series Karavan, Reflektor and others) and quizzes. By 1970, the entire territory of Serbia was covered by the RTS signal. On 31 December 1971, TVB started broadcasting in PAL color system on its second network. A new AM (radio) broadcast equipment in Zvečka, Obrenovac, with 2000 kW transmitter was erected in 1976.

After the political turmoil in the 1970s (against the "liberals") the program of RTB became more sterile, however, in the 1980s it reached the zenith.

In 1989, preparation for the formation of the RTS system officially began. That same year, 3K TVB started broadcasting as the youth, alternative TV channel. Along with it, Radio 101 started broadcasting in Belgrade and Vojvodina. Radio 101 was the more commercial youth radio, carrying pop and turbo-folk hits. It was intended to complement the more alternative Belgrade 202.

In 1991, all public broadcasters started their merger into RTS.

Main article: Role of the media in the Yugoslav wars

The establishment of Slobodan Milošević's regime led to one of RTB's most troubled eras in its history. Hundreds of journalists were fired for not complying with Milošević's propaganda. During the protests of 9 March 1991 the regime's opposition attacked the RTB building, calling it a "TV Bastille". In 1992 Radio Television Belgrade, together with Radio Television Novi Sad (RTNS), Radio Television Pristina (RTP) and many local government owned radio stations, became part of Radio Television of Serbia, a centralized and closely monitored media network intended to be a propaganda tool for Milošević and his government. The most notorious of the network's TV programming during the Milošević era was Dnevnik (Daily news), which was used to glorify the "wise politics of Slobodan Milošević" and to attack "servants of Western powers, forces of chaos and despair", or the Serbian opposition.[3] 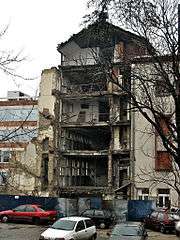 The Serbian media during Milošević's era was accused by The New York Times of embracing Serbian nationalism and promoting xenophobia toward other ethnic groups in the former Yugoslavia.[4] Serbian state media during the wars featured reports which demonized Bosnians and Croats. Thee negative media depictions of said ethnic groups are examples of Milošević's state media promoting hysteria and to anger Serbs to support the Yugoslav wars.[5] The station drew little attention to Serbian war crimes committed against Croats and Serbs. Reports about Serbs being massacred by Bosnians and/or Croats were broadcast daily in order to create anger among the Serb and Montenegrin populace.[6] Examples include the American embassy reporting of falsified stories created by state media of Bosnians and Croats killing nuns and babies.[6]

During the Bosnian war, when Sarajevo was under siege, Radio Television of Serbia newscasts showed a still photo from Sarajevo in the 1980s, untouched, in order to create the image that Sarajevo was not under siege.[7][8]

During the Kosovo war, Serbian state media denied the Gornje Obrinje massacre and the Vučitrn massacre, committed by Serb paramilitaries and Serbian Police against Albanian civilians on 26 September 1998 and 2 and 3 May 1999, respectively. A Serbian television report described the BBC accounts of atrocities committed by Serbian police in Kosovo as "lies and manipulation".[9] In addition, Radio Television of Serbia never reported the 800,000 Kosovar Albanians expelled by Serbian police and paramilitaries (see Operation Horseshoe), except when a convoy of fleeing Kosovars was killed by NATO bombs.[7]

On 23 April 1999, NATO bombed the RTS headquarters in downtown Belgrade, killing 16 people, mostly technicians. In 2002, Dragoljub Milanović, the general manager of RTS, was sentenced to 10 years in prison because he had failed to order the workers in the building to evacuate, despite knowing that the building would be bombed.[10] Amnesty International has described the NATO attack as a war crime.[11]

On 5 October 2000, the same RTS building was demolished and partly burned during the riots against Slobodan Milošević. For some time after 5 October 2000, RTS was officially called Nova RTS (New RTS) to symbolize liberation from control from Milošević's regime and to symbolize a rebirth in the broadcaster's history.[12]

After Milošević's removal from power, RTS underwent reconstruction in order to regain respect amongst much of its audience which the network had lost during the '90s. Particular emphasis was put on news programming which suffered greatly during the '90s. In 2006 RTS became the most viewed television network in Serbia and has retained this position since then. Early that year, RTS decided to shut down one of its television channels. 3K (Treći kanal RTS-a) was a channel dedicated to the youth, which, however, became the main film, series and sports channel in the late 1990s and the early 2000s..

In 2007, the BBC World Service Trust launched an extensive training programme at Serbia's national broadcaster. This 30-month project, which was funded by the European Union, provided extensive journalism, craft and management training to all levels of staff at the broadcaster.[13]

In 2008, RTS underwent major changes as it celebrated 50 years of existence. The network launched its digital network which uses DTT Digital terrestrial television via several DVB-T transmitters. It has also invested millions in new technology. The new high-definition television system was first put in place in May for the 2008 Eurovision Song Contest while on 26 November 2008, RTS began airing its new channel ‘’RTS Culture and Arts’’ which is a DTT-only channel, transmitted in 16:9 standard definition format, with stereo and 5.1 digital audio.[14] During 2008 the networks web presentations was greatly improved. On 23 August 2008, the 50th anniversary of Dnevnik (the RTS news bulletin) was celebrated. A special edition of the 19.30 Dnevnik was aired with Mića Orlović, the first newsreader to host the news in Serbia, hosted the special addition helped by Dušanka Kalanj, the first female newsreader in Serbia. The theme of the evening's news included a reflection on the past 50 years a projection of the future as well as the news of the day. The weather was read out by Kamenko Katić, the first weather forecaster. All babies born on 23 August 2008, received a flat screen television set from RTS. On 9 September 2009, at 21.00 CET, RTS launched its first high definition channel – RTS HD.

RTS was the host broadcaster of the semi-final and finals of the Eurovision Song Contest 2008. Serbia gained the rights to host the contest after Marija Šerifović's 2007 victory in Helsinki, Finland. The Eurovision Song Contest 2008 was held in Belgrade. RTS broadcast the event as usual (since 2004) on RTS1. The host couple were Jovana Janković and Željko Joksimović. The rating of the final of Eurovision was overwhelming with 4.560.000 people tuning in to watch making it the most watched event on Serbian television as well as on RTS.[15]

In 2011, RTS issued a written apology to the citizens of Serbia and former Yugoslavia for its actions during the regime of Slobodan Milošević and the break up of Yugoslavia. The letter apologises for the network’s senseless reporting and the hurt it caused to the public. It vows never to let history repeat itself.[16]

On 23 August 2014, at the 56th anniversary of the broadcaster, RTS got a new visual identity: focusing on new on-screen logos introduced on 18 February for their terrestrial channels. At the same day, the watermarks changed themselves to fit into the 16:9 format.

RTS has two TV centers: in addition to the main TV production center within RTS headquarters complex in the downtown Belgrade, there is also TV production center in Košutnjak (housing two largest studios: Studio 8 and Studio 9). In accordance to the EBU, RTS offers live programming on its website.

There are currently five channels:

News programmes are produced in Belgrade, however the network has a total of 24 news offices in the country. RTS also has its own correspondents and offices outside of Serbia in: Moscow, Brussels, Paris, Rome, Vienna, Washington, D.C., Chicago, and Tokyo.

RTS has the most watched news and current affairs programmes in the country, according to the AGB Nilsen Serbian ratings. The centerpiece of RTS news programming is the Dnevnik (English: Journal), which is the network’s main news programme and is aired on RTS1. The Dnevnik bulletins are aired at 8:00 (runs for approximately 25 minutes), 12:00 during workweek and 13:00 Saturdays and Sundays (around 15 minutes, excluding Sports Review and Weather forecast), 19:30 (between 35 and 40 minutes) and at 23:00 (approximately 20 minutes). The flagship (evening) Dnevnik has been the most watched news programme in Serbia since 2003, averaging between 1.5–2 million viewers nightly.[18]

The following are news and current affairs aired on RTS:

The RTS entertainment is largely based on local production of Serbian drama programmes, soaps and musical programmes. Recently RTS has started investing more in local drama and as a result has been rewarded with high ratings. An episode of the RTS drama Ranjeni orao aired on 15 January 2009, is the most watched scripted drama episode in Serbian broadcasting history with over 3 million viewers.[19]

The following is a list of entertainment programmes produced and aired by RTS (as of October 2011):

RTS also relies on dramas and soaps produced outside of Serbia as well as documentary programmes.

The following is a list of internationally created shows currently broadcast by RTS (as of October 2011):

RTS has an archive of its TV programmes. In addition to 5000+ video tapes in the long obsolete quadruplex format, the archive contains tapes in C-type helical scan, U-matic, beta-SP and digital formats. Also, the archive contains an extensive collection of newsreels, short filmed stories, and feature films on 16 mm and 35 mm tapes.