In this Japanese name, the family name is Koiso.

Koiso was born in Utsunomiya, Tochigi Prefecture on March 22, 1880, as the son of a Samurai family. His father was a policeman.

Koiso graduated from the Imperial Japanese Army Academy in 1900 and went on to attend the Army Staff College. Commissioned a 2nd Lieutenant in the 30th Infantry Regiment in June 1901, he was promoted to Lieutenant in November 1903. During the Russo-Japanese War, he served as Battalion Adjutant in September 1904, Company Commander in March 1905 and was promoted to captain in June 1905.

In November 1910, Koiso graduated from the Army Staff College and returned to the Imperial Japanese Army Academy as an instructor in December 1910.

Reassigned to the Kwantung Army in September 1912, Koiso was promoted to major and Battalion Commander of the 2d Infantry Regiment in August 1914. He returned to the Imperial Japanese Army General Staff Headquarters in June 1915, was promoted to lieutenant colonel in July 1918, and seconded to the Imperial Japanese Army Air Service in July 1921. After his promoted to colonel in February 1922, he was sent as a military attaché to Europe in June 1922, returning to assume command of the IJA 51st Division in August 1923. Returning to the Army General Staff in May 1925, he was promoted to major general in December 1926 and lieutenant general in August 1931.

In February 1932, Koiso became Vice-Minister of War and in August 1932, concurrently Chief of Staff of the Kwantung Army. In March 1934, he was transferred to command the IJA 5th Division (Hiroshima). He then assumed command of the Chōsen Army in Korea from December 1935. Promoted to full general in November 1937, he joined the Army General Staff in July 1938.

Koiso left active duty in July 1938. From April to August 1939, he served in the cabinet of Prime Minister Hiranuma Kiichirō as Minister of Colonial Affairs. He returned to the same post again from January to July 1940 under the Yonai administration. 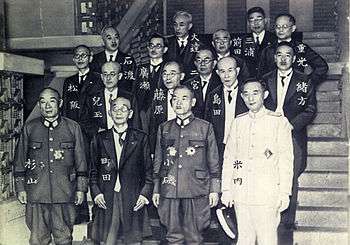 Koiso was appointed Governor-General of Korea from May 1942 to 1944, during which time he gained the nickname "The Tiger of Korea" for his looks rather than his military prowess.[1] His period of rule in Korea was marked by the highly unpopular imposition of universal military conscription of Koreans into the Japanese military.[2]

In July 1944, Koiso was chosen to serve as Prime Minister of Japan after the downfall of the Tōjō cabinet. Late that year, Koiso planned to send Prince Konoye on a peace mission to Switzerland and Sweden, but it came to nothing. Koiso faced strong competition from more senior army officials for the post. The Army strongly favored General Hisaichi Terauchi; however, they could not afford to recall him to Japan from his role as commander-in-chief of all Japanese forces in Southeast Asia. The civilian government, especially Kōichi Kido and Fumimaro Konoe also did not favor Koiso, due to Koiso's previous involvement with the ultranationalist Sakura Kai and its attempted coup d'état against the government in 1931 (i.e. the "March Incident"). These reservations were shared by the Emperor in his Privy Council meetings. Nevertheless, Koiso was selected, as no consensus could be reached on a more suitable alternative.

Koiso was almost a token Prime Minister as he was not allowed to participate in any military decisions. He was not popular with government ministers who favored making peace, nor with those who wished to prosecute the war until the bitter end.

During Koiso's term in office, Japanese forces faced multiple defeats on all fronts at the hands of the Allies. Also during his tenure, on November 10, 1944 Wang Jingwei died of pneumonia in a Japanese hospital in Nagoya, which effectively was the end of the Reorganized National Government of China in northern China. For a time, Koiso considered making peace, but he could not find a solution that would appease both the Japanese military and the Allies. Left with little choice but to continue the war effort, Koiso tried to extend his power over the army by attempting to assume the position of War Minister concurrently with that of Prime Minister, but was unable to legally do so as he was on the reserve list. Koiso resigned in April 1945 when American forces invaded Okinawa and his demands to be included in military decisions were rejected, the same date the Imperial Japanese Navy flagship Yamato was sunk by American aircraft during Operation Ten-Go.[3]

Koiso was an ardent supporter of State Shintoism along with Heisuke Yanagawa, who directed the Government Imperial Aid Association. He restored the ancient sacred rites in the Sukumo river, near Hakone, the "Preliminary Misogi Rite".

After the end of World War II, Koiso was arrested by the Allied occupation powers and tried by the International Military Tribunal for the Far East for war crimes. Upon conviction as a Class-A war criminal on counts 1, 27, 29, 31, 32 and 55, he was given a sentence of life imprisonment.[4] The Tribunal specifically cited Koiso's decisive role in starting the wars against China and the Allies. "Furthermore, despite the fact that Kuniaki Koiso was not directly responsible for the war crimes committed by the Japanese Army, he took no measures to prevent them or to punish the perpetrators when, as Prime Minister, it was within in his power to do so." [5] Koiso died of esophageal cancer in Sugamo Prison in 1950. His grave is at the Aoyama Cemetery in downtown Tokyo.