Not to be confused with Mantsi language.

The Mansi language (previously, Vogul and also Maansi) is spoken by the Mansi people in Russia along the Ob River and its tributaries, in the Khanty–Mansi Autonomous Okrug and Sverdlovsk Oblast. According to the 1989 census, there were 3,184 Mansi-speaking people in Russia.

The base dialect of the Mansi literary language is the Sosva dialect, a representative of the northern dialect. The discussion below is based on the standard language. Fixed word order is typical in Mansi. Adverbials and participles play an important role in sentence construction. The written language was first published in 1868 and was revised using a form of Cyrillic in 1937. 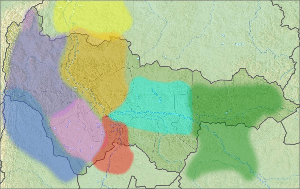 Mansi is subdivided into four main dialect groups which are to a large degree mutually unintelligible, and therefore best considered four languages. A primary split can be set up between the Southern variety and the remainder. A number of features are also shared between the Western and Eastern varieties, while certain later sound changes have diffused between Eastern and Northern (and are also found in some neighboring dialects of Northern Khanty to the east).

Individual dialects are known according to the rivers their speakers live(d) on:[3]

Northern Mansi has strong Russian, Komi, Nenets, and Northern Khanty influence, and it forms the base of the literary Mansi language. There is no accusative case; that is, both the nominative and accusative roles are unmarked on the noun. */æ/ and */æː/ have been backed to [a] and [aː].

Eastern Mansi is spoken by 100–200 people. It has Khanty and Tatar influence. There is vowel harmony, and for */æː/ it has [œː], frequently diphthongized.

Southern Mansi was recorded from area isolated from the other Mansi varieties. Around 1900 a couple hundred speakers existed; in the 1960s it was spoken only by a few elderly speakers,[4] and it has since then gone extinct. It had strong Tatar influence and displayed several archaisms such as vowel harmony, retention of /y/ (elsewhere merged with */æ/), /tsʲ/ (elsewhere deaffricated to /sʲ/), /æː/ (elsewhere fronted to /aː/ or diphthongized) and /ɑː/ (elsewhere raised to /oː/).

The inventory presented here is a maximal collection of segments found across the Mansi varieties. Some remarks:

The vowel systems across Mansi show great variety. As typical across the Uralic languages, many more vowel distinctions were possible in the initial, stressed syllable than in unstressed ones. Up to 18–19 stressed vowel contrasts may be found in the Western and Eastern dialects, while Northern Mansi has a much reduced, largely symmetric system of 8 vowels, though lacking short **/e/ and long **/iː/:

The first publication of the written Mansi language was a translation of the Gospel of Matthew published in London in 1868. In 1932 a version of Latin alphabet was introduced with little success. The former Latin alphabet:

In 1937, Cyrillic replaced the Latin.

There are two articles in Mansi: definite ань (aɲ), which also means "now" when placed before verbs, and indefinite акв (akʷ), literally "one".[7]

There is no grammatical gender. Mansi distinguishes between singular, dual and plural number. Six grammatical cases exist. Possession is expressed using possessive suffixes, for example -зм, which means "my".

The language has no future tense; the future is expressed in other ways.

There are four moods: indicative, conditional, imperative and precative.

Indicative mood has no suffix. Imperative mood exists only in the second person.

The suffixes are the following:

Thus, the conjugation of the verb мина (lat. mina [go]), in past tense (remember the suffix -с):

Verbs have active and passive voice. Active voice has no suffix; the suffix to express the passive is -ве-.

Verbal prefixes are used to modify the meaning of the verb in both concrete and abstract ways. For example, with the prefix эл- (el-) (away, off) the verb мина (mina) (go) becomes элмина (elmina), which means to go away. This is surprisingly close to the Hungarian equivalents: el- (away) and menni (to go), where elmenni is to go away

χot – 'direction away from something and other nuances of action intensity'

Here are some invented sentences in Northern Mansi (IPA transcription) and Hungarian. They demonstrate well the relationship between Hungarian and Mansi.