The Maratha Light Infantry (MLI; also the Ganpats) is a regiment of the Indian Army. It was formed as the 103rd Mahrattas in 1768, making it the most senior light infantry regiment of the Army.

The class composition of the regiment was and is primarily formed by hardy, frugal and disciplined Maratha recruits from the former Maratha Empire. The men are mostly drawn from all over the state of Maharashtra, with some percentage from Marathi speaking areas of Karnataka including Coorg.[1] Their regimental centre has been Belgaum, Karnataka, since 1922, which was part of the undivided Bombay state at that time.[2] The battle cry of Maratha Light Infantry is, "Bol Shri Chhatrapati Shivaji Maharaj Ki Jai (Say Victory To King Shivaji)".

The Marathas were a potent force in 16th, 17th, and 18th century India. Their military qualities were brilliantly optimised in their historic campaigns against the Mughals and the English, under the leadership of the Emperor Chatrapati Shivaji Maharaj and succeeding Maratha rulers. Maratha armies, comprising both infantry and light cavalry, with the Maratha naval power had dominated the military scene in India for three centuries. The 1st Battalion of the Regiment, known as Jangi Paltan ("the fighting unit"), was raised in August 1768 as the 2nd Battalion Bombay Sepoys, to protect the British East India Company’s possessions on the islands of Bombay.

The second battalion known as Kali Panchwin followed the next year as the 3rd Battalion Bombay Sepoys. These two battalions were at the forefront of virtually every major engagement fought on the west coast from Surat to Cannanore during the last quarter of the 18th century. Prominent amongst these were the historic battles of Seedaseer and Seringapatam where in the words of Lord Wellesley their conduct and success were seldom equaled and never surpassed.

In the second half of the 19th century, the battalions fought in various campaigns from the Middle East to China. In recognition of the gallant conduct of its detachments at the siege of Kahun and the defence of Dadar, in Baluch territory during the First Anglo-Afghan War in 1841, the Kali Panchwin was created Light Infantry. Later, this honour was also bestowed on the 3rd and 10th Regiments of the Bombay Infantry (present 1st Maratha Light Infantry and 2nd Para respectively) for their gallantry in Sir Robert Napier’s Abyssinian Campaign of 1867-1868. The Regiment assumed the title 5th Mahratta Light Infantry in 1922.

Three Marhatta battalions distinguished themselves during the First World War (1914–1918) in the long drawn-out Mesopotamia campaign. The 117th Marhattas (present 5 Maratha LI) was made into a Royal battalion for its conspicuously distinctive service during its campaign in Mesopotamia, the battalion majorly formed by the gallant Marhatta warriors from Khandesh region of Nasik and particularly in the events leading to enemy capitulation after the bitter 146-day siege at Kut-el-Amara for some unclear reasons even after winning, this regiment did not return. The 114th Marhattas (present Regimental Centre) was awarded 28 gallantry awards for their performance in the battle of Sharquat, the highest earned by any unit in a single action. The other Maratha battalions the 105th Marhatta Light Infantry, 110th Maratha Light Infantry, 116th Marhattas (present 2 Maratha LI, 2 PARA and 4 Maratha LI) also acquitted themselves in Palestine and Mesopotamia.

The Second World War saw the Marathas in the forefront in almost every theatre of operations from the jungles of South East Asia, to the deserts of North Africa, and the mountains and rivers of Italy. The war also saw the expansion of the regiment when thirteen new war service battalions were raised. Most of these were later demobilised after the war, whilst two were converted into artillery regiments. During the war Naik Yeshwant Ghadge and Sepoy Namdeo Jadhav[3] were decorated with the Victoria Cross in the Italian campaign, while 130 other decorations were awarded to the MLI.

Apart from being the first light Infantry of the Indian Army, Kali Panchwin was the first Indian Battalion to participate in World War II, first to have lost its Commanding Officer in action (Colonel Chitty at the Battle of Jebel Hamrin, 1917), the first Maratha Battalion to participate in a Unite Nations mission. Later, it earned the Indian Army's first Ashoka Chakra in the North-East. 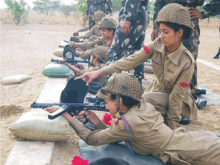 Indian independence saw the Regiment reverting to the original five battalions, with the 3rd Maratha Light Infantry converting to the airborne role and becoming 2nd Bn, the Parachute Regiment in April 1952. With the integration of the erstwhile princely states, the 19th, 20th, 22nd battalions were amalgamated, from the state forces of Satara, Kolhapur, Baroda, and Hyderabad, with the Regiment. The expansion of the Indian Army to meet the omnipresent threat to its borders has seen the Regiment grow to its present 18 battalions and two TA battalions whilst the period also saw the conversion of 21st Bn into 21 Para (Special Forces) and the 115 Infantry battalion (TA) being grouped under the Mahar Regiment.

Since Independence, battalions of the Maratha LI have taken part in every armed conflict — Jammu and Kashmir operations in 1947-1948, entry into Junagarh, Hyderabad Campaign (1948), Invasion of Goa, Daman and Diu, the Sino-Indian War, conflicts with Pakistan in 1965 and 1971 against the Chinese on the Sikkim watershed in 1956, the operations in Sri Lanka, the ongoing operations in the Siachen glacier and in counter insurgency operations.

On the occasion of the 221st Bastille day celebrations, the Maratha Light Infantry led the parade on the Parisian boulevard of Champs-Élysées on 14 July 2009. The military parade was opened with a detachment of 400 soldiers from the three defence services of India, who were attired in ceremonial uniforms. The Indian Prime Minister Manmohan Singh was the guest of honour of the ceremony, an invitee of the French President[4]