This article is about the imperial title of Chhatrapati. For the Telugu film, see Chhatrapati (2005 film).

Chhatrapati (Devanagari: छत्रपती) is an Indian royal title equivalent to an Emperor used by the Marathas. The word ‘Chhatrapati’ is from Sanskrit chhatra (roof or umbrella) and pati (master/owner/ruler); Chhatrapati thus indicates a person who gives shelter to his followers and protects them.

In contrast, the Indian Maharaja or Raja, Yuvraj, Rajkumar or Kumar, Senapati, and Sardar most closely equate to the European titles King, Crown Prince, Prince, Duke, and Count, respectively. Shivaji adopted this title due to the fact that a lot of the other titles were bestowed on rulers by other powers like Adilshahi or Mughals.

Chhatrapti is the title adopted by Shivaji Raje Bhonsle, founder of the Maratha Empire when he got crowned. As described below, Shivaji's lineal successors in the royal House of Bhonsle also held the title of Chhatrapati.

The Royal House of Bhosle 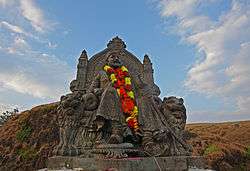 The following list details the Chhatrapatis of the House of Bhosle, a royal family of Maratha Kshatriyas descending from the solar line of the Rajput Ranas of Mewar:[1][2]

The following is the list of the Chhatrapatis of Satara:.[1] Chhatrapatis after 1848 did not have any land under their rule. However, the historically important fort of Pratapgad is owned by Udayanraje Bhosale, the current claimant to the title of Chhatrapati of Satara.

The following is the list of the Chhatrapatis of Kolhapur:[1]