Mass racial violence in the United States, also called race riots, can include such disparate events as:

Riots defined by "race" have taken place between ethnic groups in the United States since as early as the pre-Revolution era of the 18th century. During the early-to-mid- 19th centuries, violent rioting occurred between Protestant "Nativists" and recently arrived Irish Catholic immigrants. These reached heights during the peak of immigration in the 1840s and 1850s in cities including New York, Philadelphia, and Boston. During the early 20th century, riots were common against Irish and French-Canadian immigrants in Providence, Rhode Island.

The San Francisco Vigilance Movements of 1851 and 1856 are often described by sympathetic historians as responses to rampant crime and government corruption. But, recent historians have noted that the vigilantes had a nativist bias; they systematically attacked first Irish immigrants, and later Mexicans, Chileans who came as miners during the California Gold Rush, and Chinese immigrants. During the early 20th century, racial or ethnic violence was directed by whites against Filipinos, Japanese and Armenians in California, who had arrived in waves of immigration.

Like lynchings, race riots often had their roots in economic tensions or in white defense of the color line. 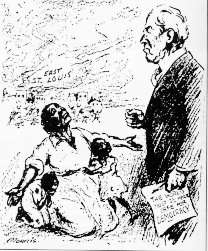 Political cartoon about the East St. Louis massacres of 1917. The caption reads, "Mr. President, why not make America safe for democracy?"

In 1887, for example, ten thousand workers at sugar plantations in Louisiana, organized by the Knights of Labor, went on strike for an increase in their pay to $1.25 a day. Most of the workers were black, but some were white, infuriating Governor Samuel Douglas McEnery, who declared that "God Almighty has himself drawn the color line." The militia was called in, but withdrawn to give free rein to a lynch mob in Thibodaux. The mob killed between 20 and 300 blacks. A black newspaper described the scene:

" 'Six killed and five wounded' is what the daily papers here say, but from an eye witness to the whole transaction we learn that no less than thirty-five Negroes were killed outright. Lame men and blind women shot; children and hoary-headed grandsires ruthlessly swept down! The Negroes offered no resistance; they could not, as the killing was unexpected. Those of them not killed took to the woods, a majority of them finding refuge in this city."[1]

In 1891, a mob lynched Joe Coe, a black worker in Omaha, Nebraska suspected of attacking a young white woman from South Omaha. Approximately 10,000 white people, mostly ethnic immigrants from South Omaha, reportedly swarmed the courthouse and took Coe from his jail cell, beating and then lynching him. Reportedly 6,000 people visited Coe's corpse during a public exhibition at which pieces of the lynching rope were sold as souvenirs. This was a period when even officially sanctioned executions, such as hangings, were regularly conducted in public.[2][3]

Soldiers of 101st Airborne Division safeguard black children on the way to school in Little Rock, during protest actions. 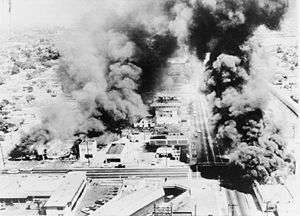 The buildings burning during mutiny in Watts 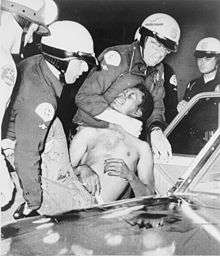 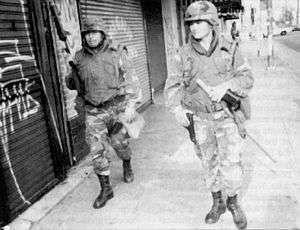 Patrol of National guard after riots in Los Angeles in 1992

Labor and immigrant conflict was a source of tensions that catalyzed into the East St. Louis riot of 1917. White rioters, many of them ethnic immigrants, killed an estimated 100 black residents of East St. Louis, after black residents had killed two white policemen, mistaking the car they were riding in for a previous car of white occupants who drove through a black neighborhood and fired randomly into a crowd of black people .

White-on-Black race riots include the Atlanta riots (1906), the Omaha and Chicago riots (1919), part of a series of riots in the volatile post-World War I environment, and the Tulsa riots (1921).

The Chicago race riot of 1919 grew out of tensions on the Southside, where Irish descendants and African Americans competed for jobs at the stockyards, and where both were crowded into substandard housing. The Irish descendants had been in the city longer, and were organized around athletic and political clubs.

Buildings burning during the Tulsa race riot of 1921

A young black Chicagoan, Eugene Williams, paddled a raft near a Southside Lake Michigan beach into "white territory", and drowned after being hit by a rock thrown by a young white man. Witnesses pointed out the killer to a policeman, who refused to make an arrest. An indignant black mob attacked the officer.[4] Violence broke out across the city. White mobs, many of them organized around Irish athletic clubs, began pulling black people off trolley cars, attacking black businesses, and beating victims with baseball bats and iron bars. Having learned from the East St. Louis riot, the city closed down the street car system, but the rioting continued. A total of 23 black people and 15 white people were killed.[5]

The 1921 Tulsa race riot grew out of economic competition, as the black Greenwood area was compared to Wall Street, and filled with independent businesses. In the immediate event, black people resisted white people who tried to lynch 19-year-old Dick Rowland, who worked at shoeshines. Thirty-nine people (26 black, 13 white) were confirmed killed. An early 21st century investigation of these events has suggested that the number of casualties could be much higher. White mobs set fire to the black Greenwood district, destroying 1,256 homes and as many as 200 businesses. Fires leveled 35 blocks of residential and commercial neighborhood. Black people were rounded up by the Oklahoma National Guard and put into several internment centers, including a baseball stadium. White rioters in airplanes shot at black refugees and dropped improvised kerosene bombs and dynamite on them.[6]

By the 1960s, decades of racial, economic, and political forces, which generated inner city poverty, resulted in "race riots" within minority areas in cities across the United States. The beating and rumored death of cab driver John Smith by police, sparked the 1967 Newark riots. This event became, per capita, one of the deadliest civil disturbances of the 1960s. The long and short term causes of the Newark riots are explored in depth in the documentary film Revolution '67 and many news reports of the times. The riots in Newark spread across the United States in most major cities and over 100 deaths were reported. Many inner city neighborhoods in these cities were destroyed. The assassinations of Rev. Martin Luther King, Jr. in Memphis, Tennessee and later of Robert Kennedy in Los Angeles in 1968 also led to nationwide rioting across the country with similar mass deaths. During the same time period, and since then, violent acts committed against African-American churches and their members have been commonplace.

The 1980s and '90s saw a number of riots tied to longstanding racial tensions between police and minority communities. The 1980 Miami riots occurred following the death of an African-American motorist at the hands of four white Miami-Dade Police officers who were subsequently acquitted on charges of manslaughter and evidence tampering. Similarly, the six-day 1992 Los Angeles riots erupted after the acquittal of four white LAPD officers who had been filmed beating Rodney King, an African-American motorist. Khalil Gibran Muhammad, the Director of the Harlem-based Schomburg Center for Research in Black Culture has identified over 100 instances of mass racial violence in the United States since 1935 and has noted that almost every instance was precipitated by a police incident.[7]

The trend from the late 20th century continued with unrest due to perceived unfair policing of minority communities. The Cincinnati riots of 2001 were caused by the killing of 19-year-old African-American Timothy Thomas by white police officer Stephen Roach, who was subsequently acquitted on charges of negligent homicide.[8] The 2014 Ferguson unrest occurred against a backdrop of racial tension between police and the black community of Ferguson, Missouri in the wake of the shooting of Michael Brown; similar incidents elsewhere such as the shooting of Trayvon Martin sparked smaller and isolated protests. According to the Associated Press' annual poll of United States news directors and editors, the top news story of 2014 was police killings of unarmed black people —including the shooting of Michael Brown—as well as their investigations and the protests in their aftermath.[9][10]

for information about riots worldwide, see List of riots.

Rioting against African Americans results in thousands leaving for Canada.

Irish and German-American indigent immigrants, temporarily interned at Wards Island by the Commissioners of Emigration, begin rioting following an altercation between two residents, resulting in thirty men seriously wounded and around sixty arrested.[11]

Federal troops, led by Col. Kirk and requested by NC governor Holden, were sent to extinguish racial violence. Holden was eventually impeached because of the offensive.

Violence occurs between striking members of a miners' union in Scranton, Pennsylvania when Welsh miners attack Irish and German-American miners who chose to leave the union and accept the terms offered by local mining companies.[12]

In one of the largest civil disturbances in the city's history, fighting between Swedish, Hungarian and Polish immigrants resulted in the shooting death of one man and several others were injured before it was broken up by police.[13]

A lynch mob storms a local jail and hangs 11 Italians following the acquittal of several Sicilian immigrants alleged to be involved in the murder of New Orleans police chief David Hennessy.

10,000 white people storm the local courthouse to beat and lynch Joe Coe, who was alleged to have raped a white child.

Two groups of Irish and Italian-Americans are arrested by police after hurling bricks and shooting each other for a half-hour, resulting from a barroom brawl. After the mob is dispersed by police, five Italians are arrested while two others are sent to a local hospital.[14]

Much of the violence in this national strike was not specifically racial. In Iowa, where employees of Consolidation Coal Company (Iowa) refused to join the strike, armed confrontation between strikers and strike breakers took on racial overtones because the majority of Consolidation's employees were African American. The National Guard was mobilized to avert open warfare.[15][16][17]

Angered about hiring of African-American workers, a group of 80-100 Arab laborers attack African Americans near the Freeman & Hammond brick yard, with numerous men injured on both sides.[18]

Started after a white police officer in Argenta (North Little Rock) killed a black musician, and another black was killed; racial tensions rose with exchange of gunfire, resulting in half a block of buildings burned down; whites rioted and some blacks fled the city.[19]

A successful Greek immigrant community in South Omaha, Nebraska is burnt to the ground by ethnic whites and its residents are forced to leave town.[21]