Kitakyushu (北九州市, Kitakyūshū-shi, "North Kyushu") is one of two designated cities in Fukuoka Prefecture, Japan, together with Fukuoka, with a population of over 1 million people.

Yahata in Kitakyushu was the target for the beginning of the US bombing raids on the home islands on June 16, 1944, when 75 Boeing B-29 Superfortresses flew out from mainland China.[2]

Kokura was the primary target of the nuclear weapon "Fat Man" on August 9, 1945. Major Charles Sweeney had orders to drop the bomb visually, but all three attempts failed due to clouds and smoke from Yahata, which is located only 7 km west of Kokura and had air raids on the previous day, preventing Sweeney from identifying the target clearly. Additionally, a smoke screen was created by industrial workers burning barrels of coal tar, and/or electric plant workers releasing steam.[3][4] The bomb was ultimately dropped on the city of Nagasaki, the secondary target, at 11:02 JST. 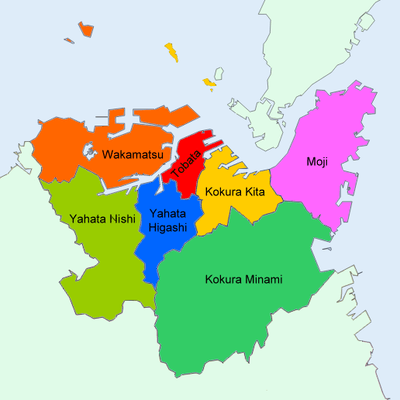 The city of Nakama, Fukuoka was to become the eighth ward of Kitakyushu in 2005 (to be called Nakama-ku). However, the planned merger was rejected on December 24, 2004 by Nakama's city council, despite having been initiated by Nakama City.

The city of Kitakyushu was founded on February 10, 1963 and was designated on April 1, 1963 by government ordinance. The city was born from the merger of five municipalities (Moji, Kokura, Tobata, Yahata and Wakamatsu) centered around the ancient feudal city of Kokura. The city's symbol mark is a flower with the character "north" (北, kita) in the middle and five petals representing the five towns which merged.

The 1986 family movie Koneko Monogatari was filmed here. The English version of the film, which is the story of the friendship of a kitten and a pug dog, was released in America in 1989 as The Adventures of Milo and Otis.

The 1958 comedy Rickshaw Man is based on a local folk hero of Kokura called Muhomatsu or "Wild Pine" and has been called the Japanese Desperado. He is celebrated in the Kokura Gion Yamagasa festival. Toshiro Mifune plays the taiko drum in this movie.

There are several local festivals (matsuri) held in the summer in various parts of the city, including the Tobata Gion Yamagasa festival in Tobata-ku, Kitakyūshū.

It has been designated as an intangible cultural asset of Fukuoka Prefecture. People spin highly decorated “battle floats” as they pull them through the streets.[6]

People carry yamagasa (tiered floats decorated with flags by day and lanterns by night) on their shoulders.

All the Gion festivals date back about 400 years. They were instituted to celebrate having survived an epidemic.[7]

The Wasshoi Hyakuman Natsumatsuri brings all the festivals together for a grand parade and finale near the City Hall in Kokura Kita ward. Kitakyushu was formed by the merging of Kokura, Yahata, Wakamatsu, Moji, and Tobata. As a result, the city began, on its tenth anniversary, to combine these local festivals into one. On the 25th anniversary, it was renamed Wasshoi Hyakuman because the city population had then reached one million.

The Center for Contemporary Art opened in May 1997 and has during the past years shown works of internationally renowned artists e.g. Maurizio Cattelan and Anri Sala. 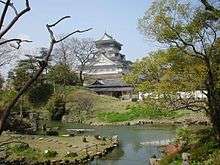 Kokura Castle (小倉城, Kokura-jō) was built by Hosokawa Tadaoki in 1602. It was the property of the Ogasawara clan (from Harima) between 1632 and 1860. The castle was burnt down in 1865 in the war between the Kokura and Choshu clans.

Hiraodai (平尾台, lit. Flat Tail Plateau) karst plateau and Mount Adachi (足立山, Adachi-san) in Kokura Minami ward and Mount Sarakura (皿倉山, Sarakura-san) and Kawachi Dam (河内貯水池, Kawachi-chosuichi) in Yahata Higashi ward are all noted walking areas with fine scenery. The limestone outcroppings on Hiraodai are said to resemble grazing sheep, so the plateau, the highest in Kyushu at 400–600 meters, is also known as the Yogun Plain. Some of the limestone caverns are open to the public.[11] The area also contains the Sugao and Nanae Waterfalls. Sugao is about 20 meters. Nanae literally means Seven Stages Waterfalls.

Space World is an ice rink and amusement park in Kitayusha. In November 2016 the ice rink froze 5,000 fish under the ice. This sparked protests and Space World apologized.[12] 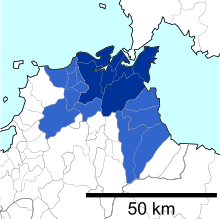 Nippon Steel Corporation is still a major employer but the Yahata and Tobata plants are much reduced from the heyday of the 1960s. The Zenrin company known for its mapping and navigation software is based here, and so is Toto Ltd.[13] and Yaskawa Electric Corporation.[14] StarFlyer, an airline, is headquartered on the grounds of Kitakyushu Airport in Kokuraminami-ku, Kitakyūshū.[15] Previously the airline's headquarters were in the Shin Kokura Building (新小倉ビル, Shin-Kokura Biru) in Kokurakita-ku, Kitakyūshū.[16][17] 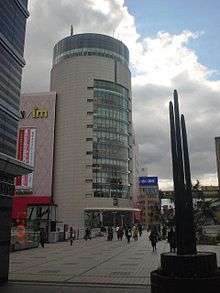 A smaller scale shopping centre called Cha Cha Town has been created by the Nishi-Nippon Railroad and bus company next to the Sunatsu bus depot in Kokura Kita ward. 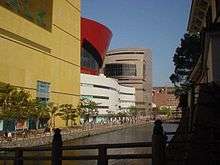 In 2009 Bridgestone Corporation opened a plant in Kitakyushu to produce large and ultralarge off-the-road radial tires for construction and mining vehicles.

Located at a strategic position on the south side of the Kanmon Straits, Kitakyushu is an important transport hub for traffic between Honshu and Kyushu and has a large port.

Kokura Station, the city's central train station, is the penultimate stop on the JR West Sanyō Shinkansen before the Fukuoka terminus and all Shinkansen services stop here. It is also served by local and express trains on JR Kyushu's Kagoshima and Nippō Main Lines. Within the city, transport is provided the Kitakyushu Monorail and buses.

Mojikō Station in Moji-ku is the northern terminus of the Kagoshima Main Line, the most important line in the JR Kyushu network.

A tram network operated by the Nishi-Nippon Railroad known as the Kitakyushu Line once operated within the city, but after dwindling passenger numbers in the 1970s the line was shut down in stages between 1980 and 2000. A railway using tram cars, the Chikuhō Electric Railroad, runs between Kurosaki-Ekimae and Chikuhō-Nōgata stations, serving Yahatanishi-ku and the neighboring city of Nōgata.

The present Kitakyushu Airport opened on March 16, 2006. It is larger than the previous airport and supports 24-hour operations thanks to its location on an artificial island in the Seto Inland Sea. It will eventually be connected with Kokura Station by a new fast rail link. A new airline based in the city called StarFlyer began operations when the airport opened. 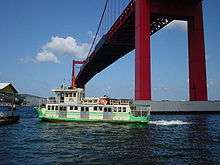 Kitakyushu is the largest ferry port in Kyushu, Chūgoku, and Shikoku. Ferry services operate between Kitakyushu and Shimonoseki, Matsuyama, Tokushima, Kōbe, Ōsaka, Tokyo, Ulsan (Korea), Busan (Korea) and isolated islands within the city limits. The main ferry port is at Shin-Moji, but there are also ferries at Moji and near Kokura Station. 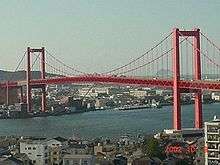 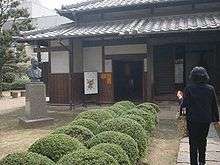 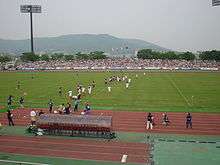 Kitakyushu is twinned with the following five cities outside Japan.[22]

And one city in Japan is twinned with Kitakyushu city.