Michael Anthony Avilés [ah-ve-les'] (born March 13, 1981) is an American professional baseball utility player who is currently a free agent. He previously played in Major League Baseball (MLB) for the Kansas City Royals, Boston Red Sox, Cleveland Indians, and Detroit Tigers. Over the course of his career, Aviles has played every position except for pitcher, catcher, and first base.

Avilés was born in New York City to a Puerto Rican family, and raised in the Castle Hill section of the Bronx. Aviles later moved with his family to Middletown, New York shortly before starting high school,[1] graduating from Middletown High School in 1999.[2] Aviles was a Division II All-American shortstop at Concordia College, in Bronxville, New York, and was named Division II Player of the Year in 2003, after hitting .500 with 83 runs, 22 home runs and 65 runs batted in (RBI) in 45 games.

Aviles was chosen in the seventh round of the 2003 Major League Baseball draft by the Kansas City Royals and offered an "insulting" $1,000 signing bonus.[3] He spent 2004 with the Wilmington Blue Rocks in the Carolina League and 2005 with the Wichita Wranglers in the Texas League. He then spent 2006 and 2007 with the Omaha Royals of the Pacific Coast League, becoming the Royals' Minor League Player of The Year in 2007. He started 2008 in the minors, batting .338 with 10 home runs and 42 RBI in 50 games with Omaha.

Avilés was called up from Triple-A on May 29, 2008, to replace designated hitter Billy Butler on the roster. He finished his rookie season with a .325 batting average in 102 games, with 10 home runs and 51 RBI. If Avilés had recorded a sufficient number of plate appearances to qualify for the American League (AL) batting title, his .325 average would have ranked third among all AL hitters and sixth-best in the major leagues. On November 11, 2008, the Royals named Avilés their 2008 Player of the Year.[4] Avilés finished fourth in the AL Rookie of the Year standings, ending in fourth place behind Evan Longoria, Alexei Ramírez and Jacoby Ellsbury. 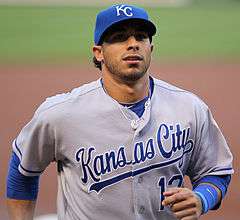 Avilés during his tenure with the Kansas City Royals in 2011

Avilés strained his arm playing with Puerto Rico during the 2009 World Baseball Classic, which necessitated Tommy John surgery in June that ended his 2009 season.[5][6]

Avilés began the 2011 season as the Royals' starting third baseman but was optioned to Omaha when the Royals decided to call up top prospect Mike Moustakas.[7]

On July 30, 2011, the Royals traded Aviles to the Red Sox for shortstop Yamaico Navarro and pitching prospect Kendal Volz.[5] Aviles hit his first home run as a member of the Red Sox on September 16.[8] He hit the ball so hard that it put a hole through the Sports Authority sign on the Green Monster.[9] Avilés became the starting shortstop for the Red Sox in 2012 after Marco Scutaro and Jed Lowrie were traded. On May 19 and 20, 2012, he hit leadoff home runs in back-to-back games. On October 21, 2012, the Red Sox traded Aviles and cash considerations to the Toronto Blue Jays for pitcher David Carpenter and the release of manager John Farrell from the final year of his contract.[10] 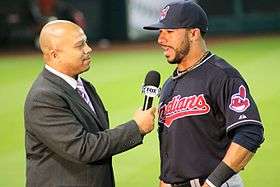 Avilés at Minute Maid Park in 2015

On November 3, 2012, the Blue Jays announced that they had traded Aviles and Yan Gomes to the Cleveland Indians for Esmil Rogers.[11] On February 7, 2013, Aviles avoided arbitration with the Indians, agreeing to a two-year, $6 million deal with a club option for 2015.[12]

On August 16, 2016, the Tigers traded Avilés and Kade Scivicque to the Atlanta Braves in exchange for Erick Aybar.[16] He was designated for assignment the next day.[17] On August 21, 2016, the Braves released Aviles.

Avilés is married to Jessy Poulsen and the couple have twin girls. He also has a daughter with his ex-wife.[18][19] In 2015, his daughter was diagnosed with leukemia.[20]