Miyakonojō (都城市, Miyakonojō-shi) is a city in Miyazaki Prefecture, Japan. The city was founded on April 1, 1924.

Miyakonojō is known as the birthplace of the Shimazu Estate, the largest shōen (estate or manor) of medieval Japan. In the 1020s, a powerful official named Taira no Suemoto developed a small manor named Shimazu-in. Expanded substantially in the first half of the 12th century, it eventually covered large portions of Satsuma, Ōsumi and Hyūga Provinces. In 1185, Koremune no Tadahisa was appointed as jitō of the Shimazu Estate and thereafter claimed the clan name of Shimazu. It is said that one of Tadahisa's residences, called Iwayoshi Gosho, was located at Miyakonojō. Between the Muromachi period and Edo period, the Hōngō family, which was a branch family of the Shimazus, controlled the area. After the Boshin War, it became one of the cities to abolish the han system. In 1871, it became a prefecture for a year.

Many of Miyakonojō's citizens work as farmers. They produce gobō, meat, and bell peppers. Miyakonojō is also home to some agriculture-related manufacturing.

Miyakonojō is also famous for producing traditional Japanese archery bows from the abundant bamboo in the area.[1] 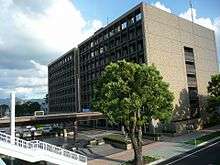 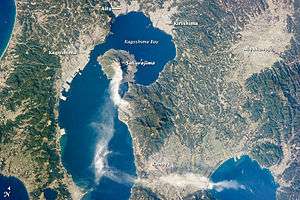 An image taken from the International Space Station showing Miyakonojō and its surroundings on January 10, 2013

Miyakonojō has a humid subtropical climate (Köppen climate classification Cfa), but is cooler than other cities in Miyazaki. The average temperature is about 16 °C, and it rains less than in Miyazaki City. The area's climate is influenced by its proximity to mountains.