This article is about infinite geometric series. For finite sums, see geometric progression. 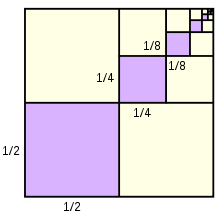 In mathematics, a geometric series is a series with a constant ratio between successive terms. For example, the series

is geometric, because each successive term can be obtained by multiplying the previous term by 1/2.

Geometric series are one of the simplest examples of infinite series with finite sums, although not all of them have this property. Historically, geometric series played an important role in the early development of calculus, and they continue to be central in the study of convergence of series. Geometric series are used throughout mathematics, and they have important applications in physics, engineering, biology, economics, computer science, queueing theory, and finance.

may simply be written as

The behavior of the terms depends on the common ratio r:

The sum of a geometric series is finite as long as the absolute value of the ratio is less than 1; as the numbers near zero, they become insignificantly small, allowing a sum to be calculated despite the series containing infinitely many terms. The sum can be computed using the self-similarity of the series.

A self-similar illustration of the sum s. Removing the largest circle results in a similar figure of 2/3 the original size.

Consider the sum of the following geometric series:

A similar technique can be used to evaluate any self-similar expression.

, the sum of the first n terms of a geometric series is

where a is the first term of the series, and r is the common ratio. We can derive this formula as follows:

As n goes to infinity, the absolute value of r must be less than one for the series to converge. The sum then becomes

When a = 1, this can be simplified to

the left-hand side being a geometric series with common ratio r.

The formula also holds for complex r, with the corresponding restriction, the modulus of r is strictly less than one.

We can prove that the geometric series converges using the sum formula for a geometric progression:

Convergence of geometric series can also be demonstrated by rewriting the series as an equivalent telescoping series. Consider the function,

So S converges to

, the sum of the first n terms of a geometric series is:

This formula can be derived as follows:

A repeating decimal can be thought of as a geometric series whose common ratio is a power of 1/10. For example:

The formula for the sum of a geometric series can be used to convert the decimal to a fraction,

The formula works not only for a single repeating figure, but also for a repeating group of figures. For example:

Note that every series of repeating consecutive decimals can be conveniently simplified with the following:

That is, a repeating decimal with repeat length n is equal to the quotient of the repeating part (as an integer) and 10n - 1.

Archimedes' quadrature of the parabola 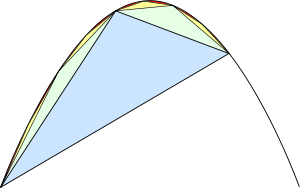 Archimedes' dissection of a parabolic segment into infinitely many triangles
Main article: The Quadrature of the Parabola

Archimedes used the sum of a geometric series to compute the area enclosed by a parabola and a straight line. His method was to dissect the area into an infinite number of triangles.

Archimedes' Theorem states that the total area under the parabola is 4/3 of the area of the blue triangle.

Assuming that the blue triangle has area 1, the total area is an infinite sum:

This computation uses the method of exhaustion, an early version of integration. Using calculus, the same area could be found by a definite integral. 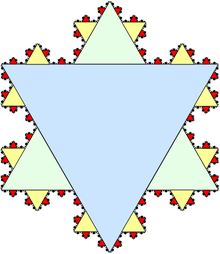 The interior of the Koch snowflake is a union of infinitely many triangles.

In the study of fractals, geometric series often arise as the perimeter, area, or volume of a self-similar figure.

For example, the area inside the Koch snowflake can be described as the union of infinitely many equilateral triangles (see figure). Each side of the green triangle is exactly 1/3 the size of a side of the large blue triangle, and therefore has exactly 1/9 the area. Similarly, each yellow triangle has 1/9 the area of a green triangle, and so forth. Taking the blue triangle as a unit of area, the total area of the snowflake is

Thus the Koch snowflake has 8/5 of the area of the base triangle.

Book IX, Proposition 35[1] of Euclid's Elements expresses the partial sum of a geometric series in terms of members of the series. It is equivalent to the modern formula.

In economics, geometric series are used to represent the present value of an annuity (a sum of money to be paid in regular intervals).

For example, suppose that a payment of $100 will be made to the owner of the annuity once per year (at the end of the year) in perpetuity. Receiving $100 a year from now is worth less than an immediate $100, because one cannot invest the money until one receives it. In particular, the present value of $100 one year in the future is $100 / (1 +

is the yearly interest rate.

)2 (squared because two years' worth of interest is lost by not receiving the money right now). Therefore, the present value of receiving $100 per year in perpetuity is

which is the infinite series:

). The sum is the first term divided by (one minus the common ratio):

For example, if the yearly interest rate is 10% (

This sort of calculation is used to compute the APR of a loan (such as a mortgage loan). It can also be used to estimate the present value of expected stock dividends, or the terminal value of a security.

The formula for a geometric series

can be interpreted as a power series in the Taylor's theorem sense, converging where

. From this, one can extrapolate to obtain other power series. For example,

By differentiating the geometric series, one obtains the variant[2]