The Bank of Japan (日本銀行, Nippon Ginkō, BOJ, JASDAQ: 8301) is the central bank of Japan.[1] The Bank is often called Nichigin (日銀) for short. It has its headquarters in Chūō, Tokyo.[2]

Like most modern Japanese institutions, the Bank of Japan was founded after the Meiji Restoration. Prior to the Restoration, Japan's feudal fiefs all issued their own money, hansatsu, in an array of incompatible denominations, but the New Currency Act of Meiji 4 (1871) did away with these and established the yen as the new decimal currency, which had parity with the Mexican silver dollar.[3] The former han (fiefs) became prefectures and their mints became private chartered banks which, however, initially retained the right to print money. For a time both the central government and these so-called "national" banks issued money. A period of unanticipated consequences was ended when the Bank of Japan was founded in Meiji 15 (October 10, 1882), under the Bank of Japan Act 1882 (June 27, 1882), after a Belgian model. It has since been partly privately owned (its stock is traded over the counter, hence the stock number).[4] A number of modifications based on other national banks were encompassed within the regulations under which the bank was founded.[5] The institution was given a monopoly on controlling the money supply in 1884, but it would be another 20 years before the previously issued notes were retired.[6]

Following the passage of the Convertible Bank Note Regulations (May 1884), the Bank of Japan issued its first banknotes in 1885 (Meiji 18). Despite some small glitches—for example, it turned out that the konjac powder mixed in the paper to prevent counterfeiting made the bills a delicacy for rats—the run was largely successful. In 1897, Japan joined the gold standard,[7] and in 1899 the former "national" banknotes were formally phased out. 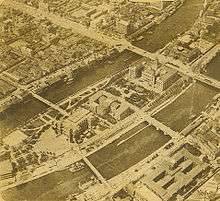 The Osaka branch of the Bank of Japan is seen in the top right of this 1930 aerial photograph. The wide street in front of the bank is part of the Mido-Suji.

Since its Meiji era beginnings, the Bank of Japan has operated continuously from main offices in Tokyo and Osaka.

The Bank of Japan was reorganized in 1942[1] (fully only after May 1, 1942), under the Bank of Japan Act of 1942 (日本銀行法 昭和17年法律第67号), promulgated on February 24, 1942. There was a brief post-war period during the Occupation of Japan when the bank's functions were suspended, and military currency was issued. In 1949, the bank was again restructured.[1]

In the 1970s, the Bank's operating environment evolved along with the transition from a fixed foreign currency exchange rate and a rather closed economy to a large open economy with a variable exchange rate.[8]

During the entire post-war era, until at least 1991, the Bank of Japan's monetary policy has primarily been conducted via its 'window guidance' (窓口指導) credit controls (which are the model for the Chinese central bank's primary tool of monetary policy implementation), whereby the central bank would impose bank credit growth quotas on the commercial banks. The tool was instrumental in the creation of the 'bubble economy' of the 1980s. It was implemented by the Bank of Japan's then 'Business Department' (営業局), which was headed during the 'bubble years' from 1986 to 1989 by Toshihiko Fukui (who became deputy governor in the 1990s and governor in 2003).[9]

A major 1997 revision of the Bank of Japan Act was designed to give it greater independence;[10] however, the Bank of Japan has been criticized for already possessing excessive independence and lacking in accountability before this law was promulgated.[11] A certain degree of dependence might be said to be enshrined in the new Law, article 4 of which states:

However, since the introduction of the new law, the Bank of Japan has rebuffed government requests to stimulate the economy.[12]

Following the election of Prime Minister Shinzō Abe, the Bank of Japan has, with Abe's urging, taken proactive steps to curb deflation in Japan. On October 30, 2012, The Bank of Japan announced that it has undertaken further monetary-easing action for the second time in a month.[13] Under the leadership of new Governor Haruhiko Kuroda, the Bank of Japan released a statement on April 5, 2013 announcing that it would be purchasing securities and bonds at a rate of 60-70 trillion yen a year in an attempt to double Japan's money base in two years.[14] By 2016 it was apparent three years of monetary easing had had little effect on deflation, and the Bank of Japan instigated a review of its monetary stimulus program.[15]

The place of the foundation of the Bank of Japan

According to its charter, the missions of the Bank of Japan are 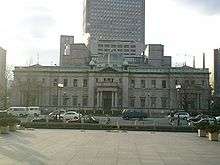 The Bank of Japan Osaka Branch

The Bank of Japan is headquartered in Nihonbashi, Chūō, Tokyo, on the site of a former gold mint (the Kinza) and, not coincidentally, near the famous Ginza district, whose name means "silver mint". The Neo-baroque Bank of Japan building in Tokyo was designed by Tatsuno Kingo in 1896.

The Osaka branch in Nakanoshima is sometimes considered as the structure which effectively symbolizes the bank as an institution.

The Governor of the Bank of Japan (総裁, sōsai) has considerable influence on the economic policy of the Japanese government. Japanese lawmakers endorse the Bank of Japan Governor Haruhiko Kuroda. He is seen to adopt Reflation policy as part of Abenomics.[16]

As of October 2014, the board responsible for setting monetary policy consisted of the following 9 members:

The Bank of Japan Otaru Museum in Otaru, Hokkaido