In economics a monopoly is a firm that lacks any viable competition, and is the sole producer of the industry's product.[1][2][3][4][5] In a normal competitive situation, no firm can charge a price that is significantly higher than the Marginal (Economic) cost of producing (the last unit of) the product.[1][3] If any firm doing business within a competitive situation tries to raise prices significantly higher than the Marginal cost of producing the product, it will lose all of its customers to either other existing firms that charge lower prices, or to a new firm that will find it profitable to use a lower price (closer to its marginal cost) to take customers away from the firm charging the higher price.[1][2][3] But since the monopoly firm does not have to worry about losing customers to competitors, it can set a Monopoly price that is significantly higher than its marginal cost, allowing it to have an economic profit that is significantly higher than the normal profit that is typically found in a perfectly competitive industry.[1][2][3] The high economic profit obtained by a monopoly firm is referred to as monopoly profit.

According to Classical and Neo Classical Economic thought, firms in a perfectly competitive market are price takers because no firm can charge a price that is different from the equilibrium price set within the entire industry's perfectly competitive market.[3][3][4] Since a competitive market has many competing firms, a customer can just easily buy widgets from any of the competing firms.[1][2][3][5] Competing firms in a market thereby face a horizontal demand curve that is fixed at the Market Equilibrium Price.[1][2][5] When many firms produce the same widget within the market, the existence of the mere possibility a firm can lose all of its business if customers simply buy their widgets elsewhere from other firms, makes Deviation from the Market Equilibrium Price impossible.[1]

Perfect competition is commonly characterized by an idealized situation in which all firms within the industry produce exactly comparable goods that are ("Perfect Substitutes").[2][3][5] With the exception of commodity markets, this idealized situation does not typically exist in many actual markets.[2] However, in many cases, there exist products that are "similar" (such as butter and margarine) which are relatively easily interchangeable because they are close Substitutes.[3][5][6] A relatively significant rise in a product's price will tend to cause customers to switch from this good to a lower priced close Substitute.[6][4][7] Some firms that produce different but similar goods may also have relatively similar production processes; making it relatively easy for these firms to switch their manufacturing process to produce the other different but similar good.[3][4][6] This would be the case when the firm's cost of changing their manufacturing process to produce the different but similar good can be relatively "immaterial" in relationship to the firm's overall profit and cost.[6][3][4] When we consider consumers will tend to replace goods whose prices are relatively high for cheaper goods when the two are "Close Substitutes", and firms with similar manufacturing processes can switch over to producing another higher priced good, the Perfect Competition Model will still accurately explain why the existence of different "similar goods" form competitive forces that deny any single firm the ability to establish a monopoly in their product;[8]

This is shown in a high profit and production cost industry such as the car industry and many other Industries facing Competition from Imports.[9]

Competitive firms are forced to be "Price Takers" of the "Equilibrium Price" set within the Industry's Market by Total Consumer Demand and Supply provided by all firms in the Industry.

By contrast, the lack of competition in a market ensures the firm (monopoly) has a downward sloping demand curve[8] Although raising prices causes the monopoly to lose some business, some sales can be made at the higher prices.[1][2] Though monopolists are constrained by consumer demand, they are not "price takers" because they can influence price through their production decisions.[1][2][4][8] The monopolist can either have a target level of output that will ensure the Monopoly Price as the given consumer demand in the industry reacts to the fixed and limited Market Supply, or it can set a fixed Monopoly Price at the onset and adjust output until it can ensure no excess inventories occurs at the final output level chosen.[4][8] A each price, the firm must accept the level of output as determined by the market's consumer demand, and every output quantity is identified with a price that is determined by the market's consumer demand. The price and output are co-determined by consumer demand and the firm's production cost structure.[2]

A firm with monopoly power sets a monopoly price that maximizes the Monopoly profit.[2] The most profitable price for the monopoly occurs when output level ensures the marginal cost (MC) equals the marginal revenue (MR)) associated with the demand curve.[2] Under normal market conditions for a monopolist, this monopoly price will be higher than the Marginal (Economic) cost of producing the product, thereby indicating the price paid by the consumer, which is equal to the marginal benefit for the consumer, is above the firm's marginal cost.[2] In the chart below the shaded area represents the profits of the monopolist, such that MR = MC for the case of monopoly. The lower half represents the normal profits that would go to a competitive firm (ignoring output losses). The upper half represent the additional economic profit going to the monopolist. 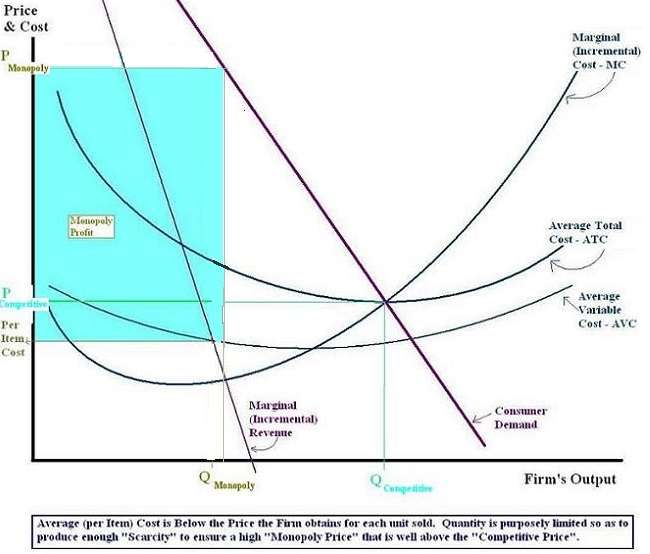 In the absence of barriers to entry and collusion in a market, the existence of a monopoly, and therefore monopoly profit, cannot persist in the long run.[1][4] (Note that a barrier can be caused by increasing returns to scale — a bigger firm can produce more cheaply. If the most efficient size firm serves the whole market, we have a "natural monopoly," and no other firms will "rush" to enter.) Normally, when economic profit exists within an industry, economic agents rush to form new firms in the industry in an effort to obtain at least a portion of the existing economic profit.[1][2] As new firms enter the industry, they increase the supply of the product available in the Market, and these new firms are forced to charge a lower price to entice consumers to buy the additional supply these new firms are supplying (they compete for customers).[1][2][3][4] Since consumers will flock toward the lowest price (in search of a bargain), older firms within the industry actually face losing their existing customers to the new firms entering the industry, and are therefore forced to lower their prices to match the lower prices set by the new firms.[1][2][4][10] New firms will continue to enter the industry until the price of the product is lowered to the point that it is the same as the average economic cost of producing the product, and all of the economic profit disappears.[1][2] When this happens, economic agents outside of the industry find no advantage to entering the industry, supply of the product stops increasing, and the price charged for the product stabilizes.[1][2][3] Essentially, a competitive situation always leads to an equilibrium solution".

When consumers have full information about the prices available in the market and the quality of the products sold by the various firms, there cannot be a persistent monopolistic situation in the absence of barriers to entry and collusion.[1][3][11] Various barriers to entry include patent rights[1][2] and monopolization of a natural resource needed to produce a product.[1][2][3] The American firm Alcoa Aluminum is a historical example of a monopoly due to natural resource control; their control of "practically every source of bauxite in the United States" (bauxite is used to produce aluminum) was one key reason that "Alcoa was, for a long time, the sole producer of aluminum in the United States." [2]

Anti-Trust (Competition) Laws were created to prevent powerful firms from using their economic power to artificially create the "barriers to entry" they need to protect their monopoly profits.[2][3][4][10] This includes the use of predatory pricing toward smaller competitors.[1][4][5] In the United States, Microsoft Corporation was initially convicted of breaking the Anti-Trust Laws and engaging in anti-competitive behavior in order to form one such barrier in United States v. Microsoft; after a successful appeal on technical grounds, Microsoft agreed to a settlement with the Department of Justice in which they were faced with stringent oversight procedures and explicit requirements[12] designed to prevent this predatory behavior.[1][4][5] Microsoft was successfully convicted of similar anti-competitive behavior in the European Economic Community's second highest court, the Luxembourg-based Court of First Instance, in 2007.[13] If firms in an industry collude they can also limit production, thereby restricting supply to ensure the price of the product remains high enough to ensure all of the firms in the industry achieve an economic profit.[1][4][5] 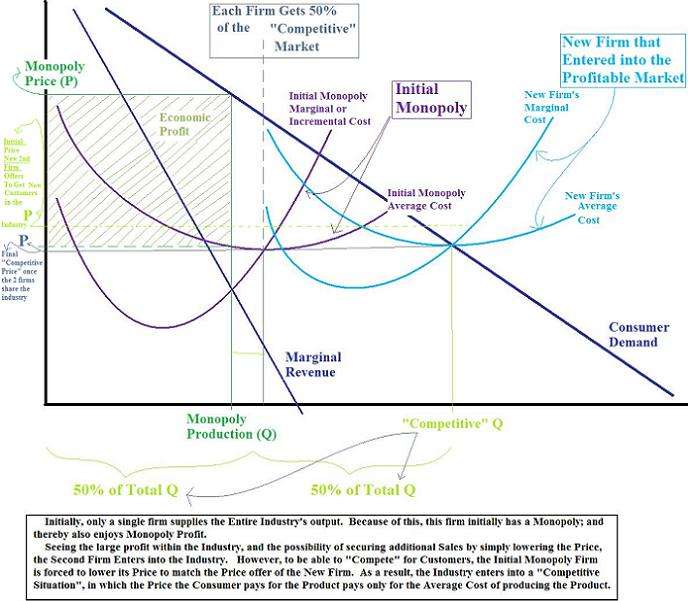 Introducing new Competition in what was previously a monopoly removes monopoly profit. Only 2 Firms are shown here to make Illustration of the additional Competition easier in a Graphical Presentation. In Normal Circumstances, it takes more than 2 firms to form a Competitive Situation, and having only 2 firms forms a "Duopoly (See Oligopoly)"

The diagram to the right depicts an industry that initially starts out with a single firm that enjoys a monopoly and the initial monopoly profit that comes with it. Later, a second firm enters into the industry, lowering its price to obtain customers that usually do not purchase the product at the high Monopoly Price. As the initial monopoly firm loses customers, it is forced to lower its price to retain profitability. In the competition for sales to customers, the firms lower their prices even further, which increases the consumer demand for the product, and thereby entices the firms to raise production and which then increases the industry's total production and sales. Finally, the price and production in the industry stabilizes into its "competitive equilibrium"; the price paid by the consumers are just high enough to cover the average economic cost of producing the product, and the available quantity of the product doubles from its initial sales (under the monopoly).

If a government feels it is impractical to have a competitive market, it will sometimes try to regulate the monopoly by controlling the price the monopoly charges for its product.[2][3] The old AT&T (regulated) monopoly, which existed before the courts ordered its breakup and tried to force competition in the market, had to get government approval to raise its prices.[3] The government examined the monopoly's costs, and determined whether or not the monopoly should be able raise its price and if the government felt that the cost did not justify a higher price, it rejected the monopoly's application for a higher price. Though a regulated monopoly will not have a monopoly profit that is high as it would be in an unregulated situation, it still can have an economic profit that is still well above a competitive firm has in a truly competitive market.[3] 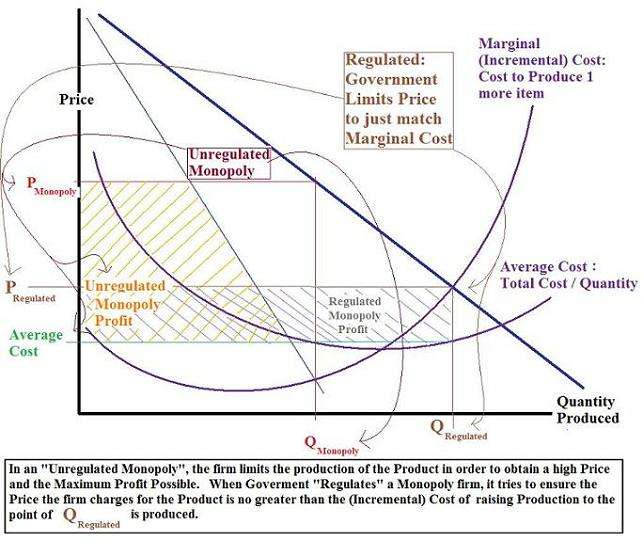 Government regulations of the Price the Monopoly can charge reduces the Monopoly Profit, but does not eliminate it.

The government examines the marginal cost associated with raising the production level up to its presently desirable quantity, and allows the regulated monopoly to charge a price that is no greater than this marginal cost. Though the monopoly's profit is lower than it is in an unregulated Situation, it can still make a positive economic profit.