Mont Ventoux (Ventor in Provençal) is a mountain in the Provence region of southern France, located some 20 km northeast of Carpentras, Vaucluse. On the north side, the mountain borders the Drôme département. At 1,912m, it is the highest mountain in the region and has been nicknamed the "Beast of Provence",[2] the "Giant of Provence",[3][4] or "The Bald Mountain".[4] It has gained fame through its inclusion in the Tour de France cycling race.[4]

As the name might suggest (venteux means windy in French), it can get windy at the summit, especially with the mistral; wind speeds as high as 320 km/h (200 mph) have been recorded. The wind blows at 90+ km/h (56+ mph) 240 days a year. The road over the mountain is often closed due to high winds, especially the "col des tempêtes" ("storm pass") just before the summit, which is known for its strong winds. The real origins of the name are thought to trace back to the 1st or 2nd century AD, when it was named 'Vintur' after a Gaulish god of the summits, or 'Ven-Top', meaning "snowy peak" in the ancient Gallic language. In the 10th century, the names Mons Ventosus and Mons Ventorius appear.

Mont Ventoux, although geologically part of the Alps, is often considered to be separate from them, due to the lack of mountains of a similar height nearby. It stands alone to the north of the Luberon range, separated by the Monts de Vaucluse, and just to the east of the Dentelles de Montmirail, its foothills. The top of the mountain is bare limestone without vegetation or trees, which makes the mountain's barren peak appear from a distance to be snow-capped all year round (its snow cover actually lasts from December to April). Its isolated position overlooking the valley of the Rhône ensures that it dominates the entire region and can be seen from many miles away on a clear day.

Mont Ventoux as seen from Avignon 30 miles away

Mont Ventoux as seen from Roussillon

Whilst the hill was probably climbed in prehistoric times, the first recorded ascent was by Jean Buridan, who on his way to the papal court in Avignon before the year 1334, climbed Mt. Ventoux "in order to make some meteorological observations".[5][6] The Italian poet Petrarch wrote a possibly fictional account of an ascent accompanied by his brother on 26 April 1336, in his Ascent of Mont Ventoux.[7][8] In the 15th century, a chapel was constructed on the top and dedicated to the Holy Cross.

In 1882, a meteorological station was constructed on the summit, though it is no longer in use. This observatory was planned in 1879, along with a carriage road for access.[9] In the 1960s a 50m-high telecommunications mast was built.

From 1902 to 1976 the Mont Ventoux Hill Climb for car and motorcycle took place on the roads of the Mont.

View of Mont Ventoux from Mirabel-aux-Baronnies

Originally forested, Mont Ventoux was systematically stripped of trees from the 12th century onwards to serve the demands of the shipbuilders of the naval port of Toulon. Some areas have been reforested since 1860 with a variety of hardwood trees (such as holm oaks and beeches) as well as coniferous species, such as Atlas cedars and larches. A little higher, junipers are common.

The mountain comprises the species boundary or ecotone between the flora and fauna of northern and southern France. Some species, including various types of spiders and butterflies, are unique to Mont Ventoux. It is a good place to spot the short-toed eagle (Circaetus gallicus).

Its biological distinctiveness was recognised by UNESCO in 1990 when the Réserve de Biosphère du Mont Ventoux was created, protecting an area of 810 square kilometres (200,150 acres) on and around the mountain.

The view from the summit of Mont Ventoux at dawn

For road bicycle racing enthusiasts, the mountain can be climbed by three routes.

Every year there are amateur races to climb the mountain as quickly and often as possible in 24 hours, the Ventoux Masterseries and "Les Cinglés du Mont Ventoux". On 16 May 2006, Jean-Pascal Roux from Bédoin broke the record of climbs in 24 hours, with eleven climbs, all of them from Bédoin.[10] 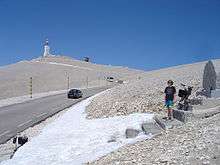 Memorial of Tom Simpson, who died near the summit during the 1967 Tour de France

Mont Ventoux has become legendary as the scene of one of the most grueling climbs in the Tour de France bicycle race, which has ascended the mountain fifteen times since 1951.[11] The followed trail mostly passes through Bédoin. Its fame as a scene of great Tour dramas has made it a magnet for cyclists around the world.

The mountain achieved worldwide notoriety when it claimed the life of British cyclist Tom Simpson, who died here on 13 July 1967 from heat exhaustion caused by a combination of factors, including dehydration (caused by lack of fluid intake and diarrhea), amphetamines, and alcohol, although there is still speculation as to the exact cause of his death.[11] He began to wildly weave across the road before he fell down.[11] He was delirious and asked spectators to put him back on the bike, which he rode to within a half mile of the summit before collapsing dead, still clipped into his pedals. Amphetamines were found in his jersey and bloodstream. There is a memorial to Simpson near the summit, which has become a shrine to fans of cycling,[11] who often leave small tokens of remembrance there. In 1970, Eddy Merckx rode himself to the brink of collapse while winning the stage. He received oxygen, recovered, and won the Tour.[11] In 1994, Eros Poli, not known for his climbing ability, stole away at the beginning of the day's stage, built up a substantial time gap from the peloton, and was first over the Ventoux and eventual stage winner despite losing a minute of his lead per kilometre of the ascent.

In September 2008, it was announced by Claude Haut, the president of the Vaucluse province, that in 2009 the Tour de France would visit Mont Ventoux after a seven-year absence. Unusually, the riders climbed the "Giant of Provence" on the second-to-last day of the race, on 25 July 2009, prior to transferring to Paris for the traditional parade on the Champs-Élysées. It was next featured in the 100th Tour de France in 2013 on Stage 15.

In 2016, the stage to Mont Ventoux was shortened by 6 km (3.7 mi) the day before, after a weather forecast of high winds at the summit. The stage then finished at Chalet Reynard at 1,435 metres (4,708 ft), with approximately 10 kilometres (6.2 mi) of ascent up the mountain.[12] This stage also featured a memorable motorcycle-induced crash which damaged Chris Froome's bike, prompting him to jog some hundred metres up the mountain until he was able to get a neutral service bike (as his team car was too far back at the time), which did not fit him properly.

Note:^ As a result of an investigation into doping in 2012 Lance Armstrong was stripped of his Tour de France titles by the UCI.

Other appearances in Tour de France

The race has also crossed the summit six times.

The climb from Bédoin to the Mont Ventoux

The climb by bike from Bédoin to Mont Ventoux is one of the toughest in professional cycling. Every climb has its own unique particulars. To get a detailed impression of this climb, the route has been measured accurately.

The average gradients per kilometre are as follows:

Mont Ventoux was used as the first checkpoint in the 2015 Transcontinental Race, which is a non-stop, unsupported bicycle race across Europe.

For loaded cycle tourists, the Ventoux presents a particular challenge and each of the three available routes has its advantages and disadvantages. The 'long' route from Sault at 26 km and only just over 1200m of climbing is seen as the easiest. However the long +/- 5% run-in can be draining and is then followed by the same last 5 km steep section as the more traditional TDF route from Bédoin. The route from Bédoin is the least suitable for cycle tourists. The climb for the first 15 km is very narrow and twisty, and cycle tourists climbing at under 5 mph will find themselves battling with traffic in both directions and dodging descending racing cyclists topping 50 mph in the other direction. The last part of this (and the Sault route which follows the same last 5 km) is also very exposed to the elements.

The climb from Malaucène is in theory at least as difficult as the Bédoin route with some very steep sections up to 12%+, but these sections are followed by much easier parts of 2-5% which allow a touring cyclist to rest in a way a racing cyclist would not but very low gearing is essential. In addition the road is wide for most of the climb, well surfaced and with a marked cycling lane at the side and therefore much safer than the Bédoin climb. Lastly for cyclecampers there is a small campsite at around 1400m which can be used to break the climb.[13]

The descent to Bédoin can be hazardous — narrow, bumpy and carrying heavy traffic on weekends, including racing cyclists. Sault is much more gentle after Chalet Reynard, where it leaves the Bédoin route, and extremely pretty. The Malaucène descent has very steep sections, but good surfaces and traffic are not an issue, as the road is wide with good sight-lines and superb views.

There is a small skiing facility on the northern face of Ventoux. High winds and the modest elevation tend to limit the amount of time when this is open to the public.