The 1955 Tour de France saw the introduction of the photo finish.[1]

As was the custom since the 1930 Tour de France, the 1955 Tour de France was contested by national and regional teams. Eight national teams were sent, with 10 cyclists each from France, Belgium, Spain, Great Britain, the Netherlands, Italy, Switzerland, and a mixed team consisting of Luxembourgian, Austrian, German and Australian cyclists. France additionally sent five regional teams from 10 cyclists each, divided into Center-North East France, West France, South East France, Île-de-France and South West France.[1][2] In total, 120 cyclists started the race.[1] The mixed team included cyclists from West-Germany, which was the 1955 Tour was the first since the Second World War that German cyclists rode the Tour.[3] The Great Britain team was the first British team in Tour history.[4]

Louison Bobet, the winner of the 1953 Tour de France and the 1954 Tour de France, had done an aggressive preparation in the early season before the Tour de France, aiming for his third victory.[5] Bobet was the main favourite, also because he was the world champion.[4] 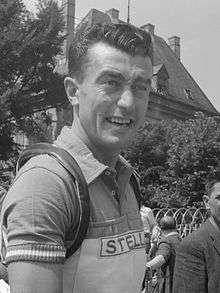 Louison Bobet (pictured in 1951), winner of the general classification

The first part of the first stage was won by Miguel Poblet, who became the first Spanish cyclist to wear the yellow jersey as leader of the general classification.[4] The second and third stage saw small groups escaping from the peloton. In both stages, Wout Wagtmans and Antonin Rolland, one of Bobet's team mates, were present. Wagtmans became leader of the general classification, with Rolland in second place.[4]

The first attack that was important for the general classification was in the fourth stage. Rolland was part of a group of nine cyclist, that finished seven minutes before the rest. Rolland was the best-placed cyclist of those nine, and took the lead.[5]

In the seventh stage, Rolland briefly lost that lead, because a group including Wim van Est escaped and took more than seventeen minutes, which was just enough for Van Est to take over the lead. Van Est was sure to lose it in the next stage, which included high mountains.[4]

In that eighth stage, Charly Gaul attacked early in the stage. Gaul was more than 23 minutes behind in the general classification, but got over the mountains quickly and won with 13 minutes, which put him in third place.[5][8] In the ninth stage, Gaul tried to do the same again, and got over the first three mountains alone. But because of a crash on the second mountain he lost time, and did not win the stage; instead he even lost a few minutes.[4] During the eleventh stage, French cyclist Jean Malléjac collapsed and remained unconscious for 15 minutes. The Tour doctor who helped recognized that Malléjac's symptoms were the same as after taking too much amphetamine, and told the team doctors to be more careful with doping.[9] In that stage, Bobet got away on the Mont Ventoux and nobody was able to follow him. He reached the top alone, and from there descended to the finish, 6 minutes ahead of Rolland, who was still the race leader. Bobet jumped to the second place in the general classification.[5]

The next challenge for the general classification were the Pyrénees mountains. In stage 17, Gaul made the pace, and most cyclists could not follow. Bobet could hold on for a long time, but at the finish lost 84 seconds to Gaul. Because Rolland lost more than seven minutes, Bobet took the lead.[5]

Bobet remained the leader, and his lead was not challenged in the last stage. Bobet became the first person in the Tour de France to win three Tours in a row.[5]

The points classification was calculated in the same way as in 1954, following the calculation method from the Tours de France from 1905 to 1912. Points were given according to the ranking of the stage: the winner received one points, the next cyclist two points, and so on. These points were added, and the cyclist with the least points was the leader of the points classification. In 1955, this was won by Stan Ockers.[1]

In every stage, a jury gave points for the most combative cyclist. These votes were added in the combativity classification. At the end of the Tour de France, Charly Gaul won the classification.[3]