For the Renaissance composer of the same name, see Carpentras (composer).

Carpentras (French pronunciation: ​[kaʁpɑ̃tʁa]; Provençal Occitan: Carpentràs in classical norm or Carpentras in Mistralian norm) is a commune in the Vaucluse department in the Provence-Alpes-Côte d'Azur region in southeastern France.

It stands on the banks of the Auzon. As capital of the Comtat Venaissin, it was frequently the residence of the Avignon popes; the Papal States retained possession of the Venaissin until the French Revolution. Nowadays, Carpentras is a commercial center for Comtat Venaissin and is famous for the black truffle markets held from winter to early spring.

Carpentras was a commercial site used by Greek merchants in ancient times, and known to Romans at first as Carpentoracte Meminorum, mentioned by Pliny, then renamed Forum Neronis ("Forum of Nero"); the city retains an impressive Roman triumphal arch, that has been enclosed by the bishops' palace, rebuilt in 1640, now a law court, and a machicolated city gate, the Porte d'Orange.

At the beginning of the Avignon Papacy, Pope Clement V took up residence, along with the Roman Curia, in Carpentras in 1313. It was his successor Pope John XXII who settled definitively at Avignon.

Joseph-Dominique d'Inguimbert, Bishop of Carpentras from 1735 to 1754, established a great scholarly library which Jean-François Delmas, the current chief librarian, has called "the oldest of our municipal libraries"; known as the Bibliothèque Inguimbertine and now holding around 140,000 books, it is known to bibliophiles all over France and is scheduled to move into roomier quarters in the former Hôtel-Dieu in 2013.[1]

Carpentras has been an important centre of French Judaism, and is home to the oldest synagogue in France (1367), which still holds services. In May 1990, the Jewish cemetery was desecrated (see French and European Nationalist Party).[2]

For the Renaissance composer of the same name, see Carpentras (composer).

In the Köppen climate classification, Carpentras has a humid subtropical climate (Cfa),[3] with cold winters and hot summers. The rainiest seasons are spring (April–May) and autumn (September–October), where heavy downpours may happen. 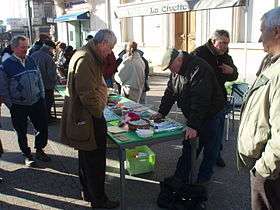 Carpentras is famous for the Truffle market that takes place every Friday morning during the winter months.[6]

Its traditional confectionery is the berlingot, a small hard candy with thin white stripes, originally made from the syrup left over from conservation of fruits.

Carpentras was the birthplace of:

Carpentras is twinned with: