Felice Gimondi (Italian pronunciation: [feˈliːtʃe dʒiˈmondi]; born 29 September 1942) is an Italian former professional racing cyclist. With his 1968 victory at the Vuelta a España, only three years after becoming a professional cyclist, Gimondi, nicknamed "The Phoenix", was the second cyclist (after Jacques Anquetil) to win all three Grand Tours of road cycling: Tour de France (1965, his first year as a pro), Giro d'Italia (1967, 1969 and 1976), and Vuelta a España (1968).[1] He remains one of only six cyclists to have done so.[2] 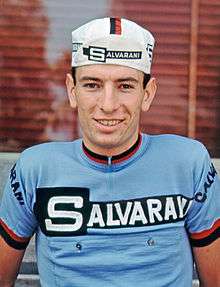 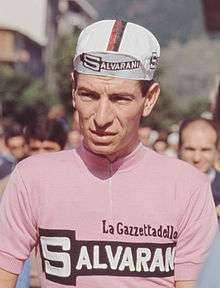 Gimondi grew up cycling with his mother, a postal carrier who rode a bicycle to make her deliveries. In 1964 Gimondi rode the road race at the 1964 Olympic Games, where he finished in 33rd place.[3] After winning the amateur version of the Tour de France (Tour de l'Avenir), he was signed, in 1965, as a professional to the Salvarani team. With the withdrawal of another cyclist from Salvarani's Tour de France team, Gimondi was added at the last minute and went on to win the tour, becoming an Italian national hero.

In 1966, he won two of the 'Monument' Classics: Paris–Roubaix and the Giro di Lombardia. Gimondi also won the UCI World Championshipss in 1973, after placing second in 1971 and third in 1970.

In the Giro d'Italia, Gimondi holds the record for the most podium finishes: nine total, consisting of three first place wins, two second-place finishes and four third-place finishes. He is currently associated with the Bianchi bicycle manufacturer.

A major cyclosportive event is named in his honour, the Gran Fondo Felice Gimondi, held annually around Bergamo. Likewise Bianchi have named one of their high level framesets after him the "FG Lite".