The dirham (Arabic: درهم‎‎), plural: (Arabic: دراهم‎‎), is the currency of Morocco. The plural form is pronounced darahim, although in French and English "dirhams" is commonly used. Its ISO 4217 code is "MAD". It is subdivided into 100 santimat (singular: santim, Arabic singular: سنتيم, plural: سنتيما or سنتيمات). The dirham is issued by the Bank Al-Maghrib, the central bank of Morocco. 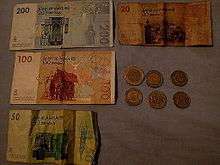 When most of Morocco became a French protectorate in 1912 it switched to the Moroccan franc. The dirham was reintroduced on 16 October 1960.[1] It replaced the franc as the major unit of currency but, until 1974, the franc continued to circulate, with 1 dirham = 100 francs. In 1974, the santim replaced the franc.[2]

In December 2012, Bank-Al Maghrib issued a 25-dirham banknote to commemorate the 25th anniversary of banknote production at the Moroccan State Printing Works, Dar As-Sikkah. It is the first banknote in the world to be printed on Durasafe, a paper-polymer-paper composite substrate produced by Fortress Paper. The front of the commemorative note features an intaglio vignette and a watermark of King Mohammed VI, and a magenta-green color shift security thread. The thread, like the watermark, is embedded inside the banknote yet visible behind a one-sided Viewsafe polymer window. It also has a fully transparent polymer window embossed with the King's royal crest. The back of the note carries a print vignette commemorating 25 years of banknote printing at the Moroccan State Printing Works, Dar As-Sikkah. The windows in Durasafe are formed by die cutting each side of the three layer composite substrate separately. One-sided Viewsafe windows give a clear view inside the substrate where the thread and the watermark of King Mohammed VI are protected, but fully visible behind the polymer core. The transparent Thrusafe window is created by die-cutting both the outer paperlayers to reveal only the transparent polymer core.[6]

On August 15, 2013, Bank Al-Maghrib has announced a new series of banknotes. The notes feature a portrait of King Mohammed VI and the royal crown. Each of the notes show a Moroccan door to the left of the portrait, demonstrating the richness of the country's architectural heritage, and symbolizing the openness of the country.[7][8][9][10]

Popular denominations are words widely used in Morocco to refer to different values of the currency; they are not considered official by the state, though. Those include the rial (Arabic pronunciation: [rjal]), equivalent to 5 santimat, and the franc [frˤɑnk], equivalent to 1 santim. Usually, when dealing with goods with a value lower than a dirham, it is common to use the rial or santim. For very high priced goods, such as cars, it is normative to refer to the price in santimat. However, rial is used when speaking in Arabic and centime when speaking in French. Though not used by the young generation, the denomination 1000, 2000, ... to 100,000 francs will be used by people who lived during the French colonial period when referring to 10, 20 and 1000 dirham. Likewise, rial is also used for higher value than portions of the dirham, reaching 5000 dhs (100,000 rial). This denomination is used in Moroccan Arabic speaking context, especially in popular milieu such as old medina souks or vegetable markets. 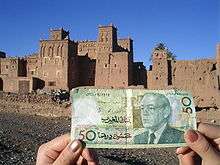 50 dirhams and Ksour in the background