The Djiboutian franc (Arabic: فرنك‎‎) is the currency of Djibouti. Its ISO 4217 currency code is DJF. Historically, it was subdivided into 100 centimes.

From 1908, francs circulating in Djibouti were legally fixed at the value of the French franc. Starting in 1910, banknotes were issued for the then colony by the Bank of Indochina. Chamber of Commerce paper money and tokens were issued between 1919 and 1922.

In 1948, the first coins were issued specifically for use in Djibouti, in the name of the "Côte Française des Somalis". In 1949, an independent Djiboutian franc came into being when the local currency was pegged to the US dollar at a rate of 214.392 francs = 1 dollar. This was the value which the French franc had had under the Bretton Woods system until a few months before. Consequently, the Djiboutian economy was not affected by the further devaluations of the French franc.

In 1952, the Public Treasury took over the production of paper money. French Somaliland's change of name in 1967 to the French Territory of the Afars and the Issas was reflected on both the territory's coins and notes. In 1971 and 1973, the franc was revalued against the US dollar, first to a rate of 197.466 to the dollar, then 177.721, a rate which has been maintained ever since. A further change in coin and banknote design followed independence in 1977.

Between 1920 and 1922, the Chamber of Commerce issued tokens struck in zinc, aluminium, bronze and aluminium-bronze in denominations of 5, 10, 25 and 50 centimes and 1 franc. Shapes included round, hexagonal and octagonal.

From 2013, new coins of 250 francs were put in circulation to complement the other denominations. 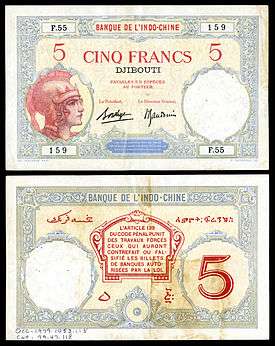 Note: Rates obtained from these websites may contradict with pegged rate mentioned above