Molecular biology /məˈlɛkjʊlər/ concerns the molecular basis of biological activity between biomolecules in the various systems of a cell, including the interactions between DNA, RNA, and proteins and their biosynthesis, as well as the regulation of these interactions.[1][2] Writing in Nature in 1961, William Astbury described molecular biology as:

"...not so much a technique as an approach, an approach from the viewpoint of the so-called basic sciences with the leading idea of searching below the large-scale manifestations of classical biology for the corresponding molecular plan. It is concerned particularly with the forms of biological molecules and [...] is predominantly three-dimensional and structural—which does not mean, however, that it is merely a refinement of morphology. It must at the same time inquire into genesis and function."[3]

Relationship to other biological sciences 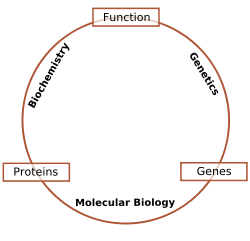 Researchers in molecular biology use specific techniques native to molecular biology but increasingly combine these with techniques and ideas from genetics and biochemistry. There is not a defined line between these disciplines. The figure to the right is a schematic that depicts one possible view of the relationships between the fields:

Much of molecular biology is quantitative, and recently much work has been done at its interface with computer science in bioinformatics and computational biology. In the early 2000s, the study of gene structure and function, molecular genetics, has been among the most prominent sub-fields of molecular biology. Increasingly many other areas of biology focus on molecules, either directly studying interactions in their own right such as in cell biology and developmental biology, or indirectly, where molecular techniques are used to infer historical attributes of populations or species, as in fields in evolutionary biology such as population genetics and phylogenetics. There is also a long tradition of studying biomolecules "from the ground up" in biophysics.

Since the late 1950s and early 1960s, molecular biologists have learned to characterize, isolate, and manipulate the molecular components of cells and organisms.

One of the most basic techniques of molecular biology to study protein function is molecular cloning. In this technique, DNA coding for a protein of interest is cloned (using PCR and/or restriction enzymes) into a plasmid (known as an expression vector). A vector has 3 distinctive features: an origin of replication, a multiple cloning site (MCS), and a selective marker (usually antibiotic resistance). The origin of replication will have promoter regions upstream from the replication/transcription start site.

This plasmid can be inserted into either bacterial or animal cells. Introducing DNA into bacterial cells can be done by transformation (via uptake of naked DNA), conjugation (via cell-cell contact) or by transduction (via viral vector). Introducing DNA into eukaryotic cells, such as animal cells, by physical or chemical means is called transfection. Several different transfection techniques are available, such as calcium phosphate transfection, electroporation, microinjection and liposome transfection. DNA can also be introduced into eukaryotic cells using viruses or bacteria as carriers, the latter is sometimes called bactofection and in particular uses Agrobacterium tumefaciens. The plasmid may be integrated into the genome, resulting in a stable transfection, or may remain independent of the genome, called transient transfection.

Polymerase chain reaction is an extremely versatile technique for copying DNA. In brief, PCR allows a specific DNA sequence to be copied or modified in predetermined ways. The reaction is extremely powerful and under perfect conditions could amplify 1 DNA molecule to become 1.07 Billion molecules in less than 2 hours. The PCR technique can be used to introduce restriction enzyme sites to ends of DNA molecules, or to mutate (change) particular bases of DNA, the latter is a method referred to as site-directed mutagenesis. PCR can also be used to determine whether a particular DNA fragment is found in a cDNA library. PCR has many variations, like reverse transcription PCR (RT-PCR) for amplification of RNA, and, more recently, quantitative PCR which allow for quantitative measurement of DNA or RNA molecules. 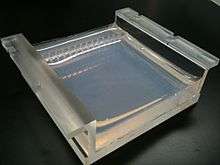 The terms northern, western and eastern blotting are derived from what initially was a molecular biology joke that played on the term Southern blotting, after the technique described by Edwin Southern for the hybridisation of blotted DNA. Patricia Thomas, developer of the RNA blot which then became known as the northern blot, actually didn't use the term.[4] Further combinations of these techniques produced such terms as southwesterns (protein-DNA hybridizations), northwesterns (to detect protein-RNA interactions) and farwesterns (protein-protein interactions), all of which are presently found in the literature.

Named after its inventor, biologist Edwin Southern, the Southern blot is a method for probing for the presence of a specific DNA sequence within a DNA sample. DNA samples before or after restriction enzyme (restriction endonuclease) digestion are separated by gel electrophoresis and then transferred to a membrane by blotting via capillary action. The membrane is then exposed to a labeled DNA probe that has a complement base sequence to the sequence on the DNA of interest. Most original protocols used radioactive labels; however, non-radioactive alternatives are now available. Southern blotting is less commonly used in laboratory science due to the capacity of other techniques, such as PCR, to detect specific DNA sequences from DNA samples. These blots are still used for some applications, however, such as measuring transgene copy number in transgenic mice or in the engineering of gene knockout embryonic stem cell lines. 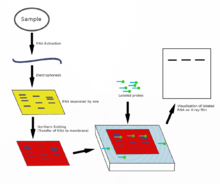 The northern blot is used to study the expression patterns of a specific type of RNA molecule as relative comparison among a set of different samples of RNA. It is essentially a combination of denaturing RNA gel electrophoresis, and a blot. In this process RNA is separated based on size and is then transferred to a membrane that is then probed with a labeled complement of a sequence of interest. The results may be visualized through a variety of ways depending on the label used; however, most result in the revelation of bands representing the sizes of the RNA detected in sample. The intensity of these bands is related to the amount of the target RNA in the samples analyzed. The procedure is commonly used to study when and how much gene expression is occurring by measuring how much of that RNA is present in different samples. It is one of the most basic tools for determining at what time, and under what conditions, certain genes are expressed in living tissues.

Antibodies to most proteins can be created by injecting small amounts of the protein into an animal such as a mouse, rabbit, sheep, or donkey (polyclonal antibodies) or produced in cell culture (monoclonal antibodies). These antibodies can be used for a variety of analytical and preparative techniques.

In western blotting, proteins are first separated by size, in a thin gel sandwiched between two glass plates in a technique known as SDS-PAGE (sodium dodecyl sulfate polyacrylamide gel electrophoresis). The proteins in the gel are then transferred to a polyvinylidene fluoride (PVDF), nitrocellulose, nylon, or other support membrane. This membrane can then be probed with solutions of antibodies. Antibodies that specifically bind to the protein of interest can then be visualized by a variety of techniques, including colored products, chemiluminescence, or autoradiography. Often, the antibodies are labeled with enzymes. When a chemiluminescent substrate is exposed to the enzyme it allows detection. Using western blotting techniques allows not only detection but also quantitative analysis. Analogous methods to western blotting can be used to directly stain specific proteins in live cells or tissue sections. However, these immunostaining methods, such as FISH, are used more often in cell biology research.

The Eastern blotting technique is used to detect post-translational modification of proteins.[5] Proteins blotted on to the PVDF or nitrocellulose membrane are probed for modifications using specific substrates.

A DNA microarray is a collection of spots attached to a solid support such as a microscope slide where each spot contains one or more single-stranded DNA oligonucleotide fragment. Arrays make it possible to put down large quantities of very small (100 micrometre diameter) spots on a single slide. Each spot has a DNA fragment molecule that is complementary to a single DNA sequence (similar to Southern blotting). A variation of this technique allows the gene expression of an organism at a particular stage in development to be qualified (expression profiling). In this technique the RNA in a tissue is isolated and converted to labeled cDNA. This cDNA is then hybridized to the fragments on the array and visualization of the hybridization can be done. Since multiple arrays can be made with exactly the same position of fragments they are particularly useful for comparing the gene expression of two different tissues, such as a healthy and cancerous tissue. Also, one can measure what genes are expressed and how that expression changes with time or with other factors. For instance, the common baker's yeast, Saccharomyces cerevisiae, contains about 7000 genes; with a microarray, one can measure qualitatively how each gene is expressed, and how that expression changes, for example, with a change in temperature. There are many different ways to fabricate microarrays; the most common are silicon chips, microscope slides with spots of ~ 100 micrometre diameter, custom arrays, and arrays with larger spots on porous membranes (macroarrays). There can be anywhere from 100 spots to more than 10,000 on a given array. Arrays can also be made with molecules other than DNA. For example, an antibody array can be used to determine what proteins or bacteria are present in a blood sample.

Allele-specific oligonucleotide (ASO) is a technique that allows detection of single base mutations without the need for PCR or gel electrophoresis. Short (20-25 nucleotides in length), labeled probes are exposed to the non-fragmented target DNA. Hybridization occurs with high specificity due to the short length of the probes and even a single base change will hinder hybridization. The target DNA is then washed and the labeled probes that didn't hybridize are removed. The target DNA is then analyzed for the presence of the probe via radioactivity or fluorescence. In this experiment, as in most molecular biology techniques, a control must be used to ensure successful experimentation. The Illumina Methylation Assay is an example of a method that takes advantage of the ASO technique to measure one base pair differences in sequence.

In molecular biology, procedures and technologies are continually being developed and older technologies abandoned. For example, before the advent of DNA gel electrophoresis (agarose or polyacrylamide), the size of DNA molecules was typically determined by rate sedimentation in sucrose gradients, a slow and labor-intensive technique requiring expensive instrumentation; prior to sucrose gradients, viscometry was used. Aside from their historical interest, it is often worth knowing about older technology, as it is occasionally useful to solve another new problem for which the newer technique is inappropriate.

While molecular biology was established in the 1930s, the term was coined by Warren Weaver in 1938. Weaver was the director of Natural Sciences for the Rockefeller Foundation at the time and believed that biology was about to undergo a period of significant change given recent advances in fields such as X-ray crystallography. He therefore channeled significant amounts of (Rockefeller Institute) money into biological fields.

Clinical research and medical therapies arising from molecular biology are partly covered under gene therapy . The use of molecular biology or molecular cell biology approaches in medicine is now called molecular medicine. Molecular biology also plays important role in understanding formations, actions, and regulations of various parts of cells which can be used to efficiently target new drugs, diagnosis disease, and understand the physiology of the cell.