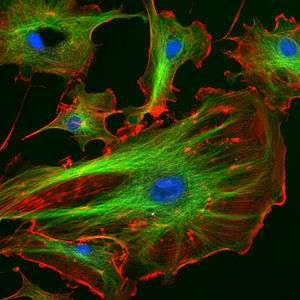 The eukaryotic cytoskeleton. Actin filaments are shown in red, and microtubules composed of beta tubulin are in green.

A cytoskeleton is present in all cells of all domains of life (archaea, bacteria, eukaryotes). It is a complex network of interlinking filaments and tubules that extend throughout the cytoplasm, from the nucleus to the plasma membrane[1] The cytoskeletal systems of different organisms are composed of similar proteins. In eukaryotes, the cytoskeletal matrix is a dynamic structure composed of three main proteins, which are capable of rapid growth or disassembly dependent on the cell's requirements at a certain period of time.[2]

There is a multitude of functions that the cytoskeleton can perform. Primarily, it gives the cell shape and mechanical resistance to deformation,[3] and through association with extracellular connective tissue and other cells it stabilizes entire tissues.[3][6] The cytoskeleton can also actively contract, thereby deforming the cell and the cell's environment and allowing cells to migrate.[5] Moreover, it is involved in many cell signaling pathways, in the uptake of extracellular material (endocytosis),[7] segregates chromosomes during cellular division,[3] is involved in cytokinesis (the division of a mother cell into two daughter cells),[4] provides a scaffold to organize the contents of the cell in space [5] and for intracellular transport (for example, the movement of vesicles and organelles within the cell);[3] and can be a template for the construction of a cell wall.[3] Furthermore, it forms specialized structures, such as flagella, cilia, lamellipodia and podosomes.

A large-scale example of an action performed by the cytoskeleton is muscle contraction. During contraction of a muscle, within each muscle cell, myosin molecular motors collectively exert forces on parallel actin filaments. This action contracts the muscle cell, and through the synchronous process in many muscle cells, the entire muscle.

In 1903, Nikolai K. Koltsov proposed that the shape of cells was determined by a network of tubules that he termed the cytoskeleton. The concept of a protein mosaic that dynamically coordinated cytoplasmic biochemistry was proposed by Rudolph Peters in 1929 [8] while the term (cytosquelette, in French) was first introduced by French embryologist Paul Wintrebert in 1931.[9] 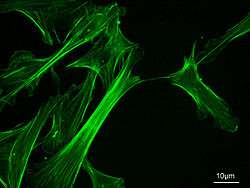 Eukaryotic cells contain three main kinds of cytoskeletal filaments: microfilaments, microtubules, and intermediate filaments. Each cytoskeletal filament has a shape and intracellular distribution. Additionally, the filaments are formed by polymerization of different types of sub-units. The microfilament consist of the polymers of the protein actin which has a diameter of 7 nm. The microtubules are made up of the protein called tubulin which has a diameter of 25 nm. Intermediate filaments are made up of various proteins which varies depending on the cell type. These type of filament normally have diameters ranging from 8-12 nm.[1] The cytoskeleton provides the cell with structure and shape, and by excluding macromolecules from some of the cytosol, it adds to the level of macromolecular crowding in this compartment.[10] Cytoskeletal elements interact extensively and intimately with cellular membranes.[11] A number of small molecule cytoskeletal drugs have been discovered that interact with actin and microtubules. These compounds have proven useful in studying the cytoskeleton and several have clinical applications.

Microfilaments are composed of linear polymers of G-actin proteins, and generate force when the growing (plus) end of the filament pushes against a barrier, such as the cell membrane. They also act as tracks for the movement of myosin molecules that attach to the microfilament and "walk" along them. Myosin motoring along F-actin filaments generates contractile forces in so-called actomyosin fibers, both in muscle as well as most non-muscle cell types.[13] Actin structures are controlled by the Rho family of small GTP-binding proteins such as Rho itself for contractile acto-myosin filaments ("stress fibers"), Rac for lamellipodia and Cdc42 for filopodia. 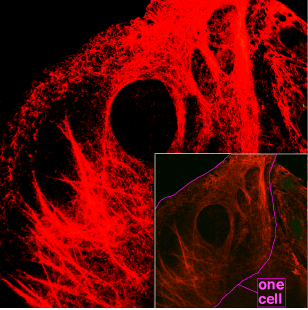 Intermediate filaments are a part of the cytoskeleton of all animals. These filaments, averaging 10 nanometers in diameter, are more stable (strongly bound) than actin filaments, and heterogeneous constituents of the cytoskeleton. Like actin filaments, they function in the maintenance of cell-shape by bearing tension (microtubules, by contrast, resist compression but can also bear tension during mitosis and during the positioning of the centrosome). Intermediate filaments organize the internal tridimensional structure of the cell, anchoring organelles and serving as structural components of the nuclear lamina. They also participate in some cell-cell and cell-matrix junctions. Nuclear lamina exist in all animals and all tissues. Some animals like the fruit fly do not have any cytoplasmic intermediate filaments. In those animals that express cytoplasmic intermediate filaments, these are tissue specific.[6] 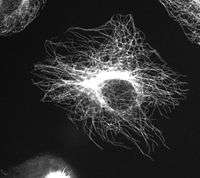 Microtubules are hollow cylinders about 23 nm in diameter (lumen = approximately 15 nm in diameter), most commonly comprising 13 protofilaments that, in turn, are polymers of alpha and beta tubulin. They have a very dynamic behavior, binding GTP for polymerization. They are commonly organized by the centrosome.

In nine triplet sets (star-shaped), they form the centrioles, and in nine doublets oriented about two additional microtubules (wheel-shaped), they form cilia and flagella. The latter formation is commonly referred to as a "9+2" arrangement, wherein each doublet is connected to another by the protein dynein. As both flagella and cilia are structural components of the cell, and are maintained by microtubules, they can be considered part of the cytoskeleton.

They play key roles in:

Septins are a group of the highly conserved GTP binding proteins found in eukaryotes. Different septins form protein complexes with each other. These can assemble to filaments and rings. Therefore, septins can be considered part of the cytoskeleton.[18] The function of septins in cells include serving as a localized attachment site for other proteins, and preventing the diffusion of certain molecules from one cell compartment to another.[18] In yeast cells, they build scaffolding to provide structural support during cell division and compartmentalize parts of the cell. Recent research in human cells suggests that septins build cages around bacterial pathogens, immobilizing the harmful microbes and preventing them from invading other cells.[19]

In budding yeast (an important model organism), actin forms cortical patches, actin cables, and a cytokinetic ring and the cap. Cortical patches are discrete actin bodies on the membrane and are important for endocytosis, especially the recycling of glucan synthase which is important for cell wall synthesis. Actin cables are bundles of actin filaments and are involved in the transport of vesicles towards the cap (which contains a number of different proteins to polarize cell growth) and in the positioning of mitochondria. The cytokinetic ring forms and constricts around the site of cell division.[21]

The cytoskeleton was once thought to be a feature only of eukaryotic cells, but homologues to all the major proteins of the eukaryotic cytoskeleton have been found in prokaryotes.[22] Although the evolutionary relationships are so distant that they are not obvious from protein sequence comparisons alone, the similarity of their three-dimensional structures and similar functions in maintaining cell shape and polarity provides strong evidence that the eukaryotic and prokaryotic cytoskeletons are truly homologous.[23] However, some structures in the bacterial cytoskeleton may not have been identified as of yet.[13][24]

FtsZ was the first protein of the prokaryotic cytoskeleton to be identified. Like tubulin, FtsZ forms filaments in the presence of guanosine triphosphate (GTP), but these filaments do not group into tubules. During cell division, FtsZ is the first protein to move to the division site, and is essential for recruiting other proteins that synthesize the new cell wall between the dividing cells.

Some plasmids encode a partitioning system that involves an actin-like protein ParM. Filaments of ParM exhibit dynamic instability, and may partition plasmid DNA into the dividing daughter cells by a mechanism analogous to that used by microtubules during eukaryotic mitosis.[13][26]

The bacterium Caulobacter crescentus contains a third protein, crescentin, that is related to the intermediate filaments of eukaryotic cells. Crescentin is also involved in maintaining cell shape, such as helical and vibrioid forms of bacteria, but the mechanism by which it does this is currently unclear.[27]

Common features and differences between prokaryotes and eukaryotes

By definition, the cytoskeleton is composed of proteins that can form longitudinal arrays (fibres) in all organisms. These filament forming proteins have been classified into 4 classes. Tubulin-like, actin-like, Walker A cytoskeletal ATPases (WACA-proteins), and intermediate filaments.[4][13]