Mouscron (French: [mukʁɔ̃]; Dutch: Moeskroen, pronounced [muˈskrun], Picard: Moucron) is a Walloon city and municipality located in the Belgian province of Hainaut, along the border with the French city of Tourcoing, which is part of the Lille metropolitan area. The Mouscron municipality includes the old communes of Dottignies (Dottenijs), Luingne, and Herseaux (Herzeeuw). Mouscron is a municipality with language facilities for Dutch-speakers. Kortrijk, in Flanders, is located just north of Mouscron. 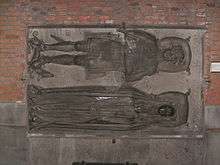 A few archaeological discoveries were made in this area proving the existence of settlements during Roman times. The name Dottignies – a village that is now part of Mouscron – appeared for the first time in the 9th century, while that of Mouscron itself appeared only in 1060. In 1066, Baldwin V, Count of Flanders ceded the local buildings and territories to the estate of the church of Saint-Pierre in Lille. In 1149 the right to collect tithes in the Mouscron area was ceded partly to the abbey of Saint Martin in Tournai, partly to the chapter of the Tournai Cathedral. The rights to the neighbouring villages of Herseaux and Luingnes – now also part of Mouscron – were also given to the Tournai cathedral in 1178. In the 14th century, the seigneury of Mouscron was eventually sold to a Tournai lord, and in 1430, the local castle became the lord’s manor, or Château des Comtes, which can still be seen today. The future Charles V, Holy Roman Emperor stopped there for dinner on May 27, 1516.

In 1575, in the middle of the Wars of Religion, the castle was strengthened. It was nevertheless besieged and taken by the Geuzen, locally known as the Hurlus in 1579, before being taken back three months later. In 1627, Philip IV of Spain promoted the seigneury to the rank of county. The Franco-Dutch War under Louis XIV devastated for this mostly agricultural region. Mouscron and the surrounding area became French after the Treaty of Aix-la-Chapelle (1668). Part of it rejoined the Southern Netherlands after the Treaty of Nijmegen (1678), which drew the frontier right through its territory. It was finally completely ceded to the Southern Netherlands under the terms of the Treaty of Utrecht in 1713. The textile industry started in Mouscron in the 1760s thanks to the imposition by Lille of a ban on the fabrication of molletons, a mixture of flax and wool, in Roubaix and Tourcoing. The Battle of Fleurus (1794) gave Mouscron back to France.

At the beginning of the 19th century, the textile industry flourished and added cotton as one of its prime materials. On March 29, 1848, the Belgian army needed to intervene near Mouscron against a troop of French republican sympathizers who were ready to invade Belgium, in what was known as the Risquons-Tout incident. By the end of the century several cotton mills and carpet plants were built, leading the village to expand into a much larger urban area, especially after the close of World War I. In 1963, Mouscron was transferred from the province of West Flanders, to the province of Hainaut, to reflect the predominantly francophone population. Mouscron was officially recognized as a city in 1986.