For other uses, see Vale of Glamorgan (disambiguation).

The Vale of Glamorgan, often referred to as The Vale, (Welsh: Bro Morgannwg [ˈbroː mɔrˈɡanʊɡ]) is a county borough in Wales. With an economy based largely on agriculture and chemicals, it is the southernmost unitary authority in Wales. Attractions include Barry Island Pleasure Park (known for the BBC sitcom, Gavin & Stacey), the Barry Tourist Railway, Porthkerry Park, St Donat's Castle, Cosmeston Lakes Country Park and Cosmeston Medieval Village. It is also the location of Atlantic College, one of the United World Colleges.

The largest town is Barry. Other towns include Penarth, Llantwit Major and Cowbridge. There are many villages in the county borough.

In medieval times, the village of Cosmeston, near what is today Penarth in the south east of the county, grew up around a fortified manor house constructed sometime around the 12th century by the De Costentin family.[1] The De Costentins, who originated on the Cotentin peninsular in northern France,[2] were among the first Norman invaders of Wales in the early 12th century following William the Conqueror's invasion of neighbouring England in 1066. The village would have consisted of a number of small stone round houses, or crofts, with thatched roofs.[3]

Clemenstone, to the west, was the seat of several high sheriffs of Glamorganshire, including John Curre who was known have occupied the estate in 1712. William Curre, known to have lived in Clemenstone in 1766, was also an occupant of Itton Court in Monmouthshire.[4] In the early 19th century, Lady Sale née Wynch, wife of Sir Robert Sale, spent much of her early life on the Clemenstone Estate.[5]

In 1974, the area became part of South Glamorgan, under the Local Government Act 1972. It created several problems in local governance, between the South Glamorgan County Council, Cardiff City Council and the Vale of Glamorgan Borough Council owing to their conflicting interests. It was a turbulent time for governance in the city of Cardiff, as for the first time in its history it had to share authority with the county council, which was larger and better resourced.[6] In April 1996, the Vale of Glamorgan became a county borough (unitary authority) of Wales, after forming part of South Glamorgan county.[7] 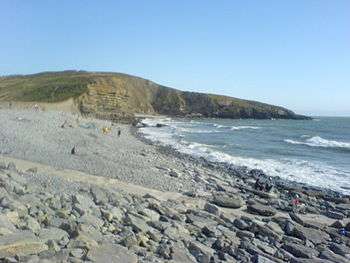 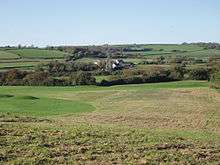 Looking across the Vale of Glamorgan on Brynhill Golf Course, outskirts of Barry

The yellow-grey cliffs on the Glamorgan Heritage Coast (which stretches between Gileston and Ogmore-by-Sea) are unique on the Celtic Sea coastline (i.e. Cornwall, Wales, Ireland and Brittany) as they are formed of a combination of liassic limestone, shale and carboniferous sandstone/limestone. They were formed 200 million years ago when the whole area lay underneath a warm, shallow, equatorial sea at the start of the Jurassic Era. Thus today the cliffs contain traces of Jurassic sea creatures, such as ammonites. The stratification of overlapping shale, sandstone and limestone was caused by a geological upheaval known as the Variscan orogeny, which pushed the cliffs out of the sea, contorting them as they did so. This stratification can also be found on other parts of the Celtic seaboard, such as Bude in Cornwall, across the Bristol Channel. The calcium carbonate (limestone) in the soil allows crops to be grown which would be difficult elsewhere in Wales or the West Country: most of the West Country has poor quality and mainly acidic Devonian soils). The liassic limestone and carboniferous sandstone are also used in the Vale as building materials; in previous centuries it was taken by sloops across the Bristol Channel to North Cornish ports such as Bude, Boscastle and Port Isaac to fertilise Cornwall's poor slate soils; the hard Devonian slate was brought back from Cornwall as a roofing material for houses in the Vale.

As the Glamorgan Heritage Coast faces westwards out to the Atlantic, it bears the brunt of onshore (westerly and south-westerly) winds: ideal for surfing, but a nuisance for ships sailing up the Bristol Channel to Cardiff. As in North Cornwall and South-West Ireland, the fierce Atlantic gales created ideal conditions for deliberate shipwrecking, which until 100 years ago was very common along the coast (although shipwrecking was common across all the Celtic Sea). Nash Point, Southerndown and Ogmore-by-Sea have some of the highest shipwreck victims on the coast of Wales; as recently as 1962 an oil tanker, the BP Driver, crashed into Nash Point during a violent westerly storm, was torn to shreds by the reefs and eventually sank, although the crew were saved by various Bristol Channel lifeboats and helicopters.

The Vale of Glamorgan was determined to be the wealthiest area in Wales in a 2003 survey conducted by Barclays Bank that measured disposable income.[10] Chemical industries are located to the east of the port of Barry[11] while further inland the main activity is agriculture, especially beef and dairy cattle, with marketing facilities at Cowbridge.[12]

The Vale of Glamorgan parliamentary and assembly constituencies (which do not include Penarth and Sully which are in the constituency of Cardiff South and Penarth) sway between Labour control and Conservative Party control in both the National Assembly for Wales and Westminster. There is substantial Labour support in the east of the constituency and in the town of Barry, and substantial Conservative support in the agricultural area in the west. Since May 2012, the Labour Party leads a coalition in the County Borough council with the Llantwit First independent group.

The principal football club in the Vale is Barry Town United F.C., which play their home games at Jenner Park Stadium in Barry. The club was founded in 1912 and enjoyed success in the 1990s, when they won the Welsh Premier League and the Welsh Cup. The club experienced declining fortunes in the following decade and were relegated to Welsh Football League Division Two, but were promoted to Division One after winning the league in the 2014-15 season. In 2014 it was announced that Jenner Park stadium would undergo a £350,000 plus development with the laying of a synthetic pitch.[13] There are several other smaller football clubs in the county such as Llantwit Major F.C., established in 1962,[14] which competes in the Welsh Football League Division Three,[15] and Penarth Town AFC.[16]

Rugby has a strong presence in the county, though none of its clubs compete in the higher leagues. As of the 2015-6 season, Penarth RFC competes in the WRU Division Three South East, Llantwit Major RFC in WRU Division Four South East, and Old Penarthians RFC and Cowbridge RFC in the WRU Division Five South East. Several of the clubs are feeders for Cardiff Blues.[17] There are cricket grounds in Cowbridge and Sully and several golf clubs, including the Glamorganshire, Southerndown and Wenvoe Castle clubs. 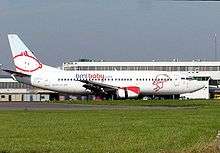 The county is served by the M4 Motorway junctions 33 (Cardiff West) and 34 (Llantrisant). The A48 trunk road traverses the Vale of Glamorgan, linking it to Cardiff and Bridgend.

The Vale of Glamorgan Line, which is part of the Cardiff and Valleys network, runs trains between Bridgend, Barry Island and Penarth and Aberdare railway station, Merthyr Tydfil and Cardiff Central Station. Services are operated by Arriva Trains Wales.

New Adventure Travel runs buses through the Vale to places such as Llantwit Major and Barry with service 303 from Bridgend to Barry. Service 304 is a continuation of route 303 and serves Dinas Powys and Cogan; it terminates in Cardiff. NAT also runs a rail-bus service which links Rhoose to Cardiff Airport. Cardiff Bus runs various services from Llantwit Major and Barry to Cardiff, such as route X91 from Llantwit Major and route 95 from Barry. First Cymru operates the X2 from Porthcawl to Cardiff via Bridgend and Cowbridge. Due to financial pressures some rural bus operators have withdrawn services, such as the village bus network with buses from Cowbridge to Llantwit Major, Barry and Bridgend via rural villages like Colwinston and Fonmon. TrawsCymru have an express bus service T9 from Cardiff Airport to Cardiff.

Cardiff International Airport, the only international airport in Wales, is located in Rhoose in the south of the county borough.

The Vale of Glamorgan is twinned with:

and has friendship agreements with: