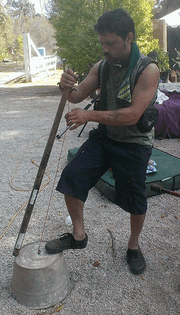 A small washtub bass being played

The washtub bass, or gutbucket, is a stringed instrument used in American folk music that uses a metal washtub as a resonator. Although it is possible for a washtub bass to have four or more strings and tuning pegs, traditional washtub basses have a single string whose pitch is adjusted by pushing or pulling on a staff or stick to change the tension.

The washtub bass was used in jug bands that were popular in some African American communities in the early 1900s. In the 1950s, British skiffle bands used a variant called a tea chest bass, and during the 1960s, US folk musicians used the washtub bass in jug band-influenced music.

Variations on the basic design are found around the world, particularly in the choice of resonator. As a result, there are many different names for the instrument including the "gas-tank bass", "barrel bass", "box bass" (Trinidad), "bush bass" (Australia), "babatoni" (South Africa), "tingotalango" (Cuba), "tulòn" (Italy), "laundrophone" and others.

The hallmarks of the traditional design are simplicity, very low cost and do-it-yourself construction, leading to its historical association with lower economic classes. These factors also make it quite common for modern-day builders to promote modifications to the basic design, such as adding a finger board, pedal, electronic pickup, drumhead, or making the staff immovable.

Electric "inbindi" bass which is amplified by a public address system

Ethnomusicologists trace the origins of the instrument to the 'ground harp' - a version that uses a piece of bark or an animal skin stretched over a pit as a resonator. The ang-bindi made by the Baka people of the Congo is but one example of this instrument found among tribal societies in Africa and Southeast Asia, and it lends its name to the generic term inbindi for all related instruments. Evolution of design, including the use of more portable resonators, has led to many variations, such as the dan bau (Vietnam) and gopichand (India), and more recently, the "electric one-string", which amplifies the sound using a pickup.

The washtub bass is sometimes used in a jug band, often accompanied by a washboard as a percussion instrument. Jug bands, first known as "spasm bands", were popular especially among African-Americans around 1900 in New Orleans and reached a height of popularity between 1925 and 1935 in Memphis and Louisville.

At about the same time, European-Americans of Appalachia were using the instrument in "old-timey" folk music. A musical style known as "gut-bucket blues" came out of the jug band scene, and was cited by Sam Phillips of Sun Records as the type of music he was seeking when he first recorded Elvis Presley.

According to Willie "The Lion" Smith's autobiography, the term "gutbucket" comes from "Negro families" who all owned their own pail, or bucket, and would get it filled with the makings for chitterlings. The term "gutbucket" came from playing a lowdown style of music.[1]

In English skiffle bands, Australian and New Zealand bush bands and South African kwela bands, the same sort of bass has a tea chest as a resonator. Before the Beatles, John Lennon and Paul McCartney's band, The Quarrymen, featured a tea-chest bass, as did many young bands around 1956. 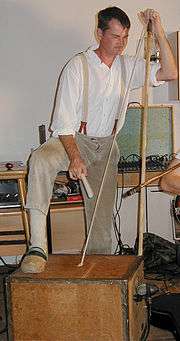 A tea chest bass is a variation of the washtub bass that uses a tea chest as the resonator for an upright stringed bass. The instrument is made from a pole, traditionally a broomstick, placed into or alongside the chest. One or more strings are stretched along the pole and plucked.

In Europe, particularly England and Germany, the instrument is associated with skiffle bands. In Australia it was traditionally used to provide deep sounds for "bush bands", though most such groups today use electric bass or double bass. It was commonly called a "bush bass".

Other variations on the basic design are found around the world, particularly in the choice of resonator, for example: