In music, a drone is a harmonic or monophonic effect or accompaniment where a note or chord is continuously sounded throughout most or all of a piece. The word drone is also used to refer to any part of a musical instrument that is just used to produce such an effect, as is the archaic term burden (bourdon or burdon)[1][2] such as a "drone [pipe] of a bagpipe,"[3][4] the pedal point in an organ, or the lowest course of a lute. Burden also refers to a part of a song that is repeated at the end of each stanza, such as the chorus or refrain.[5]

The term comes from the French bourdon, a staff; or a pipe made in the form of a staff. "The drone does not take its name from the bee. It is a far older word," sharing an Indo-European root ("dhran, to drone, to hum") with the Sanskrit "dhran", the Greek "thren-os", and the English "thrum", "drum", and "dream".[5]

"Of all harmonic devices, it [a drone] is not only the simplest, but probably also the most fertile."[6]

A drone effect can be achieved through a sustained sound or through repetition of a note. It most often establishes a tonality upon which the rest of the piece is built. A drone can be instrumental, vocal or both. Drone (both instrumental and vocal) can be placed in different ranges of the polyphonic texture: in the lowest part, in the highest part, or in the middle. The drone is most often placed upon the tonic or dominant (play "Row, Row, Row Your Boat" with a drone on the

changing chords .). A drone on the same pitch as a melodic note tends to both hide that note and to bring attention to it by increasing its importance.

A drone differs from a pedal tone or point in degree or quality. A pedal point may be a form of nonchord tone and thus required to resolve unlike a drone, or a pedal point may simply be considered a shorter drone, a drone being a longer pedal point.

The systematic use of drones originated in instrumental music of ancient Southwest Asia, and spread north and west to Europe, east to India, and south to Africa.[7] It is a key component of much Australian aboriginal music through the didgeridoo. It is used in Indian music and is played with the tanpura (or tambura) and other Indian drone instruments like the ottu, the ektar, the dotara (or dotar; dutar in Persian Central Asia), the surpeti, the surmandal (or swarmandal) and the shank (conch shell). Most of the types of bagpipes that exist worldwide have up to three drones, making this one of the first instruments that comes to mind when speaking of drone music. In America, most forms of the African-influenced banjo contain a drone string. Since the 1960s, the drone has become a prominent feature in drone music and other forms of avant-garde music.

In vocal music drone is particularly widespread in traditional musical cultures, particularly in Europe, Polynesia and Melanesia. "Drones are not uncommon in primitive music, but neither are they characteristic of it."[8] It is also present in some isolated regions of Asia (like among Pearl-divers in the Persian Gulf, some national minorities of South-West China, Taiwan, Vietnam, and Afghanistan).[9]

Part(s) of a musical instrument 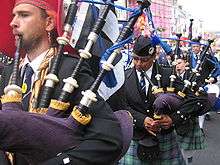 Highland bagpipes, with drone pipes over the pipers' left shoulders

Drone is also the term for the part of a musical instrument intended to produce the drone effect's sustained pitch, generally without the ongoing attention of the player. Different melodic Indian instruments (e.g. the sitar, the sarod, the sarangi and the rudra veena) contain a drone. For example, the sitar features three or four resonating drone strings, and Indian notes (sargam) are practiced to a drone. Bagpipes (like the Great Highland Bagpipe and the Zampogna) feature a number of drone pipes, giving the instruments their characteristic sounds. A hurdy-gurdy has one or more drone strings. The fifth string on a five-string banjo is a drone string with a separate tuning peg that places the end of the string five frets down the neck of the instrument; this string is usually tuned to the same note as that which the first string produces when played at the fifth fret, and the drone string is seldom fretted. The bass strings of the Slovenian drone zither also freely resonate as a drone. The Welsh Crwth also features two drone strings.

Use in musical compositions

Composers of Western classical music occasionally used a drone (especially one on open fifths) to evoke a rustic or archaic atmosphere, perhaps echoing that of Scottish or other early or folk music. Examples include the following:

However, drones are less often used in common practice classical music, because equal temperament causes slight mistunings, which become more apparent over a drone, especially when also sustained. On the other hand, drones may be purposely dissonant, as often found in the music of Phill Niblock. The best-known drone piece in the concert repertory is the Prelude to Wagner's Das Rheingold (1854) wherein the bass instruments sustain an E♭ throughout the entire movement.[11] Later drone pieces include Loren Rush's Hard Music (1970) [12] and Folke Rabe's Was?? (1968),[13] as well as Robert Erickson's Down at Piraeus.[14]

Contemporary folk music uses the drone effect extensively. In much of Bob Dylan's early work he uses this effect with a retuned guitar, for instance "Masters of War" and "Mr. Tambourine Man". The song "You Will Be My Ain True Love", written by Sting for the 2003 movie Cold Mountain and performed by Alison Krauss and Sting, uses drone bass.

Contemporary classical musicians who make prominent use of drones, often with just or other non-equal tempered tunings, include La Monte Young and many of his students, David First, the band Coil, the early experimental compilations of John Cale (Sun Blindness Music, Dream Interpretation, and Stainless Gamelan), Pauline Oliveros and Stuart Dempster, Alvin Lucier (Music On A Long Thin Wire), Ellen Fullman, Lawrence Chandler and Arnold Dreyblatt. The music of Italian composer Giacinto Scelsi is essentially drone-based. Shorter drones or the general concept of a continuous element are often used by many other composers. Other composers whose music is entirely based on drones include Charlemagne Palestine and Phill Niblock. Also the avant-garde guitarist Glenn Branca uses drones extensively.

Drones are used widely in the blues, as well as by Jerry Lee Lewis, especially during solos and fills.[15] Drones were virtually absent in original rock and roll music, but gained popularity after the Beatles used drones in a few popular compositions (for example, "Blackbird" has a drone in the middle of a texture throughout the whole song, "Tomorrow Never Knows" makes use of tambura). They also used high drone for the dramatic effect in some sections of several of their compositions (like the last verses of "Yesterday" and "Eleanor Rigby"). The rock band U2 uses drones in their compositions particularly widely. In the Led Zeppelin song "In The Light", a keyboard drone is used throughout the song, mostly in the intro.

Use for musical training

Drones are used by a number of music education programs for ear training and pitch awareness, as well as a way to improvise ensemble music.[16] A shruti box is often used by vocalists in this style of musical training.

As an alternative to a music theory approach to interval analysis, multiple drones can be used in exercises that take a humanistic or experiential approach to musical intervals.[17]

This article incorporates text from a publication now in the public domain: Chambers, Ephraim, ed. (1728). "Burden". Cyclopædia, or an Universal Dictionary of Arts and Sciences (first ed.). James and John Knapton, et al.