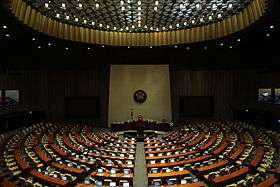 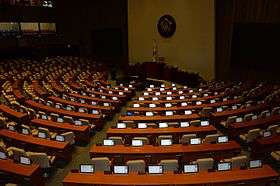 The National Assembly of the Republic of Korea, often shortened to the National Assembly in domestic English-language media, is the 300-member[3] unicameral national legislature of South Korea. The latest legislative elections were held on 13 April 2016. Single-member constituencies comprise 253 of the assembly's seats, while the remaining 47 are allocated by proportional representation. Members serve four-year terms.

The unicameral assembly consists of at least 200 members according to the South Korean constitution. In 1990 the assembly had 299 seats, 224 of which were directly elected from single-member districts in the general elections of April 1988. Under applicable laws, the remaining seventy-five representatives were elected from party lists. By law, candidates for election to the assembly must be at least thirty years of age. As part of a political compromise in 1987, an earlier requirement that candidates have at least five years' continuous residency in the country was dropped to allow Kim Dae-Jung, who had spent several years in exile in Japan and the United States during the 1980s, to return to political life. The National Assembly's term is four years. In a change from the more authoritarian Fourth Republic and Fifth Republic (1972–80 and 1980–87, respectively), under the Sixth Republic, the assembly cannot be dissolved by the president.

Parties that hold at least 20 seats in the assembly form floor negotiation groups (Korean: 교섭단체, RR: gyoseop danche), which are entitled to a variety of rights that are denied to smaller parties. These include a greater amount of state funding and participation in the leaders' summits that determine the assembly's legislative agenda.[6]

To introduce a bill, a legislator must present the initiative to the Speaker with the signatures of at least ten other members of the assembly. The bill must then be edited by a committee to ensure that the bill contains correct and systematic language. It can then be approved or rejected by the Assembly.[7]

There are 16 standing committees which examine bills and petitions falling under their respective jurisdictions, and perform other duties as prescribed by relevant laws.

Since the promulgation of the March 1988 electoral law, the assembly has been elected every four years through a Supplementary Member system, meaning that some of the members are elected from constituencies according to the system of first past the post, while others are elected at a national level through proportional representation.[8] As of 2012, 246 members represent constituencies, while 54 were elected from PR lists. In contrast to elections to the Assembly, presidential elections occur once every five years, and this has led to frequent situations of minority government and legislative deadlock.[9]

A proposal to lower the number of seats required to form a negotiation group to 15 was passed on 24 July 2000, but was overturned by the Constitutional Court later that month.[10] In order to meet the quorum, the United Liberal Democrats, who then held 17 seats, arranged to "rent" three legislators from the Millennium Democratic Party. The legislators returned to the MDP after the collapse of the ULD–MDP coalition in September 2001.[11]

From 2004 to 2009, the assembly gained notoriety as a frequent site for legislative violence.[12] The Assembly first came to the world's attention during a violent dispute on impeachment proceedings for then President Roh Moo-hyun,[13][14] when open physical combat took place in the assembly. Since then, it has been interrupted by periodic conflagrations, piquing the world's curiosity once again in 2009 when members battled each other with sledgehammers and fire extinguishers.[15][16][17][18] Images of the melee were broadcast around the world.

Elections for the assembly were held under UN supervision[19] on 10 May 1948. The First Republic of South Korea was established on 17 July 1948[20] when the constitution of the First Republic was established by the Assembly. The Assembly also had the job of electing the President, and elected anti-communist Syngman Rhee as President on 10 May 1948.

Since the reopen of the National Assembly in 1963 until today, it has been unicameral.