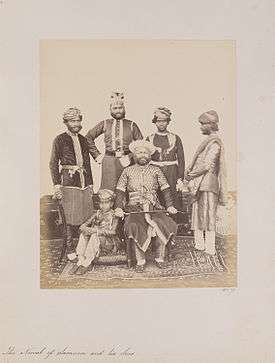 Savanur State[1] was one of the princely states of British India. It was the only state belonging to the Dharwar Agency under the Bombay Presidency, which became later part of the Deccan States Agency. The last ruler of the state acceded to the Dominion of India on 8 March 1948.

Savanur State covered an area of 189 square kilometers and had a population of 18,446 in 1901. Its capital was Savanur.

Savanur was one of the former states of the Southern Maratha Country. Following the Independence of India it became part of Mysore State and is currently in Karnataka State.

Savanur State was founded in 1672 when Abdul Karim Khan, an Afghan of the Miyana tribe from Kabul,[2] in the service of the sultanat of Bijapur, was granted the jagir of Sarkar Bankapur near Bijapur in 1672.[3] His successors ruled over extensive territories almost independently for over a century. However, Savanur was conquered and made a tributary by the Marathas, which gradually eroded away Savanur’s territory. By the second half of the eighteenth century, more than half of Savanur had been ceded to the Marathas. By the end of the century, Tipu Sultan had annexed the remainder. The occupation by the Kingdom of Mysore (Mahisur) had begun on 29 October 1786 and lasted until 17 December 1791. Later all the territories were returned by Mysore to the Marathas, following the Battle of Gajendragad.

The name Savanur is said to be the corruption of the Persian word Shahnoor, which means 'king of light'. Few others claim that the city was established in the Hindu month of Shravan, and hence the name Savanur.[4]

With the death of Tipu Sultan in 1799, independence returned to Savanur with about a third of its original territory. Thereafter, Savanur slowly drifted towards British suzerainty. After the collapse of the Maratha Empire in 1818, following the Third Anglo-Maratha War, Savanur accepted protection from British East India Company and became a British protectorate.[5]

The final ruling Nawab of Savanur, Abdul Majid Khan II, succeeded as a minor at the age of two years, and had been carefully raised and educated by his British overseers. He traveled widely and mixed with people in all walks of life in India and abroad. He returned to assume power determined to modernize his state, engaging in a furious program of building modern schools, dispensaries, government offices, courts, palaces, jails, irrigation tanks, and roads. In the short period of thirty-five years of his active rule, this little state advanced beyond anything achieved in the previous three centuries. The advent of Indian independence in 1947 and the withdrawal of the British caused the Nawab great sadness. Once the transfer formalities were completed, he retired to his private mansion at Dharwad, never setting foot in Savanur again. After his death in 1954, local authorities, out of sincere respect for a distinguished gentleman held in high regard almost universally, buried him in his beloved Savanur.

The Nawabs of Savanur were tolerant of all religions, and donated liberally to several Hindu temples and mutts. Betel leaves, jowar and cotton were the principal exports of the Savanur state. The Nawabs also had cordial relationship with the Dvaita mutt associated with Sri Satyabodhatirtha.[4]

In the latter part of the 19th century the Nawab of Savanur was renowned because he used to drink only water that had been brought from the Ganges. Apparently he did so because of the medicinal properties of the water of that river.[6]

The rulers of Savanur State were Sunni Muslim and used the title 'Nawab'.[8]