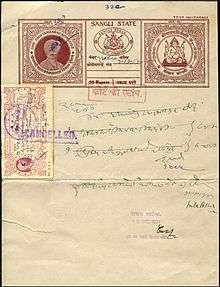 A 1934 stamped paper from Sangli State.

Sangli State [1] was one of the 11-gun salute Maratha princely states of British India.[2] It was under the Kolhapur-Dekkan Residency in the Bombay Presidency, and later the Deccan States Agency.

Sangli was part of Maratha Empire, for it had been one of the Southern Maratha Jagirs. However, there are no direct references mentioning Sangli before 1801. During the time of Shivaji, Sangli, Miraj and surrounding areas were captured from the Mughal Empire. Until 1801, Sangli was included in the Miraj Jagir. The First Chintamanrao Appasaheb Patwardhan established a different principality with Sangli as the capital city.

On 5 May 1819 Sangli State became a British protectorate. Its territory was widely scattered among other native states and British districts.

The last ruler of Sangli was Capt. HH Shrimant Raja Saheb Sir Chintamanrao II Dhundirajrao Appasaheb Patwardhan. Sangli joined the Dominion of India on 8 March 1948 and is currently a part of the state of Maharashtra.

The rulers of Sangli State were Hindu and belonged to the Patwardhan dynasty. They used the title of 'Rao'. The last ruler adopted the title 'Raja'[4]

The Patwardhan rulers were of the Chitpavan Brahmin caste, originally from the Kotawada in Ratnagiri. Haribhat, who was the family priest of another Chitpavan Brahmin, the chief of Ichalkaranji. Three of Haribhat's sons served Peshwa and distinguished themselves during various conquests. The Peshwa awarded them Jagirs of Jamkhandi State, Miraj, Sangli and Kurundwad, to honor their bravery and courage.[5]

This article is issued from Wikipedia - version of the 10/8/2015. The text is available under the Creative Commons Attribution/Share Alike but additional terms may apply for the media files.