This is a list of Indian princely states, as they existed during the British raj prior to 1947.

Before the Partition of India in 1947, hundreds (565? [1]) of Princely States, also called Native States, existed in India which were not fully and formally part of British India but enjoyed a British protectorate and indirect rule. These were the parts of the Indian subcontinent which had not been conquered or annexed by the British, often former vassals of the Mughal Pashah (Emperor).

The states are listed alphabetically; this list complements the List of princely states of British India which is arranged by region/colonial agency.

Furthermore, criteria of statehood (used for inclusion) differ between sources.

In some cases, several name variations or completely different names are included. 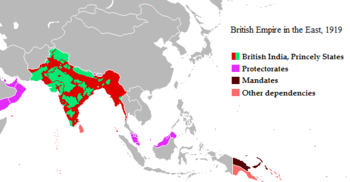