Her Majesty's High Court of Chivalry is a civil court in all matters under English and Welsh law relating to the jurisdiction of heraldry. The court has been in existence since the fourteenth century however it rarely sits.[1] The sole judge is now the hereditary Earl Marshal of England, the Duke of Norfolk, though if not a professional lawyer, he normally appoints a professional lawyer as his Lieutenant or Surrogate.[1]

In Scotland, these types of cases are heard in the Court of the Lord Lyon, which is a standing civil and criminal court, with its own Procurator Fiscal (Public Prosecutor) under the Scottish legal system.[2] 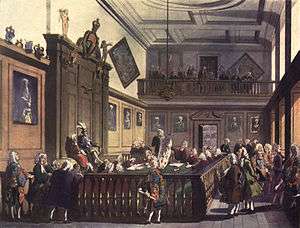 A session of the Court of Chivalry being held in the College of Arms, depicted in 1809.

The court was historically known as the Curia Militaris, the Court of the Constable and the Marshal, or the Earl Marshal's Court.[3]

Since it was created in the fourteenth century the court has always sat when required, except for the short time between 1634 and its temporary abolition by the Long Parliament in 1640 when it sat on a regular basis. During this time the court heard well over a thousand cases, of which evidence survives from 738. [4]

The court was last convened in 1954[1] for the case of Manchester Corporation v Manchester Palace of Varieties Ltd;[5] prior to this, the Court had not sat for two centuries and before hearing the case, the Court first had to rule whether it still existed.[6] The proceedings opened with the reading of various letters patents in order to made clear that the Duke of Norfolk was indeed Hereditary Earl Marshal and that he had appointed Lord Goddard as his Lieutenant in the Court. It also had ruled that the Earl Marshal was allowed to sit in judgement without the Lord High Constable of England, an office which until 1521 was also held as an hereditary dignity by The Dukes of Buckingham.[1] The case itself was that the Palace theatre had been displaying the arms of the Manchester Corporation (now Manchester City Council) both inside and on its seal and this usage implied that it was linked with the city's council. The Corporation had requested for the theatre stop using it but this had been refused. The court ruled in favour of the Corporation.[1]

More recently, in Oct 2012, Aberystwyth Town Council declared its intention to take legal action against a Facebook page displaying unauthorised use of its coat of arms: these were subsequently removed.[7]

Appeals from the Court

Since 1832, appeals from the High Court of Chivalry are to be heard directly by the Judicial Committee of the Privy Council.[8] Before 1 February 1833, in common with the admiralty and ecclesiastical courts, appeal from the Court was to the Crown in Chancery, with appeals being heard by Commissioners appointed by letters patent under the Great Seal in each case.[9] Sittings by these Commissioners became known as the "High Court of Delegates" by the time of the 1832 Act.[10]

Historically the court had two hereditary judges The Duke of Norfolk as Earl Marshal of England, and The Duke of Buckingham as Lord High Constable of England, but in 1521 Edward Stafford, 3rd Duke of Buckingham was convicted of treason, stripped of his titles and offices, and executed. Since then the office of Lord High Constable of England has only been appointed to perform ceremonial duties during a Coronation[11] and there has only been the Earl Marshal acting as the sole judge.

Lieutenant, Assessor and Surrogate to the Earl Marshal

Joint Register to the High Court of Chivalry

Cryer to the High Court of Chivalry