The Japan Brewery Company, Limited, the forerunner of Kirin Brewery, was established in 1885, taking over the assets of the Spring Valley Brewery, first founded in Yokohama in 1869 by Norwegian-American brewer, William Copeland. In a deal brokered by Thomas Blake Glover, the Japan Brewery was incorporated in Hong Kong in the name of W.H. Talbot and E.H. Abbott with financial backing provided by a group of Japanese investors including Iwasaki Yanosuke, then-president of Mitsubishi.[1][2]

The Japan Brewery first began marketing Kirin Beer in 1888. The Kirin Brewery Company was established as a separate legal entity in February 1907, purchasing the assets of the Japan Brewery and expanding the business in an era of growing consumer demand. Kirin Brewery built on the traditions of the Japan Brewery retaining the use of malted grains and hops imported from Germany and employing German brewers to oversee production. An exclusive partnership with Meidi-ya proved highly successful in the marketing of Kirin's beers both in Japan and overseas.[3] 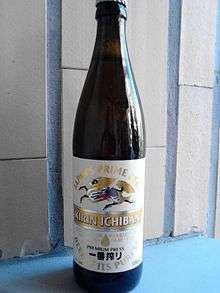 A bottle of Kirin Ichiban

Kirin Brewery sells two of the most popular beers in Japan: Kirin Lager, one of the country's oldest beer brands which started brewing in 1888; and Ichiban Shibori. Within the happoshu (low-malt) category, Kirin Tanrei is the top seller. Kirin handles domestic distribution for several foreign brands, including Budweiser and Heineken.

Kirin's brewery operations also extend overseas, through strategic alliances, subsidiaries, and affiliates, to China, Taiwan, Australia, the Philippines, Europe, New Zealand and the United States. The company holds a 100%[4] stake in Lion Nathan Limited, a consolidated subsidiary that is based in Australia but has particularly important operations in China. Kirin has a 48%[5] stake in San Miguel Brewery, the dominant brewer in the Philippines. Kirin now applies its fermentation technology to areas such as plant genetics, pharmaceuticals, and bioengineering. Although brewing and related businesses remain the core of Kirin's activities, the company is also involved in several other sectors: hard liquor, wine, soft drinks, and food products.

In Japanese, "kirin" can refer to giraffes, or to Qilin, the mythical hooved Chinese chimerical creatures. Kirin Brewery is named after the latter.

In 2010, 23.4 percent of Kirin's sales were made overseas, the highest overseas revenue among all Japanese breweries.[9]

In October 2011, the court decided that Kirin could buy a majority stake in family-run Brazilian beer Schincariol. Kirin bought a 50.45 percent stake in 2011, valued at $2.6 billion.[10]

In November 2011, Kirin Holdings Company agreed to buy out the shareholders in Brazilian beermaker Schincariol Participacoes e Representacoes, completing its biggest acquisition as it seeks growth in emerging markets ($1.35 billion was paid for the 49.54 percent stake, giving it control of all outstanding shares).[11]

In 2013 Kirin joined leading alcohol producers as part of a producers' commitments to reducing harmful drinking.[13]

In February 2013, Charoen Sirivadhanabhakdi bought the 15% stake of Singapore’s Fraser & Neave (F&N), a property-to-drinks conglomerate, from Kirin for USD $1.6 billion.[14]