The Marine Life Park is a part of Resorts World Sentosa, Sentosa, situated in southern Singapore. The 8-hectare (20-acre) park houses two attractions, the S.E.A. Aquarium and the Adventure Cove Waterpark, and features the largest oceanarium in the world.[2][3]

Walking in the SEA Aquarium 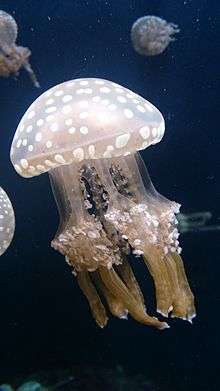 White-spotted jellyfish exhibited at the aquarium

The S.E.A. Aquarium houses the world's largest collection of manta rays, including the only giant oceanic manta ray in captivity. It also showcases 24 Indo-Pacific bottlenose dolphins, scalloped hammerhead sharks, the Japanese spider crab, and relatively uncommonly-exhibited species such as the guitarfish and the chambered nautilus.[6]

The main attractions include:[7]

Dining is possible at the Ocean Restaurant by Cat Cora and S.E.A. Side Snacks.[7]

The gift shop located at the exit of S.E.A. Aquarium sells a variety of souvenirs.[7]

The resort originally planned to include whale sharks, but conceded that it might not be feasible to house them and has dropped the plan.[8] There is ongoing controversy over captures of wild dolphins from Solomon Islands and the facilities in which they are kept in Subic Bay, Philippines. On 14 October 2012, Quezon City court issued a 72-hour temporary environment protection order to block the re-export of the dolphins to Marine Life Park, following a civil rights suit filed by animal rights groups. RWS spokesperson reiterated that the resort's acquisition of the 25 Indo-Pacific bottlenose dolphins adhere to regulations governed by the United Nations Environment Programme under the Convention on International Trade in Endangered Species of Wild Fauna and Flora.[9]

Another appeal was made and the exports to Singapore were temporarily held. When the hold had expired, RWS exported the dolphins while the court appeal was ongoing. On the flight to Singapore, one of the dolphins, Wen Wen, died.[10] This brings to three the number of dolphins that have died prior to the opening of the Dolphin Island section within the park.[11]

Rides and attractions include:[12]

The Bay Restaurant serves local favourites, Asian and Western delights. Dining is al-fresco style and situated on a terrace overlooking the Waterpark.

The park is accessible by MRT (via the Sentosa Express), bus, car and by foot.[13]