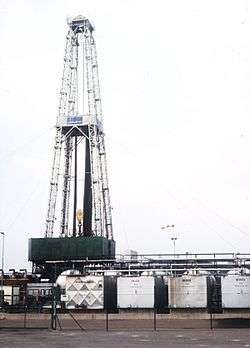 Visible surface features such as oil seeps, natural gas seeps, pockmarks (underwater craters caused by escaping gas) provide basic evidence of hydrocarbon generation (be it shallow or deep in the Earth). However, most exploration depends on highly sophisticated technology to detect and determine the extent of these deposits using exploration geophysics. Areas thought to contain hydrocarbons are initially subjected to a gravity survey, magnetic survey, passive seismic or regional seismic reflection surveys to detect large-scale features of the sub-surface geology. Features of interest (known as leads) are subjected to more detailed seismic surveys which work on the principle of the time it takes for reflected sound waves to travel through matter (rock) of varying densities and using the process of depth conversion to create a profile of the substructure. Finally, when a prospect has been identified and evaluated and passes the oil company's selection criteria, an exploration well is drilled in an attempt to conclusively determine the presence or absence of oil or gas.

Oil exploration is an expensive, high-risk operation. Offshore and remote area exploration is generally only undertaken by very large corporations or national governments. Typical shallow shelf oil wells (e.g. North Sea) cost US$10 – 30 million, while deep water wells can cost up to US$100 million plus. Hundreds of smaller companies search for onshore hydrocarbon deposits worldwide, with some wells costing as little as US$100,000.

Elements of a petroleum prospect 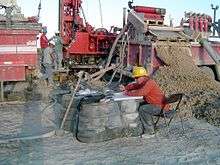 Mud log in process, a common way to study the rock types when drilling oil wells.

A prospect is a potential trap which geologists believe may contain hydrocarbons. A significant amount of geological, structural and seismic investigation must first be completed to redefine the potential hydrocarbon drill location from a lead to a prospect. Four geological factors have to be present for a prospect to work and if any of them fail neither oil nor gas will be present.

Hydrocarbon exploration is a high risk investment and risk assessment is paramount for successful project portfolio management. Exploration risk is a difficult concept and is usually defined by assigning confidence to the presence of the imperative geological factors, as discussed above. This confidence is based on data and/or models and is usually mapped on Common Risk Segment Maps (CRS Maps). High confidence in the presence of imperative geological factors is usually coloured green and low confidence coloured red.[1] Therefore, these maps are also called Traffic Light Maps, while the full procedure is often referred to as Play Fairway Analysis.[2] The aim of such procedures is to force the geologist to objectively assess all different geological factors. Furthermore, it results in simple maps that can be understood by non-geologists and managers to base exploration decisions on.

Petroleum resources are typically owned by the government of the host country. In the USA most onshore (land) oil and gas rights (OGM) are owned by private individuals, in which case oil companies must negotiate terms for a lease of these rights with the individual who owns the OGM. Sometimes this is not the same person who owns the land surface. In most nations the government issues licences to explore, develop and produce its oil and gas resources, which are typically administered by the oil ministry. There are several different types of licence. Oil companies often operate in joint ventures to spread the risk; one of the companies in the partnership is designated the operator who actually supervises the work.

Resources are hydrocarbons which may or may not be produced in the future. A resource number may be assigned to an undrilled prospect or an unappraised discovery. Appraisal by drilling additional delineation wells or acquiring extra seismic data will confirm the size of the field and lead to project sanction. At this point the relevant government body gives the oil company a production licence which enables the field to be developed. This is also the point at which oil reserves and gas reserves can be formally booked.

Oil and gas reserves are defined as volumes that will be commercially recovered in the future. Reserves are separated into three categories: proved, probable, and possible. To be included in any reserves category, all commercial aspects must have been addressed, which includes government consent. Technical issues alone separate proved from unproved categories. All reserve estimates involve some degree of uncertainty.

Proved oil and gas reserves are those quantities of oil and gas, which, by analysis of geoscience and engineering data, can be estimated with reasonable certainty to be economically producible—from a given date forward, from known reservoirs, and under existing economic conditions, operating methods, and government regulations—prior to the time at which contracts providing the right to operate expire, unless evidence indicates that renewal is reasonably certain, regardless of whether deterministic or probabilistic methods are used for the estimation. The project to extract the hydrocarbons must have commenced or the operator must be reasonably certain that it will commence the project within a reasonable time.[5]

Oil and gas reserves are the main asset of an oil company. Booking is the process by which they are added to the balance sheet.

In the United States, booking is done according to a set of rules developed by the Society of Petroleum Engineers (SPE). The reserves of any company listed on the New York Stock Exchange have to be stated to the U.S. Securities and Exchange Commission. Reported reserves may be audited by outside geologists, although this is not a legal requirement.

In Russia, companies report their reserves to the State Commission on Mineral Reserves (GKZ).