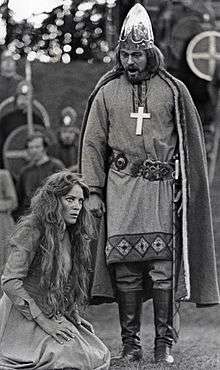 Nils Ole Oftebro acting as king Olaf II of Norway in The Saint Olav Drama at Stiklestad 1975, with Bentine Holm acting as Gudrun.

King Olaf II Haraldsson of Norway is remembered as Rex perpetuus Norvegiae, the Eternal King of Norway. July 29 is traditionally the date of the death of King Olaf at the Battle of Stiklestad, east of Nidaros (Trondheim), Norway, in 1030. King Olaf's martyrdom at Stiklestad appears to have contributed decisively to establishing Christianity throughout the nation of Norway. King Olaf was subsequently canonized in Nidaros on 3 August 1031 following efforts principally of Bishop Grimkell.[2][3]

Until the Lutheran Reformation in the 16th century, Olsok was a major church feast in the Nordic countries. The late 19th and the early 20th century saw a renewed interest in Olsok, particularly in Norway. The Roman Catholic Church in Norway recognizes Olsok as a major feast all over the country, while the Lutheran Church of Norway recognizes the day principally in Nidaros Cathedral as well as other churches. Starting with the 900th anniversary of Stiklestad in 1930, July 29 has been an official flag day (Olsokdagen) in Norway.[4][5][6] Since 1954, The Saint Olav Drama has been performed at Stiklestad each year.