Orál (Kazakh: Орал), Uralsk (Russian: Уральск) in Russian, formerly known as Yaitsk (Russian: Яицк, until 1775), is a city in northwestern Kazakhstan, at the confluence of the Ural and Chogan Rivers close to the Russian border. As it is located on the western side of the Ural river, it is considered geographically in Europe. It is the capital of the West Kazakhstan Region. Ethnic composition is dominated by Kazakhs (60%) and Russians. Population: 271,900 (2009 Census results);[2] 194,905 (1999 Census results).[2]

Oral is an agricultural and industrial center, and has been an important trade stop since its founding. Barge traffic has passed up and down the Ural River between the Caspian Sea and the Ural Mountains for centuries. Today it is one of the major entry points for rail traffic from Europe to Siberia, servicing the many new oil fields in the Caspian basin and the industrial cities of the southern Urals. It is served by Oral Ak Zhol Airport. 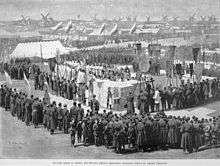 Church of Christ the Saviour in Oral, placing the first stone in 1891

Oral, founded in 1613 by Cossacks, was originally named Yaitsk, after the Yaik river, the name of the Ural river at the time. Because the Yaik Cossacks (Ural Cossacks) sided with the insurrectionists during the rebellions of Stenka Razin and Pugachev, Empress Catherine II declared on January 15, 1775 that the Yaik river would henceforth be renamed the Ural River and Yaitsk would be known as Uralsk.

The city was captured by Pugachev, and its fortress besieged from December 30, 1773 to April 17, 1774. Czarist troops under Commander Mantsurov took the city after Golytsin had taken the city of Orenburg from the rebel forces.

Pushkin visited the city with his friend Vladimir Dahl in September 1833 while doing research for his book The History of Pugachev and his novel The Captain's Daughter.

The city was under siege imposed by Cossaks during the Russian Civil War. Mikhail Frunze, Vasily Chapaev and Georgy Zhukov participated in the defence. Uralsk was renamed Oral (it is never officially renamed to Oral. Oral is a Kazakh translation of Uralsk) after the independence of Kazakhstan in 1991.

The climate of Oral is continental with long cold winters and warm, often hot summers. Under the Köppen climate classification, Oral has a hot summer humid continental climate (Köppen Dfa). Summers are extremely hot considering its position north of the 51st parallel, but winters are more reminiscent of continental climates further east rather than Europe.

FC Akzhaiyk are a Kazakhstani football club based in Petr Atoyan Stadium in Oral.

There's also a bandy club called Akzhaiyk, based in Yunost Stadium. Akzhaiyk is the only professional team in the country and plays in the 2nd highest division of Russia.[5] Yunost Stadium would have become equipped for artificial ice in 2015, but did not. Now it is rumoured to start in 2016.

All the players of the Youth-23 national team on the 2013-14 season comes from here.

The first international bandy championships in Kazakhstan was held in the city in the 1990:s, WCS for boys U15.

After the Kazakhstan national bandy team took the gold medal at the 2011 Asian Winter Games, the troup came back to Oral in triumph.[7]

A few former residents now live in Germany and play for the German national team.

Oral hosted the 2nd Republican Youth Winter Games in 2015, with competitions in bandy and ice hockey.