Ouest-France (French pronunciation: ​[wɛst.fʁɑ̃s] ; French for "West-France") is a provincial daily French newspaper known for its emphasis on local news and events. The paper is produced in 47 different editions covering events in different French départments within the régions of Brittany, Lower Normandy and Pays de la Loire. Its readership has been unaffected by the decline of newspaper reading in France, unlike most other dailies. With 2.5 million daily readers (and a circulation of almost 800 000 units), it is the most read Francophone newspaper in the world, far ahead of French national newspapers such as Le Figaro and Le Monde. 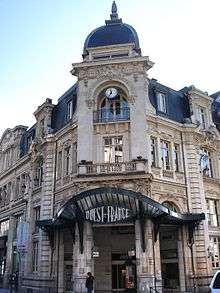 Ouest-France was founded in 1944[1] by Adolphe Le Goaziou and others following the closure of Ouest-Éclair, which was banned by Liberation forces for collaborationism during the war.[2] It is based in Rennes and Nantes and has a circulation about 792,400 (greater than any French national daily newspaper), mostly in Brittany.

Its editorial line has been strongly pro-European integration from the beginning, influenced by Christian democracy (Popular Republican Movement), now MoDem, Nouveau Centre or Union for a Popular Movement (UMP).

The 47 different editions are divided among twelve départements :