Coutances (French pronunciation: ​[kutɑ̃s]) is a commune in the Manche department in Normandy in north-western France. 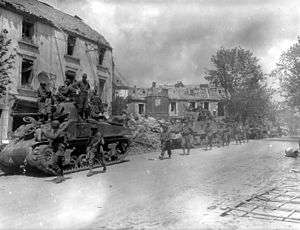 American armored and infantry forces pass through the battered town of Coutances, France, in the new offensive against the Nazis. July 1944

Capital of the Unelli, a Gaulish tribe, the town was given the name of Constantia in 298 during the reign of Roman emperor Constantius Chlorus. The surrounding region, called in Latin the pagus Constantinus subsequently became known as the Cotentin Peninsula.

The town was destroyed by invading Normans in 866, who later established settlements and incorporated the whole peninsula into the Duchy of Normandy in 933.

On July 17, 1944, during the Battle for Normandy in World War II, the city was bombed during the Allied offensive against the occupying Germans.

Coutances Cathedral is one of the major buildings of Norman architecture and contains a chapel and stained glass dedicated to Saint Marcouf. The bishop of Coutances exercised ecclesiastical jurisdiction over the Channel Islands until the Reformation, despite the secular division of Normandy in 1204. The final rupture occurred definitively in 1569.

Coutances houses a well-known botanical garden and an art museum.

Coutances is the location of Jazz sous les pommiers ("Jazz under the apple trees"), an annual jazz festival held since 1982. The festival traditionally takes place during the week of Ascension.

Coutances is twinned with: