Châteaulin (French: [ʃɑ.to.lɛ̃]; Breton: Kastellin) is a commune in the Finistère department and administrative region of Brittany in north-western France. It is a sub-prefecture of the department.

Châteaulin is located in a valley towards the center of the Finistère. Situated on the Aulne River, also Canal de Nantes à Brest there, Châteaulin is centrally located between Quimper to the south and Brest to the North. To the West, the Menez-Hom hills separate it from the Crozon peninsula and the Bay of Douarnenez which leads into the Atlantic Ocean.

In French the inhabitants of Châteaulin are known as Châteaulinois.

Châteaulin's economy rests on the twin bedrocks of food processing (salmon and poultry) and, to an ever greater extent, tourism. The Gendarmerie school on the outskirts of the town provides for a large number of families and the many recruits passing through the school provide the economic backbone of the town's night-life. A cake shop is also well-known within the area of Châteaulin,"Histoire de Macaron" is famous thanks to its tasty and wide range of macarons as well as the Java, created in 1907 by Mister Le Meur, which is a legend in the city. 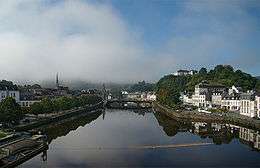 Morning fog over the Aulne river