Zakk Wylde (born Jeffrey Phillip Wielandt on January 14, 1967) is an American musician, singer, songwriter, multi-instrumentalist and occasional actor who is best known as the former guitarist for Ozzy Osbourne, and founder of the heavy metal band Black Label Society. His signature bulls-eye design appears on many of his guitars and is widely recognized. He was the lead guitarist and vocalist in Pride & Glory, who released one self-titled album in 1994 before disbanding. As a solo artist he released Book of Shadows and Book of Shadows II.

Jeffrey Phillip Wielandt was born in Bayonne, New Jersey on 14 January 1967. He started playing the guitar at the age of 8, but didn't become serious about it until his first year in high school. At the age of 14 he worked at Silverton Music in the Silverton section of Toms River, New Jersey. Wielandt grew up in Jackson, New Jersey, and went to Jackson Memorial High School, where he graduated in 1985. He has stated that he would practice playing the guitar as much as 12 hours per day and would often play the guitar almost non-stop between coming home from school and leaving for school the next morning, then sleeping through the school day. 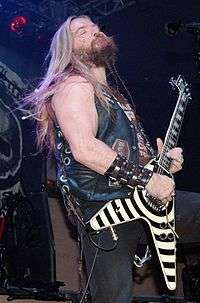 Wylde played locally with his first band Stone Henge, then later with local Jersey band Zyris. Later, he landed the role as lead guitarist and co-writer for Ozzy Osbourne. He sent Osbourne a demo tape in 1987 and was hired to replace Jake E. Lee, who replaced Brad Gillis, who replaced the deceased Randy Rhoads. Rhoads remains Wylde's foremost guitar-playing and stagecraft influence.[1]

Wylde gravitated toward a particular Les Paul guitar, which has become known as "The Grail"; his famous bullseye-painted Gibson Les Paul custom. Wylde lost the guitar in 2000 after it fell from the back of a truck transporting equipment as he was travelling between gigs in Texas. Rewards were offered to anyone that had information about the guitar. Wylde and The Grail were reunited three years later when a fan bought it at a Dallas pawn shop and saw the initials "Z.W." carved into the humbucker pickups backs. He contacted Wylde's former webmaster Randy Canis to arrange its return to Wylde. Grateful, Wylde gave the fan his signature model in exchange.[2] In 1995, Wylde auditioned for Guns N' Roses.[3][4][5]

Wylde was replaced in Osbourne's band by Joe Holmes from 1995 until his return in 2001. On January 17, 2006, Zakk Wylde was recognized at the Hollywood Rock Walk of Fame, featuring his handprints and signature, in recognition of his successful career as a musician and his contribution to the music industry. The event was open to the public and many rock celebrities were present, including Ozzy Osbourne. For a time in the mid-2000s he contributed a monthly column entitled "Brew-tality" for a guitar magazine, discussing his techniques and equipment, as well as transcribing riffs and solo sections. After auditions in 2004/2005, Ozzy Osbourne announced Wylde as the official guitarist for his album, Black Rain, which was released in 2007. On stage with Osbourne, Wylde has been credited for lending a high level of energy and passion to performances. Black Label Society's album Shot To Hell, was released on September 11, 2006 in the UK, and September 12, 2006 in the U.S. through Roadrunner records, with production by Michael Beinhorn. Black Label Society headlined the second stage at the 2006 Ozzfest, with Wylde playing double duty with Ozzy on certain dates.[6] He also joined Ozzy Osbourne for the Ozzy and Friends Tour in replacement of the Black Sabbath tour scheduled for the summer of 2012, playing a range of European dates including Graspop Metal Meeting in Belgium.[7]

Black Label Society released 'The Song Remains Not the Same' on May 10, 2011 on E1. Wylde also played a guitar solo on Black Veil Brides' cover of Kiss' "Unholy," on the 2011 EP Rebels.

Wylde, along with Steve Vai, Nuno Bettencourt, Yngwie Malmsteen, and Tosin Abasi, was featured on the Generation Axe tour in April and May 2016.

Wylde and his wife Barbaranne have four children: Hayley Rae, Hendrix, Sabbath, and Jesse[8]—who is godson to Ozzy Osbourne.[9] Wylde was a close friend of Pantera and Damageplan guitarist "Dimebag" Darrell Abbott and subsequently dedicated the song, "In this River" in his memory. He is a New York Yankees fan. As of 2011, he is in partnership with Blair's Sauces and Snacks to produce "Berserker" Hot Sauce and several variations.[10] Wylde is Irish Catholic and has spoken about his faith, calling himself a "soldier of Christ".[11] Wylde's health has come under scrutiny for several years. Wylde was asked by Sharon Osbourne to attend rehab, but left early on.[12] In August 2009, Wylde was hospitalized due to blood clots;[13] he was subsequently forced to cancel his tour with Mudvayne and Static-X.[14] After his hospitalization, Wylde stopped drinking alcohol and is now sober.[15] 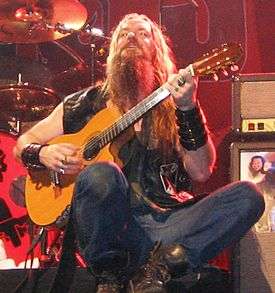 Wylde is known for his use of Gibson Les Paul Custom model guitars, equipped with EMG -81 and -85 active pickups, with a "bulls-eye" graphic on them, a design he used to differentiate himself visually from Randy Rhoads – who was also frequently identified by his cream Les Paul Custom, the guitar he has used since he was 12 years old. The "bulls-eye" paint job was originally supposed to look like the spiral from the movie Vertigo, but when it came back incorrectly from the luthier, he liked the result and stuck with it.[16] He was sometimes criticized by viewers and media for taking the idea of the "bulls-eye" from Eddie Ojeda from Twisted Sister, however, both Ojeda and Wylde deny it and suppose it to be coincidence. One of Wylde's favorite stage guitars is a GMW RR-V, a model that is famously known as the "Polka-dot V" Created originally by luthier Karl Sandoval of California, used by Randy Rhoads, often mistaken as a custom Flying V.

Wylde's signature Les Pauls include a red flame-maple bulls-eye model, a black and antique-white bulls-eye model, an orange "buzz-saw" model, the pattern on which was inspired by a design on a Zippo lighter,[17] and a "camo" bulls-eye model with mother of pearl neck inlays and a green camouflage paint scheme. His original bulls-eye Les Paul was purchased from one of the owners of Metaltronics Amplification. Metaltronics was building a one-off live rig for Wylde that was designed around one of the owner's guitars, a creamy white Les Paul Custom with EMG pickups, which would later become known as "The Grail". Wylde has a custom Dean Splittail with a mud splatter bulls-eye graphic, as well as a signature Splittail shaped Gibson model called the "ZV". Another Dean in his collection is a Dime series Razorback with custom Bulls-eye graphics ordered for him specially by Dimebag Darrell shortly before his murder; since receiving the guitar, he has only ever used it on stage to play "In This River," Zakk's personal tribute to Dimebag.

At the 2015 NAMM Show, Wylde announced his new company called Wylde Audio and provided a preview of his new line of custom guitars and amplifiers.[19] Currently he now is seen playing Wylde Audio equipment almost exclusively.[20]

Wylde has made guest appearances on various albums by other artists: 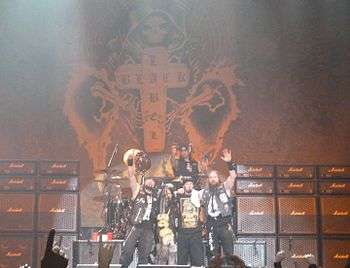