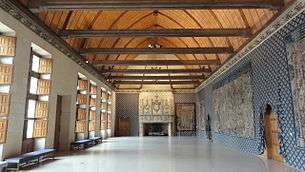 Hall of the Tau

The Palace of Tau (French: Palais du Tau) in Reims, France, was the palace of the Archbishop of Reims. It is associated with the kings of France, whose coronation was held in the nearby cathedral of Notre-Dame de Reims and the following coronation banquet in the palace itself.

A large Gallo-Roman villa still occupied the site of the palace in the 6th and 7th centuries, and later became a Carolingian palace. The first documented use of the name dates to 1131, and derives from the plan of the building, which resembles the letter Τ (tau, in the Greek alphabet). Most of the early building has disappeared: the oldest part remaining is the chapel, from 1207. The building was largely rebuilt in Gothic style between 1498 and 1509, and modified to its present Baroque appearance between 1671 and 1710 by Jules Hardouin-Mansart and Robert de Cotte. It was damaged by a fire on 19 September 1914, and not repaired until after the Second World War.

The palace has housed the Musée de l'Œuvre since 1972, displaying statuary and tapestries from the cathedral, together with the remains of the cathedral treasury and other objects associated with the coronation of the French kings.

The Palace of Tau, together with the Cathedral of Notre-Dame and the former Abbey of Saint-Remi, became a UNESCO World Heritage Site in 1991. It attracts around 100,000 visitors each year.