The Chauvet-Pont-d'Arc Cave in the Ardèche department of southern France is a cave that contains the earliest known and best preserved figurative cave paintings in the world,[1] as well as other evidence of Upper Paleolithic life.[2] It is located near the commune of Vallon-Pont-d'Arc on a limestone cliff above the former bed of the Ardèche River, in the Gorges de l'Ardèche.

Discovered on December 18, 1994, it is considered one of the most significant prehistoric art sites and the UN’s cultural agency UNESCO granted it World Heritage status on June 22, 2014.[3]

The cave was first explored by a group of three speleologists: Eliette Brunel-Deschamps, Christian Hillaire, and Jean-Marie Chauvet for whom it was named. Chauvet (1996) has a detailed account of the discovery. In addition to the paintings and other human evidence, they also discovered fossilized remains, prints, and markings from a variety of animals, some of which are now extinct.

Further study by French archaeologist Jean Clottes has revealed much about the site. The dates have been a matter of dispute but a study published in 2012 supports placing the art in the Aurignacian period, approximately 32,000–30,000 years BP. As recently as spring 2016, an additional 88 radiocarbon dates indicate two periods of habitation. One from 37,000 to 35,000 years ago and another from 31,000 to 28,000. [4]

The cave is situated above the previous course of the Ardèche River before the Pont d'Arc opened up. The gorges of the Ardèche region are the site of numerous caves, many of them having some geological or archaeological importance. The Chauvet Cave is uncharacteristically large and the quality, quantity, and condition of the artwork found on its walls have been called spectacular.

Based on radiocarbon dating, the cave appears to have been used by humans during two distinct periods: the Aurignacian and the Gravettian.[5] Most of the artwork dates to the earlier, Aurignacian, era (30,000 to 32,000 years ago). The later Gravettian occupation, which occurred 25,000 to 27,000 years ago, left little but a child's footprints, the charred remains of ancient hearths, and carbon smoke stains from torches that lit the caves.

After the child's visit to the cave, evidence suggests that due to a landslide which covered its historical entrance, the cave had been untouched until it was discovered in 1994.[6] The footprints may be the oldest human footprints that can be dated accurately.

The soft, clay-like floor of the cave retains the paw prints of cave bears along with large, rounded depressions that are believed to be the "nests" where the bears slept. Fossilized bones are abundant and include the skulls of cave bears and the horned skull of an ibex.[7] 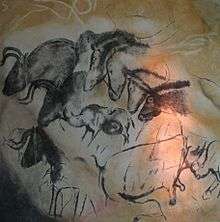 Replica of Paintings in the Chauvet Cave 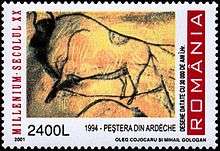 Image of Steppe Wisent (Bison priscus). Paintings in the Chauvet Cave on Post stamp of Romania 2001 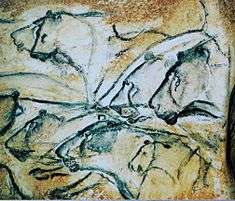 Replica of Painting of Lions

A Group of Rhinos

Hundreds of animal paintings have been catalogued, depicting at least 13 different species, including some rarely or never found in other ice age paintings. Rather than depicting only the familiar herbivores that predominate in Paleolithic cave art, i.e. horses, cattle, mammoths, etc., the walls of the Chauvet Cave feature many predatory animals, e.g., cave lions, panthers, bears, and cave hyenas. There are also paintings of rhinoceroses.[8]

Typical of most cave art, there are no paintings of complete human figures, although there is one partial "Venus" figure composed of a vulva attached to an incomplete pair of legs. Above the Venus, and in contact with it, is a bison head, which has led some to describe the composite drawing as a Minotaur.[9] There are a few panels of red ochre hand prints and hand stencils made by blowing pigment over hands pressed against the cave surface. Abstract markings—lines and dots—are found throughout the cave. There are also two unidentifiable images that have a vaguely butterfly or avian shape to them. This combination of subjects has led some students of prehistoric art and cultures to believe that there was a ritual, shamanic, or magical aspect to these paintings.[10]

One drawing, later overlaid with a sketch of a deer, is reminiscent of a volcano spewing lava, similar to the regional volcanoes that were active at the time. If confirmed, this would represent the earliest known drawing of a volcanic eruption.[11]

The artists who produced these unique paintings used techniques rarely found in other cave art. Many of the paintings appear to have been made only after the walls were scraped clear of debris and concretions, leaving a smoother and noticeably lighter area upon which the artists worked. Similarly, a three-dimensional quality and the suggestion of movement are achieved by incising or etching around the outlines of certain figures. The art is also exceptional for its time for including "scenes", e.g., animals interacting with each other; a pair of woolly rhinoceroses, for example, are seen butting horns in an apparent contest for territory or mating rights.

Some archaeologists have questioned these dates. Christian Züchner, relying on stylistic comparisons with similar paintings at other well-dated sites, expressed the opinion that the red paintings are from the Gravettian period (c. 28,000–23,000 BP) and the black paintings are from the Early Magdalenian period (early part of c. 18,000–10,000 BP).[13] Pettitt and Bahn also contended that the dating is inconsistent with the traditional stylistic sequence and that there is uncertainty about the source of the charcoal used in the drawings and the extent of surface contamination on the exposed rock surfaces.[14][15][16] Stylistic studies showed that some Gravettian engravings are superimposed on black paintings proving the paintings' older origins.[17]

By 2011, more than 80 radiocarbon dates had been taken, with samples from torch marks and from the paintings themselves, as well as from animal bones and charcoal found on the cave floor. The radiocarbon dates from these samples suggest that there were two periods of creation in Chauvet: 35,000 years ago and 30,000 years ago.[18]

A research article published in Proceedings of the National Academy of Sciences in May 2012 by scientists from the University of Savoy, Aix-Marseille University and the Centre National de Prehistoire confirmed that the paintings were created by people in the Aurignacian era, between 30,000 and 32,000 years ago. The researchers’ findings are based on the analysis using geomorphological and 36
Cl dating of the rock slide surfaces around what is believed to be the cave’s only entrance. Their analysis showed that the entrance was sealed by a collapsing cliff some 29,000 years ago. Their findings put the date of human presence in the cave and the paintings in line with that deduced from radiocarbon dating, i.e., between 32,000–30,000 years BP.[19][20]

The cave has been sealed off to the public since 1994. Access is severely restricted owing to the experience with decorated caves such as Lascaux found in the 20th century, where the admission of visitors on a large scale led to the growth of mold on the walls that damaged the art in places. In 2000 the archaeologist and expert on cave paintings Dominique Baffier was appointed to oversee conservation and management of the cave. She was followed in 2014 by Marie Bardisa.

Caverne du Pont-d'Arc, a facsimile of Chauvet Cave on the model of the so-called "Faux Lascaux", was opened to the general public on 25 April 2015.[21] It is the largest cave replica ever built worldwide, ten times bigger than the Lascaux facsimile. The art is reproduced full-size in a condensed replica of the underground environment, in fact a circular building above ground, a few kilometres from the actual cave.[22] Visitors’ senses are stimulated by the same sensations of silence, darkness, temperature, humidity and acoustics, carefully reproduced.[23]