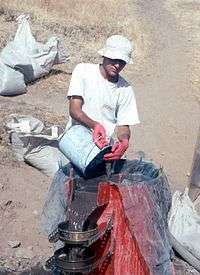 Pal(a)eoethnobotany or Archaeobotany, "is the study of remains of plants cultivated or used by man in ancient times, which have survived in archaeological contexts".[1] Paleoethnobotany is the archaeological sub-field that studies plant remains from archaeological sites. Basing on the recovery and identification of plant remains and the ecological and cultural information available for modern plants, the major research themes are the use of wild plants, the origins of agriculture and domestication, and the co-evolution of human-plant interactions.

Plant macrofossils are preserved through four main modes of preservation at archaeological sites. First, plant remains, usually cereal grains, chaff, seeds and charcoal are largely reduced to elemental carbon (charred) when they are heated in a reducing atmosphere.[2] These are referred to as 'charred' or 'carbonised' plant remains. This mode of preservation is biased towards plant remains that come into contact with fire, through cooking or fuel use, and those which are less fragile, such as cereal grains and nutshell.[3] Second, plant remains deposited in permanently waterlogged anoxic conditions are preserved as the absence of oxygen prohibits microbial activity.[4] This mode of preservation occurs in deep archaeological features such as wells, in urban settlements where organic refuse is rapidly deposited, and at settlements adjacent to lakes or rivers. A wide range of plant remains are usually preserved, including seeds, fruit stones, nutshells, leaves, straw and other vegetative material.[5] Third, calcium-phosphate mineralisation of plant remains occurs usually in latrine pits and in middens, as plant remains are completely replaced by calcium-phosphate. In latrine pits, plant remains which have been consumed by humans are the most common items, such as seeds of flavourings, fruit pips and fruit stones.[6] Finally, plant remains are preserved by desiccation in arid environments, where the absence of water limits decomposition. Delicate vegetative plant remains are preserved, such as onion skin and artichoke bracts, alongside fruit stones, cereal chaff and seeds of wild plants.[7]

Paleoethnobotanists use a variety of methods to recover and identify plant remains. Charred plant remains are usually recovered by flotation. The matrix (the soil from a suspected archaeological feature) is slowly added to agitated water. The soil, sand, and other heavy material, known as heavy fraction, will sink to the bottom. The less dense organic material such as charred seeds, grains and charcoal will tend to float to the surface. The material that floats to the top, called light fraction, is poured into a sieve (usually 250-500 µm). The light fraction is then dried and later examined under a low power microscope. Samples of the heavy fraction are also gathered for later analysis. Flotation can be undertaken manually with buckets, [8] or by machine-assisted flotation where water is circulated through a series of tanks by a pump. Waterlogged plant remains are separated from the matrix by a combination of wet-sieving and/or small-scale flotation in a laboratory. [9] Desiccated plant remains are usually recovered by dry-sieving, using a stack of different sieves to separate larger items such as cereal straw and fruit stones from smaller items such as weed seeds. [10]

Identification of macroremains is then usually carried out under a stereomicroscope, using morphological features such as shape and surface features in the case of seeds, or microanatomy in the case of wood or charcoal. Identification literature as well as a comparative collection of modern plant materials are crucial for reliable results. Depending on the type of material, and its condition, also other methods such as thin sections or SEM are applied.

Paleoethnobotanists also recover and analyze microremains (such as phytoliths and pollen), human and animal excrements (paleofeces, sometimes called coprolites), or plant impressions in ceramic sherds and clay (such as in daub).

Palynology is a mature and distinct scientific discipline that studies pollen, typically in the context of reconstructing past environments.

Dendrochronology, the study of growth rings on trees relating to study of past environments, is another scientific discipline useful to paleoethnobotanical study.

The work done in paleoethnobotany can be divided into field work, collections management, systematic description of species, and theories into the origins of human and plant interaction. Some examples of this analysis:

A paleoethnobotanist may find discrete concentrations of burned or dried remnants of seeds in an area of discolored soil (a possible hearth feature). If later analyses indicates that the remnants were of only mature wild seeds of a type of plant that grows locally, it could be inferred that the site was only visited seasonally. Such an inference could be supported by a lack of other features that would suggest that no permanent shelters were built at the site.

Alternatively, a paleoethnobotanist may find that a fire pit feature contains concentrated remnants of a wide variety of edible wild plants that mature throughout the year. An archaeologist may find features at the site that indicate some sort of semi-permanent dwellings (such as post holes and middens). The middens may have concentrations of animal remains, identified by a zooarchaeologist as those of wild game, with a variety of species-specific maturity levels. In that case, a more permanent settlement may be inferred, perhaps to the level of a village. Such an analysis of the archaeological features could suggest a society of hunter-gatherers who inhabited the site on a more-or-less year-round basis.

A paleoethnobotanist may also find concentrated remains of plants that typically are only grown through active cultivation (such as cereals, legumes, and oilseeds). At the same site, an archaeologist might identify features such as stone walls surrounding enclosures arrayed in a pattern, and deep, layered middens with concentrations of domesticated animal remains such as goats or pigs. An analysis of the site, set within the context of the archaeological features and animal and plant remains, would suggest a settled agrarian community.

This article is issued from Wikipedia - version of the 5/5/2015. The text is available under the Creative Commons Attribution/Share Alike but additional terms may apply for the media files.