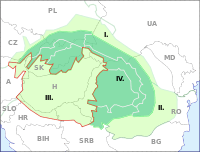 The Pannonian Basin (marked III.), enclosed by the Carpathians and the Transylvanian Plateau (IV.) to the east and north. Also shown: the Romanian Lowlands (II.) and the Subcarpathian depressions (I.) beyond the Carpathians (also known as Transcarpathia). 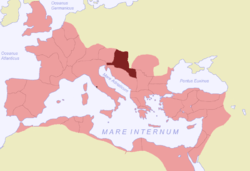 Topography of the basin and surrounding mountains

A farm on the Hortobágy National Park 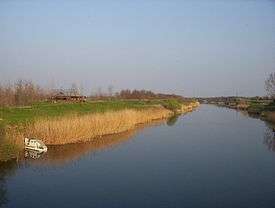 The Danube-Tisa-Danube Canal near the village of Rumenka, close to Novi Sad

The Pannonian Basin or Carpathian Basin[1][2][3][4] is a large basin in Central Europe. The geomorphological term Pannonian Plain is more widely used for roughly the same region though with a somewhat different sense, with only the lowlands, the plain that remained when the Pliocene Epoch Pannonian Sea dried out.

The Pannonian Basin lies in the southeastern part of Central Europe, or at the boundary between Central, Eastern and Southeastern Europe (Balkans). It forms a topographically discrete unit set in the European landscape, surrounded by imposing geographic boundaries - the Carpathian Mountains, the Alps, the Dinarides and the Balkan mountains. The Rivers Danube and Tisza divide the basin roughly in half. It extends roughly between Vienna in the northwest, Zagreb in the southwest, Belgrade in the southeast and Satu Mare in the northeast.

In terms of modern state boundaries, the basin centres on the territory of Hungary, but it also covers Vojvodina and Mačva[5] regions of Serbia, Central Croatia and Slavonia, western Slovakia, the Eastern Slovak Lowland (including the southwestern tip of Ukraine), besides the border regions of northern Bosnia and Herzegovina, some western portions of Romania, and the eastern extremities of Slovenia and of Austria. The name "Pannonian" comes from Pannonia, a province of the Roman Empire. Only the western part of the territory of modern Hungary (the so-called Transdanubia) formed part of the ancient Roman Province of Pannonia; this comprises less than 29% of modern Hungary, therefore Hungarian geographers avoid the terms "Pannonian Basin" and "Pannonian Plain".

In English, the terms "Pannonian Basin" and "Carpathian Basin" are used synonymously. The name "Pannonian" is taken from that of Pannonia, a province of the Roman Empire. The historical province overlapped but was not coterminous with the geographical plain or basin. Pannonia Inferior covered much of the western half of the basin, as far as the Danube. Pannonia Superior included the western fringe of the basin as well as part of the Eastern Alps, as far as Virunum. The southern fringe of the basin was in Dalmatia and Moesia. The eastern half of the basin was not conquered by the Romans, and was considered part of Sarmatia, inhabited by the Iazyges. Likewise, the parts north of the Danube (now in western Slovakia) were not in the empire; they were considered part of Germania, inhabited by the Quadi.

The term Pannonian Plain refers to the lowland parts of the Pannonian Basin as well as those of some adjoining regions like Lower Austria, Moravia, Bosnia. The lands adjoining the plain proper are sometimes also called peri-Pannonian. 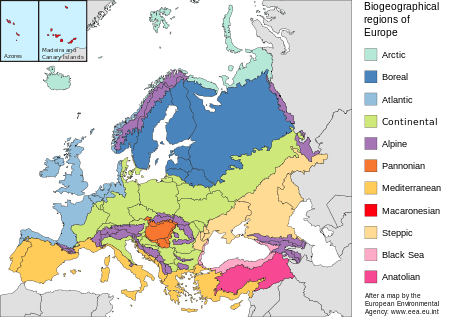 Although rain is not plentiful, it usually falls when necessary and the plain is a major agricultural area; it is sometimes said that these fields of rich loamy loess soil could feed the whole of Europe. For its early settlers, the plain offered few sources of metals or stone. Thus when archaeologists come upon objects of obsidian or chert, copper or gold, they have almost unparalleled opportunities to interpret ancient pathways of trade. 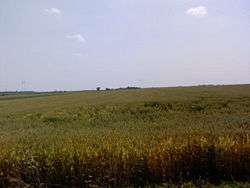 Note: The Transylvanian Plateau and the Lučenec-Košice Depression (both parts of the Carpathians) and some other lowlands are sometimes also considered part of the Pannonian Plain in non-geomorphological or older divisions.

Relatively large or distinctive areas of the plain that do not necessarily correspond to national borders include: 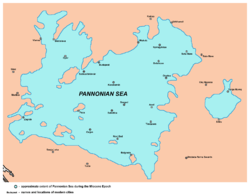 Approximate extent of Pannonian Sea during the Miocene Epoch

The Pannonian Basin has its geological origins in the Pannonian Sea, a shallow sea that reached its greatest extent during the Pliocene Epoch, when three to four kilometres of sediments were deposited.

The plain was named after the Pannon named Medes. Various different peoples inhabited the plain during its history. In the first century BC, the eastern parts of the plain belonged to the Dacian state, and in the first century AD its western parts were subsumed into the Roman Empire. The Roman province named Pannonia was established in the area, and the city of Sirmium, today Sremska Mitrovica, Serbia, became one of the four capital cities of the Roman Empire in the 3rd century.

The Principality of Hungary established in 895 by the Magyars was centered on the plain and included almost all of it (as did the former Avar Kingdom as well). It was established as the Christian kingdom of Hungary in AD 1000, with the coronation of Stephen I of Hungary.

The kingdom of Hungary by the 11th century comprised the entire Pannonian basin, but the changing fates of this part of Europe during the Ottoman wars of the 14th to 17th centuries left the Pannonian basin divided between numerous political entities. After the Battle of Mohács in 1526, the central and eastern regions of the kingdom and the plain on which they lay were incorporated into the Ottoman Empire, while the remainder to the north-west was subsumed into the holdings of the Habsburg Monarchy and retitled Royal Hungary. Under Ottoman administration, the plain was reorganized into the Eyalet of Budim, the Eyalet of Egri, the Eyalet of Sigetvar, and the Eyalet of Temeşvar.

The Pannonian Plain was frequently a scene of conflict between the two empires. At the end of the 17th century the Habsburgs won decisive battles against the Ottomans, and most of the plain gradually came under Habsburg rule. Under Habsburg rule the region was eventually reorganized into the Kingdom of Hungary, the Banat of Temeswar, the Military Frontier, the Kingdom of Croatia, the Kingdom of Slavonia and Voivodeship of Serbia and Temes Banat.

The Habsburg Monarchy was subsequently transformed into the Austrian Empire (in 1804) and later became Austria-Hungary (in 1867). Most of the plain was located within the Hungarian part of Austria-Hungary, since all other Habsburg possessions in the plain were integrated into the Kingdom of Hungary until 1882. The autonomous Kingdom of Croatia-Slavonia, which was one of the Lands of the Crown of St. Stephen, comprised the south-western portion of the plain.

With the dissolution of Austria-Hungary after World War I, the region was divided between Hungary, Romania, Czechoslovakia, Austria, and the Kingdom of Serbs, Croats and Slovenes (renamed to Yugoslavia in 1929). The borders drawn in 1918 and 1919 are mostly preserved as those of the contemporary states of Hungary, Serbia, Croatia, Slovakia, Romania and Austria.

This is a list of cities in the Pannonian Basin with a population larger than 100,000 within the city proper: