This article is about the town in the Indian state of Haryana. For information on the historic massacre of civilians in the town, see Pataudi massacre.

Pataudi is a town in Gurgaon district in the Indian state of Haryana. It is located 26 km (16.2 mi) from Gurgaon, at the foot hills of the Aravali hills.

Pataudi was the seat of Pataudi State which was ruled by the Nawabs of Pataudi. The 8th Nawab, Iftikhar Ali Khan Pataudi, played cricket for both England and India and captained the latter. His son the 9th Nawab also captained the Indian cricket team.

Pataudi Road is included as the new growth corridors in Gurgaon.[2][3] It takes only 30 minutes to reach Pataudi and is only 27 Kilometers from Gurgaon city.[4]

The city was part of Pataudi State which was formed in 1804 by British East India Company by 40 villages and Pataudi town as reward to Faiz Talab Khan a Pashtun of the Barech tribe for aiding the Company against the Maratha Empire during the Second Anglo-Maratha War. Thus Faiz Talab Khan is known as Nawab of Pataudi.[5][6]

Pataudi became the part of Dominion of India later Republic of India in 1947 whe British Raj ended. Former India cricket team captain Iftikhar Ali Khan Pataudi or Nawab of Pataudi Sr. remained rular until 1952 when was succeeded by his son Mansoor Ali Khan Pataudi also former India cricket team captain until 1971 when 26th amendment to the Constitution of India, the Government of India abolished all official symbols of princely India, including titles, privileges, and remuneration. There home Pataudi Palace is now a heritage hotel.

In 1984, a mob under the guidance of Indian National Congress' leader Lalit Maken set fire to Pataudi's Gurdwara which created a panic in the city. This came after Prime Minister of India Indira Gandhi was shot by her two Sikh bodyguards.[7]

As of 2001 India census,[9] Pataudi had a population of 16,064. Males constitute 53% of the population and females 47%. Pataudi has an average literacy rate of 57%, lower than the national average of 59.5%: male literacy is 65%, and female literacy is 48%. In Pataudi, 17% of the population is under 6 years of age. Now Pataudi is dominated by people from Ahirs community [10] which is a martial community. Their main occupation is farming. Rao Kanwar Singh Yadav the famous freedom fighter of Quni Daultabad village is also from Pataudi.[11][12]

Patuadi is a reserved constituency, it has more than 45 thousand of Ahir votes out of 1,35,000 total votes in it. The Backward Classes and the Scheduled Castes constitute about 70,000 of the votes. The Rajputs constitute 12,000 with about equal number of Jats.[13] 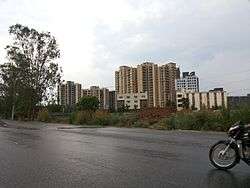 Pataudi Road is now is in the vicinity of three major highways like National Highway 8 (India) and the upcoming Kundli–Manesar–Palwal Expressway and the proposed Dwarka Expressway.[14] Manesar is just four kilometers from Pataudi Road. Several residential units coming up on the Pataudi Road, the logistics park, Special Economic Zones (SEZs) by Reliance, Raheja Engineering SEZ[15] and a commercial sector.

Adding to this are the government's plans to upgrade infrastructure facilities along the belt. As per the new Gurgaon-Manesar Master Plan 2021, the availability of land for development has opened up huge possibilities, mainly in the new sectors along Pataudi Road, slated to emerge as a growth corridor in the near future. A draft development plan for Pataudi town, too, is being prepared. It is expected to have about 4-5 sectors.[16]

Pataudi Road is proposed to be widened to 135 meters. The sectors roads too would be atleat 60 meters wide.[15] Land Acquisition for creation of Residential Sectors ( Sector-1 Part-1 Pataudi )

The Gurgaon Urban Estates Department had on December 31, 2013, issued notifications under Section 4 of the Land Acquisition Act, 1894, to acquire land for a proposed university in Sector 68, Gurgaon (660 acre), Sector-1 Part-I, Pataudi (379 acre), Sector-1, Farrukhnagar (448.75 acre) and for public utilities from Sector 68 to 74 and Sector 99 to 115 (138.93 acre) and several acres for sector roads. Around 300 land owners were sent notices under Section 4 of the law expressing the intent to take over the land by the Bhupinder Singh Hooda government under this law, just a day before the new land acquisition act came into force.

The New Bharatiya Janata Party government headed by Manohar Lal Khattar decided to go ahead with the process. The 363 acres of land are spread across four villages.

Surely the farmers are opposing the acquisition process and registered the same with the Chief Minister. However, the acquisition process has the backing of Gurgaon MP and a minister in Narendra Modi government, Rao Inderjit Singh who said "The acquisition will not be withdrawn as the process has already started. The state will develop residential sectors in this area. As far as the issue of Section 4 notices on the last day is concerned, it was legally tenable. There was nothing wrong."

Noticeable is the fact that The previous Hooda led Congress government initiated land acquisition under a law which was due to be replaced the very next day. Land owners got notices dated December 31, 2013 whereas the Land Acquisition, Rehabilitation and Resettlement Act, 2013 came into effect on January 1, 2014.

The new law, the land owners said, will make them eligible for compensation of around Rs 2 crore per acre and 20% of the developed land. On the other hand, the British-era law granted nearly half of the compensation and no rights in developed land whatsoever. So basically, land owners are not outright against land acquisition --- they are ready to part with their land, albeit at a higher price.

The Administrator of Haryana Urban Development Authority Gurgaon P.C. Meena, however, said that the rights of the land owners and farmers will be protected even if the notifications for land acquisition were issued under the old law and they would be given compensation at the enhanced rates as per the provisions of the new law. 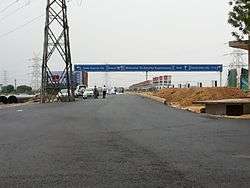 Northern Peripheral Road commonly known as Dwarka Expressway road is being developed under the public private partnership (PPP) model. This stretch will connect Dwarka with National Highway 8 at Kherki Dhaula and will pass Pataudi Road. The NPR stretch has been planned as an alternate link road between Delhi and Gurgaon, and is expected to ease the traffic situation on the Delhi Gurgaon Expressway. The road will also provide connectivity to the much-touted Reliance-HSIIDC SEZ besides the Garhi Harsaru dry depot.[17]

Much like Delhi, Gurgaon too will have a BRT corridor to decongest traffic on the Northern Peripheral Road. In several sections, the NPR will have provisions for the Bus Rapid Transit (BRT) corridor to ensure smooth flow of traffic. The road will be fully developed in March 2012.[18]

Delhi Western Peripheral Expressway or Kundli–Manesar–Palwal (KMP) Expressway is 135.6 km (84.3 mi) long Expressway being constructed in the Indian state of Haryana. The KMP Expressway is the driving force behind the rise of Gurgaon-Pataudi Road.[19][20]

A new link road has been made by HUDA connecting Manesar with Patuadi road near Wazirpur village. The length of the road is 3.5 km.[21][22]

Pataudi Road railway station operated by Northern Railway of Indian Railways. The station located on 4 km from Pataudi and that forms a part of the larger Indian railways network, where trains connect Gurgaon to Delhi and other important cities in India like Mumbai, Kolkata, Ahmadabad and Jaipur.

Connectivity to Pataudi road is extremely in bad shape. Also, one cannot take a right turn from the Hero Honda Chowk, as the highway does not have a cut over here. So to reach Pataudi road, commuters have to go straight for another two kilometers till Kherki Dola toll tax collection point and then take a U-turn to come back to Hero Honda Chowk.[23]

The road connecting Pataudi from Gurgaon is one of the worst roads in Gurgaon District. This twelve kilometer Narrow road is flooded by pathholes, unwanted speed brakers and filled with rainwater is dangerous to drive.[23] Despite big developers and SEZ flooding Pataudi road connectivity is decade away.[24] The widening of Gurgaon-Pataudi Road to 135 metres is complete and the 60 metres sectors roads are under construction.[25] in janaula 2 km from pataudi