Piliyanadala (Sinhala:පිළියන්දල) is a suburb of the city of Colombo in Sri Lanka, which is situated approximately 18 kilometres (11 mi) south of Colombo. It is one of the relatively more populated suburbs located in the Colombo District of the Western Province, Sri Lanka and it is surrounded by the suburbs of Moratuwa, Kesbawa, Maharagama, Pannipitiya, Bandaragama and Kahathuduwa. Piliyandala has a thriving market in the town centre (next to the clock tower) and the Kesbewa Urban Council is also located in Piliyandala.

In 2008 the suburb was subject to a bus bombing, which was committed by the Liberation Tigers of Tamil Eelam.

According to local residents and documentation, Piliyandala clock tower is one of the tallest in the island rising to a height of 78 feet with a 16 foot girth. The clock tower was erected by D. Simon Samarakoon, in the memory of his parents Cornelis Wijewickrema Samarakoon and his wife. The foundation stone for the erection of the clock tower was laid by the then Minister of Local Government C.W.W. Kannangara on 11 September 1952. The construction being completed in seven months, the clock tower was commissioned on 30 April 1953 and has been running ever since.

The clock tower in existence for more than 60 years is considered to be of archaeological value thus providing the Piliyandala town with a historical background.[1] 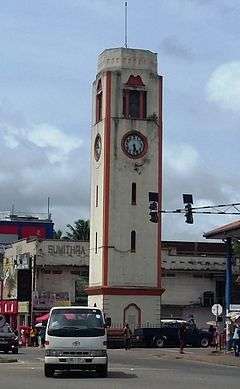 Piliyandala Central College, the first national sports school established in Sri Lanka is situated in this suburb. It is one of the first central colleges founded by Hon. C. W. W. Kannangara and has about 5,000 students. The school provides facilities for sports such as Rugby, Carrom, Cricket, Football, Girls' Football, Chess, Wushu, Badminton, Karate, Swimming, Athletics, Basketball, Volleyball and Netball. Other popular schools in the area include;[2]

Piliyandala has a number of Buddhist religious places of the Sinhalese belong to the Theravada school, including:

Piliyandala also has a number of churches, including: 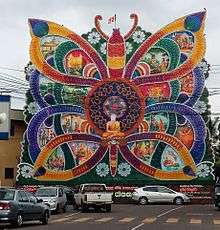 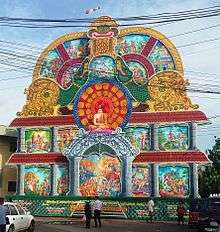 The narration of Jātaka tales has been developed into Thoran tradition which is unique to Sri Lankan Buddhist culture. Continuing this iconic tradition, in Vesak season of Sri Lanka, an electrically lit pandol which is famous as Piliyandala Thorana is erected in front of the Piliyandala Central College. In these pandols, each scene of a selected Jataka tale will be boarded with different colored lights which created attractive patterns and sequence of different lighting patterns was electronically programmed.