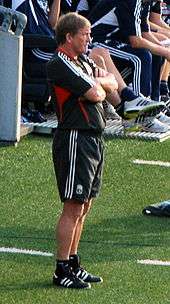 After the Heysel Stadium disaster in 1985 and Joe Fagan's subsequent resignation as manager, Kenny Dalglish served as the player-manager of Liverpool from 1985 to 1990.

A player-coach (also playing coach, captain-coach, or player-manager) is a member of a sports team who simultaneously holds both playing and coaching duties. A player-coach may be a head coach or an assistant coach. They may make changes to the squad and also play on the team.

Very few current major professional sports teams have head coaches who are also players, though it is extremely common for senior players to take a role in managing more junior athletes. Historically, when professional sports had much less money to pay players and coaches or managers, it was much more common to find them. Likewise, where player-coaches exist today, they are more common at the lower levels where money is less available, but not exclusively. 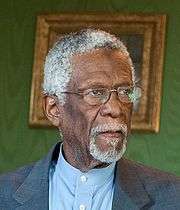 Bill Russell served as the player-coach of the Boston Celtics from 1966 to 1969.

The player-coach was, for many decades, a long-time fixture in professional basketball. Many notable coaches in the NBA served as player-coaches, including Bill Russell and Lenny Wilkens. This was especially true up through the 1970s, when the league was not as financially successful as it is today, and player-coaches were often used to save money. The practice fell out of favor in the 1980s (though Mike Dunleavy Sr., while an assistant coach with the Milwaukee Bucks, once came out of retirement and played several games when a rash of injuries decimated the team). Today, the collective bargaining agreement between the NBA and the players' union prohibits the use of player-coaches, in order to avoid circumventing the league's salary cap, as coaches' salaries are not counted under the cap. Therefore, if a player is to serve as a coach, he would have to receive commission from his contract as a player. The player, then, is not technically an official coach of his team but instead simply a coach in name. One example of a player in recent years who was groomed for eventual official coaching duties using this practice was Avery Johnson.

In the early days of professional American football, player-coaches were common. During the 1920s, legendary player-coaches in the NFL include Curly Lambeau (who played for the Green Bay Packers from 1919–1929, and served as their head coach from 1919–1949) and George Halas who held similar roles for the Chicago Bears, a team for which he was also part-owner and business manager. Jimmy Conzelman was player-coach for four different teams during the 1920s. As professional football became more respectable, and began to make more money, player-coaches (especially head coaches) became rare. In the mid-1950s Tom Landry played defensive back while serving as defensive coordinator for the New York Giants. In the early 1970s, when Landry was coach of the Dallas Cowboys, he made running back Dan Reeves a player-coach. More modern players have acted as player-coaches in an unofficial capacity, such as journeyman quarterback Steve DeBerg, who served as an unofficial mentor for younger, more skilled arms while also serving as their backup.

In association football, this situation usually arises when a manager leaves a team suddenly, and the chairman has to make a quick decision to appoint someone new as a caretaker manager. The chairman will usually either ask a coach to take temporary charge or turn to the one of club's most senior players. If this particular player gains good results for the team during his time in charge, he may be appointed full-time manager, which leaves him a player–manager. However, there are instances when a free agent is appointed by a new team as a manager and offers his playing abilities.

Successful football player–managers include Kenny Dalglish (Liverpool), Graeme Souness (Rangers), Glenn Hoddle (Swindon Town and Chelsea), Bryan Robson (Middlesbrough), Peter Reid (Manchester City), Ruud Gullit (Chelsea) and Gianluca Vialli (Chelsea), who enjoyed success in the English or Scottish leagues during the 1980s and 1990s, when the concept was at the height of its popularity and was used by even some of the biggest clubs. Dalglish won the double of the league title and FA Cup in his first season as player-manager, and went on to win two more league titles and an FA Cup before giving up playing completely five years after becoming manager, while Souness won three Scottish league titles and several cup competitions when he was player-manager of Rangers. He then succeeded Dalglish as Liverpool manager just before Rangers won another Scottish league title, but at the age of 38 he did not register himself as a player for Liverpool. In 1997, Ruud Gullit won the FA Cup with Chelsea in his first season as player-manager, also making history by being the first foreign and non-white manager to win a major trophy in English football. He was sacked nine months later, and Chelsea appointed another player-manager (Gianluca Vialli) in his place. Within weeks of taking over, Vialli guided Chelsea to victory in the League Cup, and two months after that, they won the European Cup Winners' Cup.

A number of bigger clubs have appointed player-managers on a temporary basis but not given them permanent contracts. Notable cases include Ossie Ardiles (Tottenham Hotspur) in 1987 and Dave Watson (Everton) a decade later, although Ardiles later returned to Tottenham as manager in 1993 after managing three other clubs. During the first decade of the 21st century, however, the concept gradually fell into almost total disuse and was normally only practiced by smaller clubs.[1] In March 2013, a BBC Sport article suggested that the concept of having a player-manager had gone out of fashion, with only two clubs in the English professional leagues using player-managers at that time.[1]

The chief executive of the League Managers Association stated his belief that the increased workload for managers had made combining the two roles difficult. The last permanent player-manager in the top flight of English football was Gianluca Vialli, who retired from playing in 1999 when he was the manager of Chelsea.[1] The governing bodies have also imposed requirements for managers to hold professional coaching qualifications, which few players obtain before retiring.[1]

There have been three player-managers in the Premier League since 2000: Stuart McCall, who managed two Bradford City games on an interim basis in late 2000, and Garry Monk, who was appointed interim player-manager of Swansea City in February 2014, after their manager, Michael Laudrup, was sacked.[1] Ryan Giggs was appointed player-coach at Manchester United by David Moyes on 4 July 2013 and Giggs served as interim player-manager until the appointment of Louis van Gaal on 9 May 2014 as manager following Moyes' dismissal. On the 6 May 2014, in what turned out to be his final game as a player, Ryan Giggs substituted himself on against Hull in the closing minutes at the age of 40.

While no Major League Baseball (MLB) team has been led by a player-manager in over a quarter of a century, they were once quite common. Cap Anson, Connie Mack, John McGraw, Ty Cobb, Tris Speaker, Joe Cronin, Mickey Cochrane, Lou Boudreau, Joe Torre, and Frank Robinson are among those who spent time as player-managers. In this capacity, Robinson became the first African-American manager in MLB history when he was named the Cleveland Indians' player-manager in 1975. Fred Clarke spent the longest time as a major league player-manager, serving as such for the Louisville Colonels from 1897 to 1899 and the Pittsburgh Pirates from 1900 to 1915.

The most recent player-manager in MLB was Pete Rose, who, upon being traded from the Montreal Expos to the Cincinnati Reds in August 1984, was immediately named the Reds' manager.[2] Rose managed and served as a backup infielder until the end of the 1986 season, when he retired as a player. (He continued to manage the Reds until 1989 when he was suspended indefinitely by MLB for gambling on baseball.)

Major league rules are somewhat different for trips to the mound by the manager if he is a player-manager (this is with regard to being required to change pitchers), and a player-manager puts himself into or out of the lineup just as he would any other player.