The 18 one-sided pentominoes, including 6 mirrored pairs 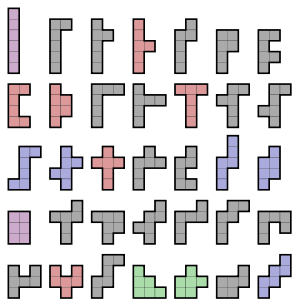 The 35 free hexominoes, colored according to their symmetry. 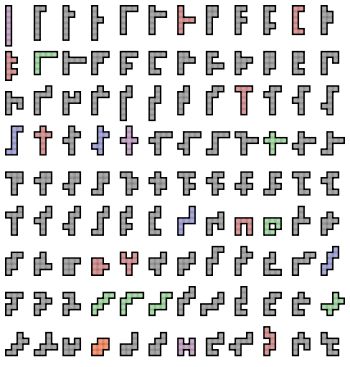 A polyomino is a plane geometric figure formed by joining one or more equal squares edge to edge. It is a polyform whose cells are squares. It may be regarded as a finite subset of the regular square tiling with a connected interior.

Polyominoes are classified according to how many cells they have:

Polyominoes have been used in popular puzzles since at least 1907, and the enumeration of pentominoes is dated to antiquity.[1] Many results with the pieces of 1 to 6 squares were first published in Fairy Chess Review between the years 1937 to 1957, under the name of "dissection problems." The name polyomino was invented by Solomon W. Golomb in 1953 and it was popularized by Martin Gardner in his November 1960 "Mathematical Games column" in Scientific American.[2]

Like many puzzles in recreational mathematics, polyominoes raise many combinatorial problems. The most basic is enumerating polyominoes of a given size. No formula has been found except for special classes of polyominoes. A number of estimates are known, and there are algorithms for calculating them.

There are three common ways of distinguishing polyominoes for enumeration:[4][5]

The following table shows the numbers of polyominoes of various types with n cells.

Polyominoes have the following possible symmetries;[8] the least number of squares needed in a polyomino with that symmetry is given in each case:

The following table shows the numbers of polyominoes with n squares, sorted by symmetry groups.

Algorithms for enumeration of fixed polyominoes

Most simply, given a list of polyominoes of order n, squares may be added next to each polyomino in each possible position, and the resulting polyomino of order n+1 added to the list if not a duplicate of one already found; refinements in ordering the enumeration and marking adjacent squares that should not be considered reduce the number of cases that need to be checked for duplicates.[9] This method may be used to enumerate either free or fixed polyominoes.

A more sophisticated method, described by Redelmeier, has been used by many authors as a way of not only counting polyominoes (without requiring that all polyominoes of order n be stored in order to enumerate those of order n+1), but also proving upper bounds on their number. The basic idea is that we begin with a single square, and from there, recursively add squares. Depending on the details, it may count each n-omino n times, once from starting from each of its n squares, or may be arranged to count each once only.

The simplest implementation involves adding one square at a time. Beginning with an initial square, number the adjacent squares, clockwise from the top, 1, 2, 3, and 4. Now pick a number between 1 and 4, and add a square at that location. Number the unnumbered adjacent squares, starting with 5. Then, pick a number larger than the previously picked number, and add that square. Continue picking a number larger than the number of the current square, adding that square, and then numbering the new adjacent squares. When n squares have been created, an n-omino has been created.

This method ensures that each fixed polyomino is counted exactly n times, once for each starting square. It can be optimized so that it counts each polyomino only once, rather than n times. Starting with the initial square, declare it to be the lower-left square of the polyomino. Simply do not number any square that is on a lower row, or left of the square on the same row. This is the version described by Redelmeier.

If one wishes to count free polyominoes instead, then one may check for symmetries after creating each n-omino. However, it is faster[10] to generate symmetric polyominoes separately (by a variation of this method)[11] and so determine the number of free polyominoes by Burnside's lemma.

The most modern algorithm for enumerating the fixed polyominoes was discovered by Iwan Jensen.[12] An improvement on Andrew Conway's method,[13] it is exponentially faster than the previous methods (however, its running time is still exponential in n).

Both Conway's and Jensen's versions of the transfer-matrix method involve counting the number of polyominoes that have a certain width. Computing the number for all widths gives the total number of polyominoes. The basic idea behind the method is that possible beginning rows are considered, and then to determine the minimum number of squares needed to complete the polyomino of the given width. Combined with the use of generating functions, this technique is able to count many polyominoes at once, thus enabling it to run many times faster than methods that have to generate every polyomino.

Although it has excellent running time, the tradeoff is that this algorithm uses exponential amounts of memory (many gigabytes of memory are needed for n above 50), is much harder to program than the other methods, and can't currently be used to count free polyominoes.

Asymptotic growth of the number of polyominoes

The known theoretical results are not nearly as specific as this estimate. It has been proven that

To establish a lower bound, a simple but highly effective method is concatenation of polyominoes. Define the upper-right square to be the rightmost square in the uppermost row of the polyomino. Define the bottom-left square similarly. Then, the upper-right square of any polyomino of size n can be attached to the bottom-left square of any polyomino of size m to produce a unique (n+m)-omino. This proves AnAm ≤ An+m. Using this equation, one can show λ ≥ (An)1/n for all n. Refinements of this procedure combined with data for An produce the lower bound given above.

The upper bound is attained by generalizing the inductive method of enumerating polyominoes. Instead of adding one square at a time, one adds a cluster of squares at a time. This is often described as adding twigs. By proving that every n-omino is a sequence of twigs, and by proving limits on the combinations of possible twigs, one obtains an upper bound on the number of n-ominoes. For example, in the algorithm outlined above, at each step we must choose a larger number, and at most three new numbers are added (since at most three unnumbered squares are adjacent to any numbered square). This can be used to obtain an upper bound of 6.75. Using 2.8 million twigs, Klarner and Rivest obtained an upper bound of 4.65.

A polyomino is said to be directed if it contains a square, known as the root, such that every other square can be reached by movements of up or right one square, without leaving the polyomino.

Polyominoes have fostered research in computer science and recreational mathematics. Challenges are often posed for covering (tiling) a prescribed region, or the entire plane, with polyominoes,[22] or folding a polyomino to create other shapes. Gardner proposed several simple games with a set of free pentominoes and a chessboard. Some variants of the Sudoku puzzle use polyomino-shaped regions on the grid. The video game Tetris is based on the seven one-sided tetrominoes (spelled "Tetriminos" in the game), and the board game Blokus uses all of the free polyominoes up to pentominoes.

Tiling regions with sets of polyominoes

Puzzles commonly ask for tiling a given region with a given set of polyominoes, such as the 12 pentominoes. Golomb's and Gardner's books have many examples. A typical puzzle is to tile a 6×10 rectangle with the twelve pentominoes; the 2339 solutions to this were found in 1960.[23] Where multiple copies of the polyominoes in the set are allowed, Golomb defines a hierarchy of different regions that a set may be able to tile, such as rectangles, strips, and the whole plane, and shows that whether polyominoes from a given set can tile the plane is undecidable, by mapping sets of Wang tiles to sets of polyominoes.[24]

Tiling regions with copies of a single polyomino

Beyond rectangles, Golomb gave his hierarchy for single polyominoes: a polyomino may tile a rectangle, a half strip, a bent strip, an enlarged copy of itself, a quadrant, a strip, a half plane, the whole plane, certain combinations, or none of these. There are certain implications among these, both obvious (for example, if a polyomino tiles the half plane then it tiles the whole plane) and less so (for example, if a polyomino tiles an enlarged copy of itself, then it tiles the quadrant). Polyominoes of orders up to 6 are characterized in this hierarchy (with the status of one hexomino, later found to tile a rectangle, unresolved at that time).[30]

In 2001 Cristopher Moore and John Michael Robson showed that the problem of tiling one polyomino with copies of another is NP-complete.[31][32]

Tiling the plane with copies of a single polyomino

Tiling the plane with copies of a single polyomino has also been much discussed. It was noted in 1965 that all polyominoes up to hexominoes[33] and all but four heptominoes tile the plane.[34] It was then established by David Bird that all but 26 octominoes tile the plane.[35] Rawsthorne found that all but 235 polyominoes of order 9 tile,[36] and such results have been extended to higher orders by Rhoads (to order 14)[37] and others. Polyominoes tiling the plane have been classified by the symmetries of their tilings and by the number of aspects (orientations) in which the tiles appear in them.[38][39] 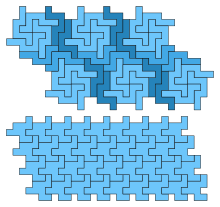 The two tiling nonominoes not satisfying the Conway criterion.

The study of which polyominoes can tile the plane has been facilitated using the Conway criterion: except for two nonominoes, all tiling polyominoes up to order 9 form a patch of at least one tile satisfying it, with higher-order exceptions more frequent.[40]

Several polyominoes can tile larger copies of themselves, and repeating this process recursively gives a rep-tile tiling of the plane. For instance, for every positive integer n, it is possible to combine n2 copies of the L-tromino, L-tetromino, or P-pentomino into a single larger shape similar to the smaller polyomino from which it was formed.[41]

A minimal compatibility figure for the T and W pentominoes.

The compatibility problem is to take two or more polyominoes and find a figure that can be tiled with each. Polyomino compatibility has been widely studied since the 1990s. Jorge Luis Mireles and Giovanni Resta have published websites of systematic results,[42][43] and Livio Zucca shows results for some complicated cases like three different pentominoes.[44] The general problem can be hard. The first compatibility figure for the L and X pentominoes was published in 2005 and had 80 tiles of each kind.[45] Many pairs of polyominoes have been proved incompatible by systematic exhaustion. No algorithm is known for deciding whether two arbitrary polyominoes are compatible.

The word polyomino and the names of the various orders of polyomino are all back-formations from the word domino, a common game piece consisting of two squares, with the first letter d- fancifully interpreted as a version of the prefix di- meaning "two." The name domino for the game piece is believed to come from the spotted masquerade garment domino, from Latin dominus.[46]

Most of the numerical prefixes are Greek. Polyominoes of order 9 and 11 more often take the Latin prefixes nona- (nonomino) and undeca- (undecomino) than the Greek prefixes ennea- (enneomino) and hendeca- (hendecomino).