In geometry, the square tiling, square tessellation or square grid is a regular tiling of the Euclidean plane. It has Schläfli symbol of {4,4}, meaning it has 4 squares around every vertex.

Conway calls it a quadrille.

The internal angle of the square is 90 degrees so four squares at a point make a full 360 degrees. It is one of three regular tilings of the plane. The other two are the triangular tiling and the hexagonal tiling.

This tiling is topologically related as a part of sequence of regular polyhedra and tilings, extending into the hyperbolic plane: {4,p}, p=3,4,5...

This tiling is also topologically related as a part of sequence of regular polyhedra and tilings with four faces per vertex, starting with the octahedron, with Schläfli symbol {n,4}, and Coxeter diagram

, with n progressing to infinity.

Like the uniform polyhedra there are eight uniform tilings that can be based from the regular square tiling. 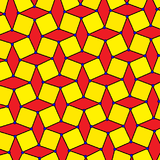 An isogonal variation with two types of faces

A 2-isohedral variation with rhombic faces

Other quadrilateral tilings can be made with topologically equivalent to the square tiling (4 quads around every vertex).

Isohedral tilings have identical faces (face-transitivity) and vertex-transitivity, there are 17 variations, with 6 identified as triangles that do not connect edge-to-edge, or as quadrilateral with two colinear edges. Symmetry given assumes all faces are the same color.[1]

The square tiling can be used as a circle packing, placing equal diameter circles at the center of every point. Every circle is in contact with 4 other circles in the packing (kissing number).[2] The packing density is π/4=78.54% coverage. There are 4 uniform colorings of the circle packings.