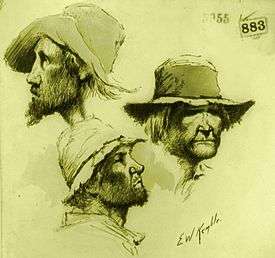 In the United States, Poor White (or Poor Whites of the South for clarity) is the historical classification for an American sociocultural group,[1] of European descent, with origins in the Southern United States and in Appalachia. They first emerged as a social caste[2][3] in the Antebellum South,[4] consisting of white, agrarian, economically disadvantaged laborers or squatters usually possessing neither land nor slaves.[5][6][7] In certain contemporary contexts the term is still used to pertain to their descendants; regardless of present economic status. While similar to other White Americans in ancestry, the Poor White differ notably in regard to their history and culture. 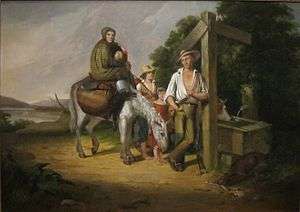 Throughout American history the Poor White have regularly been identified in differentiating terms;[8] the majority of which are often considered disparaging. They have been known as rednecks (especially in modern context), hillbillies in Appalachia, crackers in Georgia, and poor white trash. In the past the very use of the term, "Poor White" by the white Southern elite, who considered it an oxymoron, was to distance themselves from elements of society they viewed as "undesirable", "lesser" or "antisocial." It denoted a separation, reflective of a social hierarchy, with "poor" used to demonstrate a low position, while "white" was used to subjugate rather than to classify. Yet author Wayne Flynt in his book, Dixie's Forgotten People: The South's Poor Whites, argues that "one difficulty in defining poor whites stems from the diverse ways in which the phrase has been used. It has been applied to economic and social classes as well to cultural and ethical values."[1] While other regions of the United States have white people who are poor this does not refer to the Poor White in the same usage as it does in the South. In context the Poor White refer to a distinct sociocultural group who come from families with a history of multi-generational poverty and cultural divergence.

The character and condition of the Poor White is rooted in the institution of slavery. Rather than provide wealth as it had for the Southern elite, in stark contrast, slavery considerably hindered progress of whites who did not own slaves by exerting a crowding-out effect eliminating free labor in the region. This effect, compounded by the area's widespread lack of public education and its general practice of endogamy, prevented low-income and low-wealth free laborers from moving to the middle class. Many fictional depictions in literature used them as foils in reflecting the positive traits of the protagonist against their perceived "savage" traits.[9][10] In her novel Dred, Harriet Beecher Stowe illustrates a commonly held stereotype that marriage through them results in generic degradation and barbarism of the better class.[10]

“For the sake of dear dependents the will forces the weary muscles to act and knits the relaxed nerves. Surely, fatally, the joy dies out of the eyes of childhood, girlhood is but a flickering shadow, and maturity an enforced decrepitude, a lingering old age, a quenching of the fires of life before they half burn.”[11]

Clare de Graffenreid, "The Georgia Cracker in the Cotton Mills"

During the American Civil War the Poor White comprised a majority of the combatants in the Confederate Army (the Battle Flag, while controversial, is still seen by some as a symbol of Southern as well as personal identity); afterwards, many labored as sharecroppers. During the nadir of American race relations intense violence, defense of honor and white supremacy flourished[12] in a region suffering from a lack of public education and competition for resources. Southern politicians of the day motivated conflict between the Poor White and African Americans as a form of Political Opportunism.[8][13][14] As John T. Campbell summarizes in The Broad Ax:

In the past, white men have hated white men quite as much as some of them hate the Negro, and have vented their hatred with as much savagery as they ever have against the Negro. The best educated people have the least race prejudice. In the United States the poor white were encouraged to hate the Negroes because they could then be used to help hold the Negroes in slavery. The Negroes were taught to show contempt for the poor white because this would increase the hatred between them and each side could be used by the master to control the other. The real interest of the poor whites and the Negroes were the same, that of resisting the oppression of the master class. But ignorance stood in the way. This race hatred was at first used to perpetuate white supremacy in politics in the South. The poor whites are almost injured by it as are the Negroes. - John T. Campbell[13] 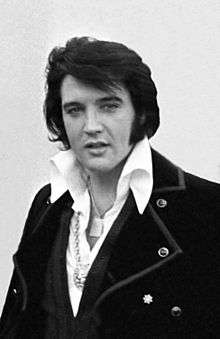 Elvis Presley, an icon of 20th-century America, was a Poor White born in Tupelo, Mississippi.

Further evidence of the hostility of the ruling class towards the Poor White is found in the enactment of the poll tax, which required an annual payment of $1.00 (equivalent to $26 in 2015),[15] to vote. The poll tax excluded not only African Americans, but also any Poor Whites who lacked the economic means to pay it.

In the early 20th century, the image of the Poor White was a prominent stereotype in American media. Sherwood Anderson's novel Poor White (1920) explored how a poor white youth from Missouri tried to adjust to a middle class world by moving to the Midwest.[16] The American eugenics movement encouraged the legalization of forced sterilizations. In practice, individuals who came from Poor White backgrounds were often targeted,[17] particularly institutionalized individuals and fertile women.[18]

The recruitment of the physically-fit individuals in the First World War conveyed the first practical comparisons between the Appalachian region, the South and the rest of the country. The Poor White were unequal in terms of income, education, and medical treatment than other White Americans; only African Americans in the Southern states fared worse.[19]

New Deal rural life programs such as the Resettlement Administration, the Farm Security Administration and the Tennessee Valley Authority and in the 1960s the Appalachian Regional Commission helped create new jobs for the rural poor, especially in the South.[20] The Second World War led to new economic opportunities; millions of poor farmers moved to industrial centers for high paying jobs. As the century progressed, economic and social conditions for the Poor White continued to improve. However while many social prejudices have since been lifted, popularized stereotypes surrounding the Poor White continued.[21]

Historically, especially in Appalachia, the Poor White lived simple lives greatly removed from Southern society. Some observers even subdivide the Poor White group further into the Appalachian "mountain whites" and those who live in the flatlands farther east and west.[22] Privileged whites (known in the South as the Bourbon class) had little interaction with them, oftentimes limited to no more than, "whom he would wonder see staring at him from the sides of the highway."[2] It is this lack of interaction and physical isolation[23] what allowed them to become regarded as an independent culture. Having little money, the Poor White had to make many of their own necessities by hand. They sewed their own garments and constructed houses in the fashion of log cabins or dogtrots.[1] Traditional clothing was simple: for men, jeans and a collarless, cuffless unbleached-muslin shirt; and for women, a straight skirt with a bonnet of the same material.[11] The Poor White survived by small-scale subsistence agriculture,[7] hunter-gatherering,[7] charity,[24] fishing,[7] bartering with slaves[7][25] and seeking what employment they could find.[7] Some found jobs in cotton mills and factories,[11] a process made easier by the fact that many slaveowners refused to use slaves for skilled labor because doing so would both increase owners' dependence on specific slaves and increase the likelihood that those slaves would run away in pursuit of self-employment elsewhere. Due to the historic lack of formal education in the South,[26] early Poor White culture focused more on artistic rather than intellectual pursuits. Significantly the Poor White have been crucial for their musical contributions to: Bluegrass, Country and Rock and Roll.

A broad characterization of the culture, of the decedents of the Poor White, includes such elements as strong kinship ties, non-hierarchical religious affiliations, emphasis on manual labor, connection to rural living and nature, and inclination toward self-reliance. In addition, individuals from backgrounds historically rooted among the Poor White still carry much of the culture and often continue many of the practices of their forefathers. Hunting and fishing, while practiced by their ancestors as a method of survival, is now seen as a means of recreation. Variations on folk music, particularly Country, still hold a strong resonance with their descendents, as instruments such as the banjo, dulcimer and fiddle have since become synonymous with their culture.